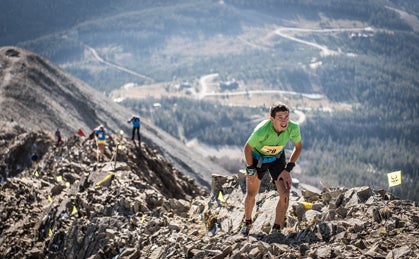 Running across the sky is every bit as challenging and beautiful as it sounds. Photo by Matt Trappe

In most cases, it probably runs on some nice singletrack; there are some climbs and descents, some rocks and roots. It might be a loop course. It might go past some terrific scenery.

But when you plug into YouTube later and see an athlete like Kilian Jornet prancing around the top of a 12,000-foot peak or descending scree fields like he’s skiing on snow, chances are it appears he’s running a different type of race entirely.

That’s because he is—sort of.

“Skyrunning” is a form of trail running, to be sure. But to earn this designation, a race has to be especially rugged (possibly leaving the proper trails for rocky footing), with high altitude and beautiful scenery.

“The idea with a Skyrunning race is to have it somewhere that has high altitude and big mountains, and to use them,” explains Ian Sharman, director of the U.S. Skyrunner Series, brand new in 2014. “On the other hand, a normal trail race might go on the trails around the mountain, and you can see it, but you don’t climb it.”

“Literally, we start in town, run to the summit and run back,” he continues. “It’s mountain running in its purest form.”

Now, thanks to Sharman and a handful of other national series directors, you don’t have to go as far as Europe to run one of these events. Skyrunner National Series (SNS) circuits debuted this year in nine different countries, including the U.S., with more to come in 2015 and beyond.

The U.S. series features 13 different races in three separate categories in 2014, and Sharman says there are plans to expand the race offerings in 2015, including to races on the east coast.

“[U.S. Skyrunning races] are meant to be just as cool as the European races,” says Sharman. “There’s no reason Americans can’t do it. We’re not worse runners, we’re not wimpier or anything like that.”

Competitive mountain running—Skyrunning—was conceived in the early 1990s by Italian mountaineer Marino Giacommeti, who organized races on mountains in France and Italy.

In 1993, the international Skyrunning circuit took off in earnest with the sponsorship of Fila and featured races in mountain ranges all over the world, from Europe and the Rockies to East Africa and the Himalayas. Giacommeti’s Federation for Sport at Altitude served as the sport’s governing body from 1995 until the International Skyrunning Federation took over in 2008.

Today, the international circuit—the Skyrunner World Series (SWS)—still has races around the world and awards points for the overall SWS title in each of three categories: “Ultra,” for distances approximately 50K or over; “Sky”, for races near the marathon distance; and “Vertical Kilometer (VK)”, in which runners run straight uphill, ascending one kilometer of vertical feet in a distance of five kilometers or less. Many SWS and SNS events offer races in multiple categories, which is why athletes like Jornet sometimes run a VK the day before an ultra.

One race in each category is designated the series Final, where points earned are worth 20 percent more toward the final standings. This encourages top contenders to show up for an ultimate “showdown” at the Final, Sharman says.

Each National Series operates similarly, with multiple races in each category. National events sometimes overlap with World Series races, and any SWS event in a given country will automatically be on that country’s National Series.

This year, both Utah’s Speedgoat 50K and The Rut 50K in Montana were parts of the SWS and U.S. Skyrunner Series alike, with The Rut serving as the SWS Ultra Final. As hoped, top contenders for the SWS title from around the globe, including Kilian Jornet, Emelie Forsberg and Anna Frost, came to Montana last weekend to duke it out for the series win.

Skyrunning may be new to the U.S., but Sharman says he hopes it can grow into a popular, mass-participation sport. He says while the races are meant to be challenging, they are not meant to be exclusive in their difficulty.

“For people who have run less challenging ultramarathons, they can see sky races as a next step, just like moving from marathons to ultras,” he says. “They are inspiring and a little intimidating, but that’s not the sole purpose. It’s just a case of going out and giving it a go, pushing out of your comfort zone, creating a new one, then pushing out of that comfort zone.”

They key, he says, will first be familiarizing U.S. runners with the concept and structure of Skyrunning. The first Series VK in the U.S. was July 27 at Copper Mountain, Colorado; the second was at The Rut and the third will be October 5 in Flagstaff, Arizona.

“People shouldn’t feel like it’s too hard for them,” says Sharman. “It should be fun and exciting and beautiful and that’s the idea behind it.”

He says he hopes Skyrunning can foster mass participation, in part by holding events on courses that can handle more people without concerns over conservation.

“With the exception of trampling over protected wildflowers or alpine tundra, the mountains are pretty hardy and they can take a thousand people running over the side of them,” says Sharman. He points out that The Rut is held on private land owned by Big Sky resort, and thus does not require the same permitting procedures as races held on public land such as national forests.

“[The Rut] is perfect to get people excited about [Skyrunning],”he continues. “You’ll get hundreds of people out there seeing these snowcapped peaks and running this beautiful course. And they’ll go ‘Wow, that’s amazing’ and want to do it again.”