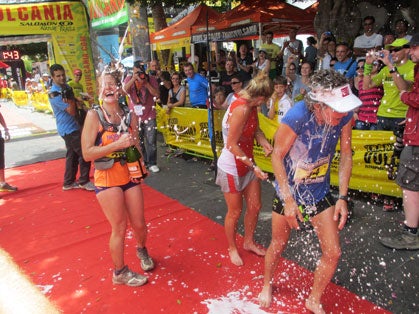 Photo by Ultra168 – The top three women at the finish.

American Dakota Jones, 21, won a thrilling duel in course-record time at the Transvulcania 50 Mile on La Palma, Canary Islands Saturday. Jones, who ran near the front for most of the race, came back from third place late in the day to edge Andy Symonds 6:59:07 to 7:00:34. He also finished over ten minutes ahead of reigning Western States and UTMB champion, Kilian Jornet, who led for much of the race but collapsed after finishing third, in 7:09:53.

“I did not plan to run in front all day, but I just ran my race and up front is where it happened to be,” says Jones. “It was a little intimidating, but I have run that distance enough to know how I feel, and that was what I could do.”

Jones, whose impressive rise includes a win at the Lake Sonoma 50 Mile in April, said that even he was surprised by the result. “I knew I had a good race in me, but I never expected to be able to run that well,” he says. “Everything just came together for me and fell apart for others, mainly Kilian.”

Jones emphasized that his beating Jornet, who has been all but invincible in mountain ultras in recent years, should not be cause for too much speculation.

“He had some trouble with the heat and all those effects combined allowed me to beat him,” Jones continues. “I have no assumptions that I could beat him in prime condition, but Saturday turned out really well.”

By comparison, New Zealand’s Anna Frost led wire to wire and had a comfortable margin of victory in the women’s race—despite being in a field whose top six finishers all broke the previous course record.

Frost finished in 8:11:30, nearly two hours ahead of Monica Aguilera’s previous record, 10:00:03, set last year (Aguilera did not finish the race this year), and over 40 minutes ahead of second-place Nuria Picas, who crossed the line in 8:51:59. Americans Nikki Kimball and Darcy Africa finished third and fourth, respectively, in 9:10:00 and 9:17:35.

Jones indicates that he might be back in the future to try and run the course even faster. “The race course is extremely beautiful and I would love to return,” he says. “The island and its people are all really special, and I am very lucky to have been able to experience this place like I did.” 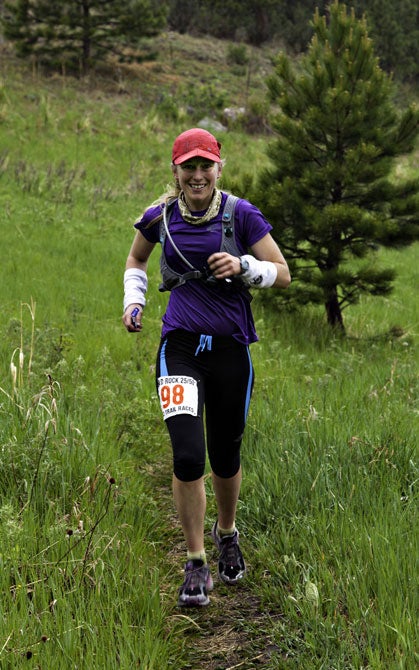 “The race was a great success for our first go around,” says Clark, who is also an elite trail ultrarunner. “We were psyched to register a finishing rate of about 80 percent.” 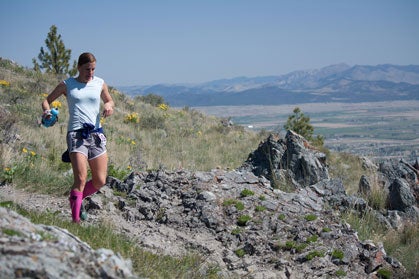 In the women’s division, Megan Kimmel of Silverton, Colorado, won the race for the second-straight year in 2:50:09.7, nearly eight minutes ahead of runner-up Sarah Keller of Billings, Montana.

The race, which is part of the 2012 La Sportiva Mountain Cup, was directed in part by local ultrarunner Martin Miller, who notes that the course has been altered since Hahn set the old record in 2009.

“We’ve made it substantially tougher and brought the total vertical climb up to over 4000 feet,” says Miller. “By this standard, Krar’s time is really a big improvement.”

The Ice Age 50, held in conjunction with a 50K and trail half marathon, was the second-to-last race in the Montail Ultra Cup (which concludes at Western States in California next month). Yet, despite the fast field, the course record of 5:54:4—set in 2000 by Daniel Held—survived.

Zach Bitter of Marinette, Wisconsin, won the race in 6:05:45—the second-fastest time ever on the course. Christopher Kollar of Missoula, Montana, finished second in 6:14:55, good for fourth all-time.

Denise Bourassa of Bend, Oregon, won the women’s division and placed 11th overall in 7:12:37, missing Luanne Park’s course record—also set in 2000—by a mere 54 seconds. Bourassa was over 22 minutes ahead of second-place finisher, Melanie Peters, of St. Petersburg, Florida.