Last Saturday near San Francisco, the 17th running of the Miwok 100K surprised veterans of the race with a radically revamped course that many called “brutal,” “epic” and “knock-your-socks-off tough.”

How tough? Consider that four-time winner Dave Mackey of Boulder, Colorado, set a course record there in 2008 of 7:53, and his previous slowest time on the course was 8:28. This year, he won the race in 9:14.

RELATED:3 Lessons From Foresthill At Mile 62 Of The Western States 100

What’s more, Mackey’s socks literally got knocked off. About 10 miles into the race, he felt friction on his heel and realized his socks had slipped down. He tried pulling them up, but they scrunched back down, which he blames not on the socks, but on his poor decision to wear his shoes a half-size smaller than usual. It didn’t take long for both heels to open up red, raw wounds, but Mackey ran on (see image, taken by Gary Gellin, on the next page).

After finishing, Mackey good-naturedly said his feet looked worse than they felt. “There was blood, but it wasn’t like my Achilles tendon was showing through or anything.” 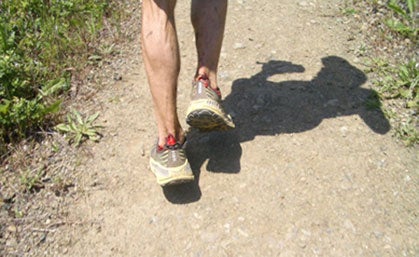 Less than 15 minutes behind Mackey, a dramatic race for second place played out as Jesse Haynes of Vista, California, appeared from several minutes back to almost (but not quite) catch Chris Price of Pasadena, California. Showing that seconds can matter in ultras, Price finished second in 9:28:30 and Haynes in third, with a time of 9:28:55.

Tina Lewis of Boulder, finished first female and 12th overall in 10:35, followed by Bethany Lewis (no relation) of Salt Lake City in 10:49. For both, it was a first 100K and a first Miwok. They finished more than a half-hour ahead of the other women. Helen Cospolich of Breckenridge, Colorado, placed third in 11:22.

Repeat finishers’ times were one to two hours slower than past years, and of the 350 starters, 264 (75 percent) finished (the race typically has a finishing rate of 80 to 90 percent).

The new, slightly long course started and finished in the coastal hamlet of Stinson Beach and climbed about 13,000 feet over eight major hill profiles. After a short warm-up through the village, runners ascended a trail that rises over 1700 feet in just 2.5 miles on singletrack in the dark. Then, in another change from prior years, runners plunged down from that ridge on the highly technical Matt Davis Trail with many steps and roots to return to Stinson Beach for the mile 26 aid station.

From there, runners headed 1300 feet up the famous Dipsea Trail over to Muir Beach (mile 33) and spent the next 21 miles climbing multiple ridges on fire roads that ring the Marin Headlands and overlook the Golden Gate. Then it was back to Muir Beach and back over the Dipsea, hop-scotching on wooden steps through the redwoods to the beach.

Jimmy Dean Freeman of Los Angeles, who finished 24th in 11:18, was one of several runners who said the double return to Stinson Beach—first at the marathon point, then at the finish—contributed to the new course difficulty. “We had steep climbs and descents four times, and you can’t run super fast on a really technical downhill. … I was an hour and a half slower than last year.” But, he adds, he liked the new course and “absolutely” thinks it should stay.

Race director Tia Bodington says she changed the course for two main reasons: one, because officials with the Golden Gate National Recreation Area asked her not to use the former start/finish area at Rodeo Beach due to wetland restoration; and two, because state park regulations no longer allow runners to cross the highway near the former aid station at Pantoll campground. Eliminating that stretch near Pantoll necessitated having runners run back down to Stinson, Bodington says.

“Most runners crossed the finish line saying, ‘Wow, that was hard, but I had a great time and that was a great course,’” says Bodington. “I kept thinking people would come across the line complaining, but they were really happy they had met the challenge.”

The perfect weather and panoramic views probably lifted moods. Temperatures reached the 70s in a dazzling clear sky, and a full moon started and finished the day. Well-stocked aid stations and the support of some 120 volunteers also kept the day running smoothly.

Registration for the 2013 Miwok 100K opens in late November and will be through lottery since roughly twice as many runners seek to enter than permitted spaces available. Website: http://www.run100s.com/miwok/

Sarah Lavender Smith is a Bay Area writer who blogs about trail running and travel at TheRunnersTrip.com. She finished her first Miwok 100K last Saturday placing 19th female in 13:08.