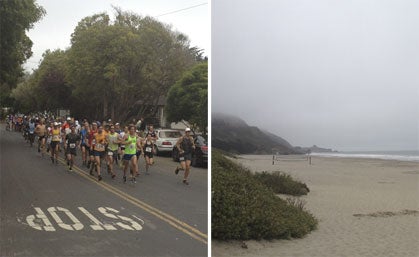 Last weekend, runners descended on Stinson Beach, California, for the ninth race in this year’s La Sportiva Mountain Cup–the Table Rock 27K. Conditions were cold and foggy at the start of the race, with racers shivering in the 50-degree air waiting for the starting gun. However, as soon as the gun went off, racers warmed up with a grueling 2000-plus-foot climb over the first 2.6 miles. After leveling out above the low-hanging clouds, racers dropped back into the fog for a welcome bit of cooler air before the second climb.

The rolling terrain and tight turns between these climbs proved to be a challenge for many. Says Buddy Jones, 41, of Chino Hills, California, “I felt good on the first major descent, but going back uphill killed my pace; I had to slow way down on the second climb.”

However, the rolling terrain didn’t slow everyone down. Pending final results, it appeared the top three men all went under the previous course record. California local Galen Burrell, 34, led the race and established a speedy 6:49 pace to bring home the win in 1:54:31, with Jordan McDougal, 26, of Linden, Virginia, several minutes behind in second, and Matthew Laye, 32, of Sausalito, California, close on his heels for third.

Caitlin Smith, 32, of Oakland, California broke the women’s record by two minutes, taking the women’s race in 2:19:49. Smith overtook other top women, Alison Bryant, 34, of Elkin, North Carolina, and Maria Dalzot, 25, of Bellingham, Washington (and author of our newly minted ‘Ask the Dietitian’ column!) around 10 kilometers in and never looked back. Dalzot wrote later in a race report on her blog, “The faster I ran, the further ahead [Smith] got. Before long I was all alone on a hillside with wind blowing sideways, thick fog and 50 switchbacks to navigate.”

At the end of the day, the Mountain Cup standings are still up in the air, waiting for the last race, next weekend’s Jupiter Peak Steeplechase in Salt Lake City, Utah, to decide all. Jordan McDougal retains his lead in the men’s race, however he has reached his five-race points cap, and it will be a tight race with Matt Byrne who plans to race next weekend in Salt Lake City. With the right conditions and a big win here it is still possible for Byrne to take the gold. On the women’s front, Megan Kimmel retains her solid lead and will walk away with the first-place finish. Bryant’s third-place finish at Table Rock secured her second place in the cup. Third in the cup remains up for grabs between Laura Haefeli, Alison Naney and Susan Nuzum.