Mike Wolfe and Daniel Kraft both break the course record at Montana’s Bridger Ridge Run; two veterans go down to the wire in the women’s race 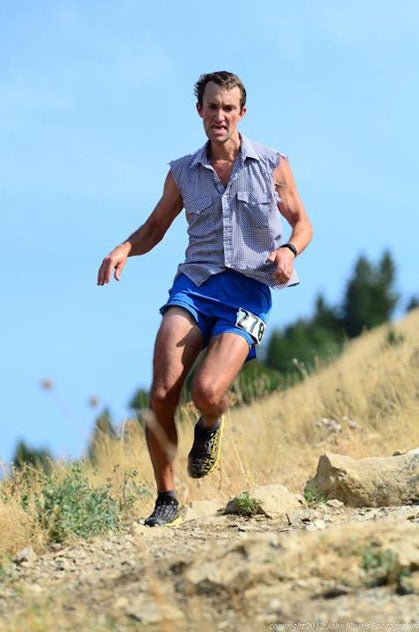 Although Mike Wolfe (pictured above) had doubts about his racing form going into the Bridger Ridge Run Saturday, he certainly didn’t show it.

“Since Western, I’ve felt flat, like my recovery has taken longer than normal,” says Wolfe. “Maybe I did too much too soon right after Western.”

Wolfe, who also lives in Missoula, says he cut his training volume significantly in the three weeks leading up to Bridger, and that he knew his fitness was much improved compared to the last time he ran the race six years ago. So, he went into race day with the goal of not only breaking Creel’s course record but breaking the three-hour mark, too. “In my mind, I’ve had a disappointing race season this year,” he says. “I was keen to have a good race last weekend.”

Though the women’s field was missing the top-end talent it usually draws—Bozeman’s own perennial favorite and course record-holder, Nikki Kimball (she ran a 3:43:49 in 2009), was not competing, and Boulder, Colorado’s Krissy Moehl pulled out just before the race with an injury—it was still a dramatic and close-fought affair. Bozeman’s Minde Erickson finished barely two minutes ahead of Jackson, Wyoming’s Alyssa Larsen, and the two Bridger Ridge veterans were never more than a few minutes apart throughout the race. Erickson took a wrong turn partway through the race, allowing Larsen to lead, but with less than a mile remaining, Larsen chose a difficult route down a steep descent. Erickson took an easier route and pulled ahead, holding the lead to the finish in 4:13:17. Larsen crossed the line in 4:15:22.

Race Director David Summerfield noted that the course was in good condition thanks to last-minute luck. “After a whole summer of no rain, the conditions up in the Bridger Range were bleak. The dirt had turned to dust and the steep portions were covered in loose pebbles,” he says. “I requested rain, and it came in a torrent Friday night. … The trail conditions could not have been better.”

Not that the course was particularly easy.

“There is a ton of rocky, technical terrain that you have to really focus on and not lose your stride, in order to maintain a fast pace,” says Wolfe. “It’s terrain that is hard to move fast on. And you have to be comfortable running the steep downhills at a borderline reckless pace.”

Part of the course’s challenge, according to Summerfield, is that, in keeping with the race’s laid-back tradition, it is unmarked. The race avoids sponsorship and all profits from registration fees go toward maintaining the trails. Competitors, meanwhile, are simply instructed to make it from the start at Fairy Lake Campground to the finish, at the “M” parking lot on Bridger Canyon Road.

“This is a route-finding race, not unlike an adventure race, even though the course has been run by thousands of runners by now,” he says, also noting that worn rocks and dirt tracks provide a route for those unfamiliar with the ridge. “We basically don’t mark the course anymore. As many have found out, the more challenging the terrain, the more rewarding it is to have negotiated it successfully.”

It is no coincidence, Summerfield says, that local runners tend to fare well on the Ridge.

“We are usually off top-notch runners’ radars … except for the fact that Bozeman has become a mecca for ultrarunners,” he says. “Many like the low-key atmosphere.”

For more information about the Bridger Ridge Run, visit the website.