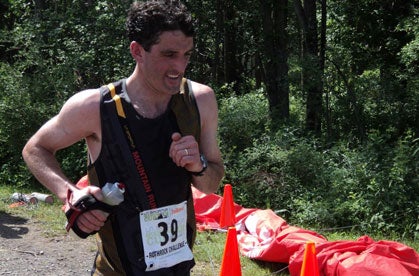 Competition heated up in Pennsylvania this week as the La Sportiva Mountain Cup’s seventh race of the series, the RothRock Challenge 30K, enticed many fierce competitors. With temperatures in the 90s on Saturday, the nearly 400 registered racers faced not only sweltering heat, but also snakes, including a massive four-foot rattler, soaking up early summer rays in the center of the singletrack.

Snakes and heat aside, the RothRock course is a challenging one, beginning with a 1.2-mile climb that gains close to 1100 feet—an average of 17-percent grade. Mountain Cup leader Jordan McDougal, 25, of Warrenton, Virginia, describes RothRock as “the most technically demanding course I’ve ever run.” Along with other top Mountain Cup contenders—Matt Byrne, Pat Casterline, Jason Bryant, Megan Kimmel and Alison Bryant—McDougal toed the RothRock starting line.

Defending her solid lead in the women’s Mountain Cup, Kimmel, 32, of Silverton, Colorado, led the women’s race—though Pennsylvania local Ashley Moyer, 25, gave her a run for her money. The women pushed each other the whole way, with Kimmel finishing in 3:13:19, and Moyer right on her heels 20 seconds later—both nearly 20 minutes ahead of third-place finisher Meira Minard, 39, of State College, Pennsylvania. 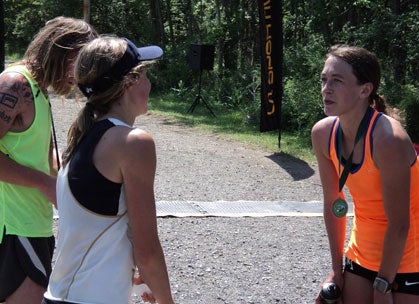 On the men’s side, the battle was an equally fierce one between the top two competitors. Gabe Rodriguez, 35, of Baltimore, Maryland, blasted off the start line and maintained his lead for the first dozen miles before McDougal caught him. As the two left the third aid station together, says Rodriguez, “Immediately we had to scramble up a mountainside—basically rock climbing for a couple of miles—and he was gone.”

Rodriguez describes catching up to an electrolyte-depleted McDougal again in the final few miles. They continued to battle for the lead, with McDougal once again seizing the lead on a rocky descent a few minutes from the finish. Rodriguez describes running a sub-5-minute-per-mile pace on the final road stretch in an effort to catch McDougal, but to no avail. McDougal came across the finish line in 2:41:48 for the win, with Rodriguez crossing 36 seconds later—more than 12 minutes ahead of third-place finisher Matt Byrne, 37, of Scranton, Pennsylvania, running on his home course.

Many runners dove into the lake at the finish to cool off after challenging themselves on such a tough course in grueling conditions.

Full results from the RothRock Challenge can be found here.