Why I line up at the Imogene Pass Run

I’m shivering on Ouray’s Main Street, afraid to even look up at the peaks 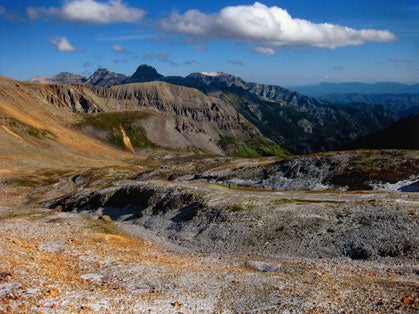 I’m shivering on Ouray’s Main Street, afraid to even look up at the peaks that rise before me. This is my third year running this race, yet part of me wants to skip out before it even starts. Why am I here? I already won a bar bet by running it the first year. No medals ever come my way. And this isn’t even a race for charity. Why spend half a year, every year, training for this race?

To some, the annual Imogene Pass Run, a mountain race from Ouray to Telluride, Colorado, sounds as appealing as willingly sending yourself off a cliff, something that could really happen to me on the descent. Why would anyone run 17 miles over a 13,000-foot pass? Surely, there are better ways to spend a Saturday morning. This race, which is now in its 38th year, is just the leftover dream of Rick Trujillo, who, while training for the Pikes Peak Marathon, decided to run home to Telluride from work at the Camp Bird Mine in Ouray. When a few of Rick’s buddies learned of his adventure, they bet him a round at the bar that they could beat him next time, and a “race” was born.

I look up at the San Juan Mountains, still locked in the steely blue shadows of early September. I am already exhausted; I woke up for the 5 a.m. bus to Ouray from my home in Telluride after a night of tossing and turning, worrying about whether I’d make the cut-off time halfway to the top. The race will disqualify you if you don’t reach Upper Camp Bird in two and a half hours.

And a fit racer at the front of the pack is doing a good job of re-stirring my fears. “If you don’t reach the summit by noon,” she calls out to the crowd at the starting line, “they turn you back to Ouray!”

Part of me wants to say she’s just fear mongering … but she’s not. Every year, a hundred or so runners suffer up to the final aid station only to find that they haven’t made it in the allotted time and must turn around.

Because of the 6000-foot climb, Imogene Pass’ 17 miles feel more like a marathon. Breathing is challenging going up; control on the loose scree is challenging going down. A solid third of the competitors come into Telluride with bloodied hands, knees or both.
I have had my own share of battle wounds from the race. A gash extending the length of my shin one year, a twisted ankle the following year and dizziness coupled with an intense desire to pass out during both. There are close to 1000 runners at the starting line. No one would notice my absence.

Except, of course, there’s my neighbor from across the street, and the one from around the corner, a few dozen friends and my husband. Half of Telluride is here.

I glance up and down Ouray’s Main Street, a tight collection of brick buildings, old Western storefronts, Victorian houses and wooden shacks. The first few leaves on the aspens have turned gold. It’s just a small town, made smaller by the huge mountains that rise from it on all sides. It’s a town much like my own.

The starting gun sounds. I glance down at the pink good-luck silly bandz around my wrist that my four-year-old, Siri, gave me the night before, and I begin the long slow climb into the mountains. Only a few switchbacks later, it’s hard to breathe. Ouray looks as small as a village in a train set.

Every step is a struggle as I climb the dirt road. It’s as if there are sacks of mining gear attached to my ankles. For a solid mile I want to vomit. When the ground becomes rockier, I have to scramble for a moment on all fours. A voice inside me warns me to turn around, but another voice ignores the call. … Ouray is already too far below.

Then the trail to Imogene’s summit levels, and for a rare moment on the climb, I get to head downhill to a stream crossing. I find my stride, and look around at the granite walls rising along the sides of the road. The stream beside me rambles like a banjo in an old bluegrass song. I feel content.

All of my morning training runs have led me to this, to this sport called trail running that I’m not very good at, but nevertheless love. The Imogene Pass Race is really just an exclamation point at the end of the sentence, a graduation ceremony at the end of the summer. The race is what motivates me to get out of bed at 6 before my family wakes. Other than the occasional half-marathon and marathon, this is the only real race I come back to again and again.

And although I dread Imogene all year, when I reach the summit, I’m filled with the kind of joy that only comes through exhaustion. Cheering spectators ring cowbells at the summit while volunteers pass out steaming cups of soup. A sea of mountains drenched in a dusty blue light stretches out in every direction, and below them are waterfalls, the remains of an ancient mining camp and, after seven miles of a challenging descent, home.

This year, when I reach the top, my husband, Andy, is waiting for me.

“Great work, you’ve got this,” he says, handing me a pile of peanut M&Ms, my favorite. “You’re going to get your time goal.”

I shrug as if it doesn’t matter. But suddenly, with him beside me, it does. The under-four-hour time mark has eluded me for years—why not go for it?

I wave off the cup of soup and start running quickly. Andy confessed later that he was worried I might fall off the edge of one of the cliff bands.

The trail ends and we hit asphalt during the last stretch of the race. I have squashed my time goal by almost 12 minutes. Even better, everything I love is all around me: my town, my friends and my family.
I’m grateful I didn’t duck out at the start. If I can do this race, what else can I do? Tomorrow, I’ll let the dreams begin. For tonight, I’ll just ice my knees and grab a beer with some friends. Odds are, though, after a few rounds at the bar, there’ll be another bet, and I’ll be back at the starting line again next year.

When Emily Brendler Shoff is not sprinting down Imogene Pass, she’s sprinting after her two girls, ages five and two. She writes and teaches in Telluride, Colorado.