Europe’s Ultra-Trail du Mont-Blanc is a festival of high mountains, international talent, quads of steel and the occasional helicopter rescue 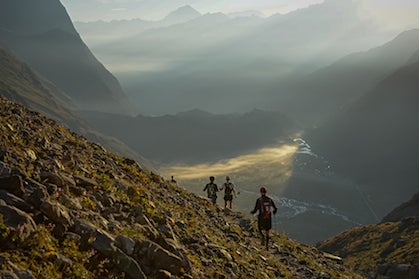 Last weekend, some 8,000 runners descended on the town of Chamonix in the French Alps to participate in the 13th annual Ultra-Trail du Mont-Blanc (UTMB) or one of its four sister races.

On the slightly-longer-than-usual course this year, which passes through France, Italy and Switzerland on its circumnavigation of Mont Blanc, French runners swept the competition. Xavier Thevenard handily won his second UTMB by 48 minutes, while Nathalie Mauclair scooped up the women’s win by well over an hour. (2013 and 2014 women’s champion Rory Bosio did not return to Chamonix to defend her title.)

After journeying from our respective homes in the U.S. to participate in the race festivities in Chamonix, we highlight seven things that stood out in this year’s race: 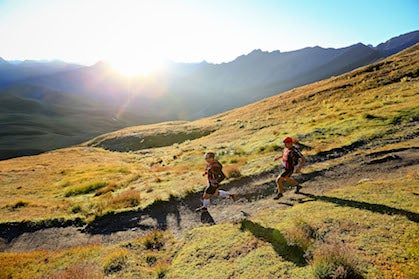 Race Director Catherine Poletti’s pre-race comment suggesting runners could choose between a forecast that was either hot and beautiful, or beautiful and hot, was prescient. It was both—in spades.

For a race often known for challenging mountain storms, 2015’s edition was a pleasant anomaly. Cloudless skies and a near-full moon allowed many to experience hours of headlamp-free travel around the Mont Blanc Massif. Saturday’s heat took its toll, though, with 931 of the 2,563 starters dropping out. Many cited issues related to the heat: temperatures drifted into the low 90s during the day.

Beau? Without a doubt. Chaud? A bit too much, thank you.

Few 100-milers in the world offer as much vertical as UTMB and Colorado’s famed Hardrock 100; each race boasts some 33,000 feet of climbing. With just seven weeks between these two monster races, it takes a hearty soul to even dream of attempting both in a single summer—let alone placing well in either.

Yet Darcy Piceu, 40, of Boulder, Colorado, did just that. After taking second at Hardrock last month and putting her legs up for several weeks, she traveled to France in early August to begin preparing for UTMB—and, late Saturday evening, was the fifth woman to cross the finish line in Chamonix.

“The heat brought another element,” wrote Piceu in a short report following the race. “I could tell by the 30K point that my legs did not have much spunk in the them … achy and sore from that point on. It was always a question whether I was recovered enough from Hardrock (probably not). But coming all this way with family made me want to keep going.” 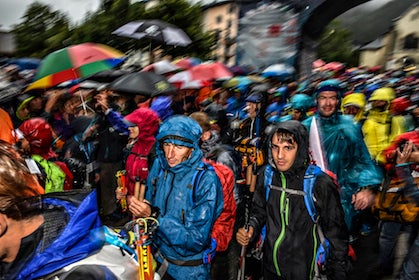 Participants in the 2015 edition of PTL experienced more of the stormy weather that’s been a hallmark of UTMB in past years. Photo by Pascal Tournaire/courtesy of Ultra-Trail du Mont-Blanc

Starting in 2006, UTMB began including other races during the same week. Today, there are four more acronyms, ranging from the downright pleasant stroll of the 53-kilometer Orsieres-Champex-Chamonix (OCC) to the six-day-long, comically named Petite Trot à Leon, whose route this year wended along 307 kilometers (191 miles) with over 26,000 meters (85,300 feet) of climbing.

The already-epic PTL course was still more challenging this year, incorporating all the favorite cols of mountaineer and PTL founder Jean-Claude Marmier, who passed away at 71 while doing recon on the route last year. A poignant gesture, though perhaps the quads of participants might have wished for something a bit more conventional?

Moments of duress abounded on the PTL, including one team reportedly receiving a helicopter rescue after a shepherd spotted them descending the wrong—and highly technical—arête.

4. The Battle for Third 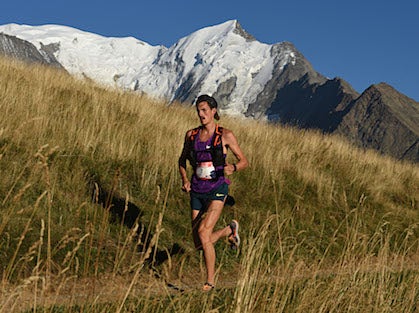 David Laney steadily making his way up through the field for third place. Photo by Pascal Tournaire/courtesy of Ultra-Trail du Mont-Blanc.

American men have notoriously struggled to snag podium spots at UTMB—but this year, they made a relatively strong showing, with a record three finishing among the top 10.

Perhaps most impressively, a 22-hour battle boiled down to a sprinting duel to the finish between David Laney, 26, of Ashland, Oregon, and Seth Swanson, 36, of Missoula, Montana. Ultimately, Laney edged out Swanson by just 28 seconds for third place, then waited at the finish line to give his compatriot a hug.

In his first 100-miler attempt, Sage Canaday, 29, of Boulder, Colorado, suffered an unfortunate fall on the course around 65 kilometers into the race. In his own words, he “clumsily tripped on a large rock and then ‘super manned’ into another.”

Despite a severely bashed-up knee that ultimately required stitches, he continued hobbling along the course for several hours before dropping at the Bertone aid station, where a helicopter took him back to Courmayeur.

“Sometimes things don’t work out the way you want them to,” says Canaday, “but the experience over here in the mountains has been amazing and the process of training for this race alone was a real gift.”

The UTMB is the United Nations of trail running, with a whopping 89 countries represented between the main event and its sister races. Is there a race out there that’s more internationally diverse? 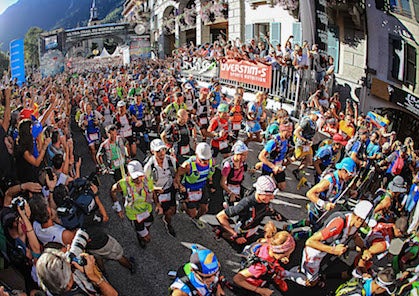 The start of UTMB. Photo by Franck Oddoux/courtesy of Ultra-Trail du Mont-Blanc

Race bibs feature runners’ full names and home-country flags. Add thousands of rambunctious onlookers lining ancient village roads, and it’s hard not to feel like you’re representing your nation at the coolest mountain party ever. (Hat tip the local partiers at Col Montets who chanted “U.S.A.! U.S.A.! U.S.A.!” One of us needed it.)

7. We Want His Genes

Battling a 46:30 cutoff, 73-year-old Christophe Geiger of Switzerland crossed the finish line with just five minutes to spare. It was his fourth consecutive—but first successful—attempt at completing the race. The only participant in the Veterans 4 division, he became the oldest finisher of UTMB in its 13 years of existence, and was arguably the most admired and beloved person in the Chamonix valley this week. 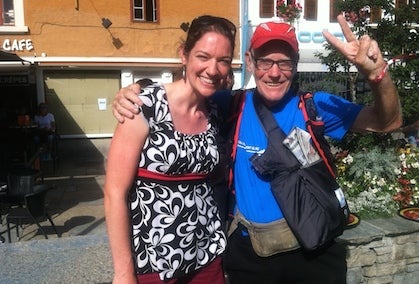 Christophe Geiger posing with Yitka Winn on the streets of Chamonix, the day after the conclusion of the race.