The 2014 running of this stupendous, grueling race packed some surprises 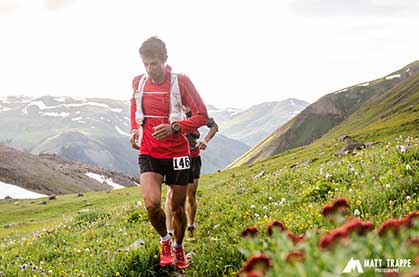 Taking place on July 11-13, the 21st running of the legendary Hardrock Hundred Endurance Run—a mind-boggling mountain odyssey with 34,000 feet of climbing over the rugged San Juan Mountains of southwest Colorado—dished up more than its usual fair share of surprises. Herewith, a quick look at five crazy events from the day.

The biggest news of the day(s)? The Catalonian Kilian Jornet took first place in a ridiculous, new, course-record time of 22 hours 41 minutes, shattering Kyle Skaggs’ 2008, once-thought-untouchable mark of 23 hours 23 minutes. En route to victory, the runner known as Kilian was seen firing down a tequila shot at the Kroger’s Canteen aid station, flossing his teeth with grass, taking photos all along the way and generally having a grand time, as other runners suffered the usual wrath of Hardrock’s 68,000 feet of ascending and descending, extreme altitude, terrifying thunderstorms and heinous rough trails. 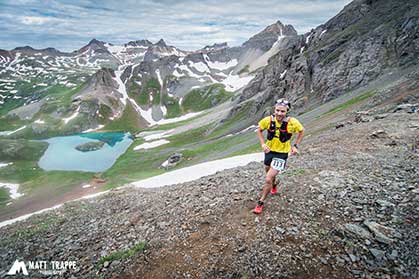 While near the summit of one of the race’s toughest obstacles—14,058-foot Handies Peak—Adam Campbell of Calgary, Alberta, and his pacer were zapped by lightning. Fortunately, Campbell’s Petzl headlamp bore the brunt of the damage—“My headlamp blew up,” said Campbell at the finish line. Undaunted, Campbell continued to a strong third-place finish. 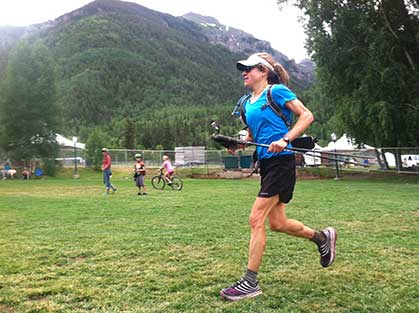 3. Ships Passing in the Night.

For the third year in a row, Diana Finkel (above) of South Fork, Colorado, dominated the women’s race and held a substantial lead over her nearest competitor, Darcy Piceu (below) of Boulder, Colorado—until, once again, she was forced to drop with a potentially serious health issue late in the race, this time at the Maggie aid station (mile 85.1). 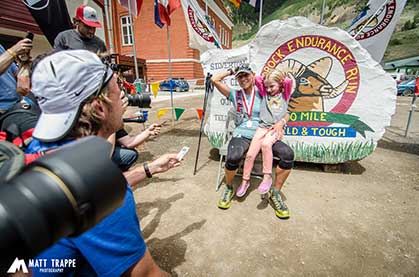 Piceu at the famed rock at the finish line. Photo by Matt Trappe.

When Piceu arrived at Maggie, just minutes after Finkel had been transported from the aid station, the volunteers neglected to break the information that she was now the lead woman. She spent but a few seconds at the aid station, before blasting out trying to run down the imaginary Finkel. Fortunately, Piceu’s pacer lingered at Maggie, eventually gleaning that Finkel had dropped, caught Piceu and delivered the news. So, for the third year in a row, Piceu soldiered on to victory in the women’s race. 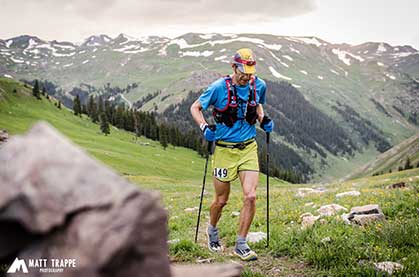 Jason Koop, prior to “cooping” up in the tent of a stranger. Photo by Matt Trappe.

After leaving the Grouse Gulch aid station over halfway through the race, several runners, including Jason Koop (above), Tsuyoshi Kaburaki (see next page) and Jeff Browning, ended up hunkered down together, watching lightning strikes on Handies Peak above them, try to decide whether to continue. At one point, several backpackers joined the group, and, says Koop of Colorado Springs, “We basically had a gear swap. The less frigid hikers and pacers were literally giving the jackets off of their back to the runners. I think I had two jackets, a hat and gloves from a random assortment of people.” Diana Finkel (see previous page) ended up in the group as well.

While Kaburaki, Browning and Finkel decided to forge on up Handies, an increasingly freezing Koop headed back down to seek refuge in a random backpacking tent he had seen. He provides this account: “I threw open the rain fly. the first thing I saw as a half drunk bottle of Southern Comfort on the floor, which was covered in about two inches of water. I threw myself into the tent, which smelled of weed and whiskey and had no business being a formidable shelter at parking lot at the beach, much less in the backcountry, much less at 12,500 feet in a storm. The two guys in the tent could care less that they had a hypothermic person in the tent with them. … So, I just emptied all of their stuff sacks to find warm and dry clothes. I bundled up in whatever clothes I could find and a POS sleeping bag to try to stave off becoming a popsicle.”

After warming for 45 minutes, Koop summoned the energy to summit Handies Peak and stumble down to the Burrows Park aid station, where he sat in a running vehicle for over an hour, then ran on to the Sherman aid station at mile 72, where he eventually dropped. 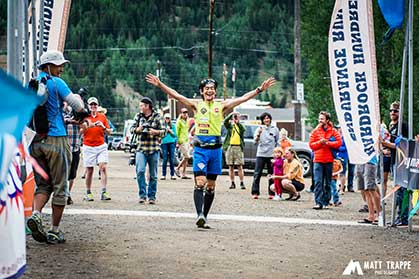 Kaburaki at the finish line in Silverton. Photo by Matt Trappe.

While running up Bear Creek Trail (one of three in the San Juans!), this the one out of Ouray, early on, the Japanese runner Tsuyoshi Kaburaki was hit in the jaw and badly cut by rockfall. The renowned veteran Kaburaki took the hit in stride, got patched up and marched to a sixth-place finish.