Bigfoot, banjos and bedlam on the trails of Ophir, North Carolina

When race director Kim Page issued this pre-race warning, “Watch out for Bigfoot and military men … 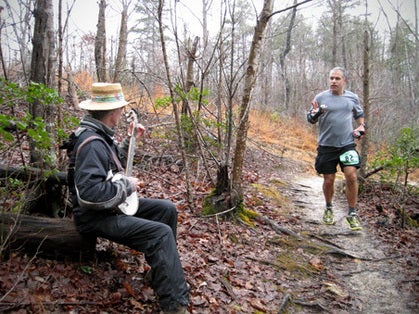 When race director Kim Page issued this pre-race warning, “Watch out for Bigfoot and military men carrying automatic weapons,” runners suspected they were in for an adventure at the Uwharrie Mountain 40-, 20- and Eight Mile Runs on February 5th. The cable channel Animal Planet had sent film crews to Uwharrie in the hopes of capturing Bigfoot on video, after a Salisbury, North Carolina, man claimed to have made a local sighting. Meanwhile, United States Army Special Forces were also in the forest, performing intensive military exercises. “I was shocked to see three guys in camouflage carrying automatic weapons three feet away on the first hill,” says Alicia Parr of Durham, North Carolina.

And then there was the banjo player, Bruce “Goofus” Wilks, whom 20-mile racer Annette Bednosky of Jefferson, North Carolina, describes on her blog as “a magic man, working his mouth over a harmonica” while strumming a banjo. Goofus was perched on a log near the 40-mile turnaround, picking and singing:

Fall on my face,

Now in its 20th year, the Uwharrie Mountain Run is no longer a local secret. Getting into the race is almost as tough as finishing. This year’s eight- and 20-mile races filled up in about 10 minutes, the 40-mile in under 30. But saying “I do” to Uwharrie this year was the easy part. The real commitment came on race day, when rain turned the already tenuous footing into a leafy, muddy game of slip-and-slide.

Uwharrie’s elevation chart warns runners, Don’t expect any flat ground here, with jagged spikes resembling the EKG of a palpitating heart—2350 feet of elevation gain in the 20-mile and 4500 feet of elevation gain in the 40-mile. Racers set out on 100 yards of pavement that quickly changed to singletrack bedlam: hidden roots, rocks, mud, creeks and hills. Parr describes the downhill miles as treacherous: “To prevent myself from falling, I had to grab onto saplings as I traversed a steep mud-slicked, rock-strewn pitch.”

In the 20-mile, Ryan Woods of Boone, North Carolina, won by just one minute over Jared Scott from Grand Canyon, Arizona. Praising the aggressive lugs on his lightweight trail racers, says Woods, “I made up a lot of ground on the curvy downhills, because I was confident in my footing in the soft mud.” Woods reeled in the early leader, Tom Clifford of Wilmington, North Carolina, who in his first trail race ever, opted for track spikes. Clifford paid the price for this mistake, rolling his ankle almost every mile, but managed to hang on for third.

In the 40-mile event, Shannon Johnstone of Cary, North Carolina, managed to point, shoot and run, snapping photos of the course and her competitors as she claimed victory in the women’s 40-mile. Her pre-race ambitions were admittedly modest. “My one and only goal was not to cry,” says Johnstone. In 2010’s race, she slipped in a stream crossing and at an aid station five miles from the end, sat down and almost called it a day. She dragged herself to the finish, crying, and swore to her husband, fellow trail runner Anthony Corriveau, that she would never return. “Then a few days passed,” says Johnstone. “And I thought maybe it would be fun to try it again.” Uwharrie is the Medusa of trail races, luring runners into its clutches despite the dangers.

“Every runner needs to put Uwharrie on their bucket list,” suggests Brendan Howell, second-place finisher in the eight mile. If not for the course or the camaraderie, then perhaps for the strange company out on the Uwharrie trail: Bigfoot trackers, camouflaged soldiers and Goofus the banjo player singing to weary runners.

Get the Uwharrie Experience

Uwharrie Mountain Run is a masters class in coordinated chaos. Race Director Kim Page calls it “hands-down the most logistically intensive event I’ve ever been a part of.” The three races run simultaneously, their starts staggered an hour apart, with three separate finishes.

When. Race is early February. Online registration opens November 1st at 8 a.m. and all three races fill up within minutes.

The Joys of Small Local Races