I’d never given much thought to running a race in South America, much less an ultra. 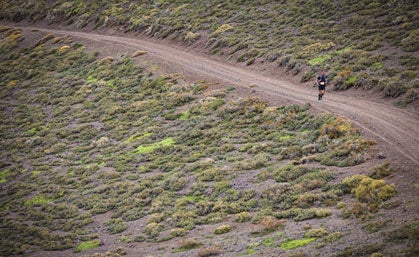 I’d never given much thought to running a race in South America, much less an ultra. But when the opportunity arose to run The Ultramaraton de los Andes—an 80K loop through the foothills of the Andes Mountains just outside of Santiago, Chile— I couldn’t say no.

Santiago, the capital of Chile, is a sprawling metropolis, home to over four million people. Just outside the city, one can catch glimpses of the snow-capped Andes Mountains, which are the longest continual mountain range in the world, stretching some 4300 miles. It’s spring there now, and the high mountains are still covered in snow, flowers are blooming and election signs are everywhere.

Modern, big-windowed skyscraping office towers, trendy shops and restaurants blend with boarded up shops, vacant lots and antiquated buildings. And quaint streets appear just as common as wide-lane highways and stacked overpasses with pedestrians walking dangerously close to high-speed traffic. Nothing about the concrete jungle screams trail running. But a short drive out of town and ribbons of foothills dotted with cattle and horses roll into the big mountains.

Sitting in a van with a group of The North Face runners from Chile, Argentina, Costa Rica and my U.S. teammate Mike Foote of Missoula, Montana, I wished I’d paid better attention to my elementary-school Spanish lessons. Thankfully most everyone in our group spoke English, and we all had trail running in common, and that at least allowed us to communicate in some small way.

It was just after 8 a.m. on Friday, the day before race day, and our group headed out on an easy run along a dirt road that turned to singletrack and meandered through farmland and thick, green foliage—a lot of prickly plants to avoid.

We talked very little. Every now and then something would be said in Spanish or Portuguese … the occasional English, followed by a laugh or smile. And then we’d all resume focus on the ground, no doubt thinking about the race the next day and its 4 a.m. start.

After 25 minutes we returned to the van to eat granola bars, rehydrate and talk shop with course designer Nick Moore (Moore designs all The North Face Endurance Challenge event courses, which meet a rigid set of course and course-marking guidelines).

“Markings will be about every 200 meters,” Moore assured us. I admit that I’m spacey, even more so when I’m racing, so I was glad to hear that I would have no chance of going off course. For my first 50 in a couple of years, this was good news. Foote seemed equally thrilled. “Trail runners seem to always get lost,” he chimed in, no doubt also thinking of his own knack for veering off course.

A three-hour lunch followed, and then a long van ride back to the hotel. I took an afternoon nap then madly started downloading music for my iPod. I laid out my clothes, headlamp, stuffed the pockets of my running vest with gels and filled my hydration bladder.

At 2:15 the next morning, I choked down some millet bread with peanut butter and a cup of coffee before catching the bus to the start line. Unfortunately, when we lined up at the starting arch and were counting down from a minute to start time, I discovered that I’d inadvertently deleted most of my playlists. So, I was stuck listening to three bands on repeat, three bands that all started with the letter “B”: Blonde Redhead, Broken Social Scene and Beach House. My Garmin hadn’t totally charged either. 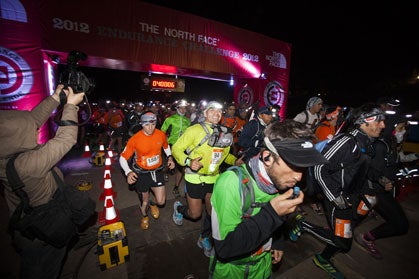 That ended up being OK, though, as I quickly discovered that I didn’t much like listening to music while running in the dark, which entailed the first two hours of the race. I didn’t really listen to much music until after I got back on course after getting lost for a half hour at around the 35K mark, which was when I discovered that I needed to utilize music to get me running hard uphill to catch all the men that had passed me while I was down exploring a steep, rutted-out trail that did not have markings every 200 meters, as it did not have markings at all.

Until that point, I had been having such a good race. I was the first woman, third- or fourth-place overall, and was terrified of losing my spot.

“Oh, well,” I thought. I turned to Max, The North Face athlete liaison from Chile who had followed me down the trail the second time, and wished him good luck, tucked my head and chugged hard for a couple of uphill miles. I was determined to make up some time and pass anyone that might have passed me.

Up until this point, the race had been mostly singletrack and game trails, winding, technical and steep. We passed through countryside dotted with cows and horses and bending trees next to tall cacti. We caught sweeping views of grassy hills and glimpses of the snowy mountains as we zigzagged up and down, up and down.

When I finally reached the 50K aid station, the volunteers cheered me in: “Ashley, Ashley! Go, Ashley. First woman!” Really? I couldn’t believe it. I stopped for a minute to fill up my water, drink some Coke, eat a few peanuts and explain the course-marking situation. “You should send someone down there; it’s really confusing,” I told the volunteers, and took off again.

A doubletrack climbed to the course highpoint at close to 10,000 feet. Grey clouds crowded the sky and a cold wind pushed me sideways. My quads felt like they were on the verge of seizing and I was forced to walk and jog as I tried to shake out my muscles, calm my mind and relax away the pain. Eventually, I felt better and one by one, I passed the four or five runners that had gotten ahead while I was off course. 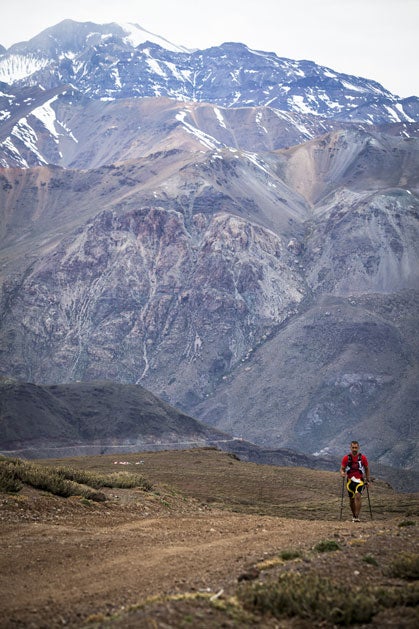 The final runner I passed ended up being the first Chilean runner to cross the line. He looked tired and was pushing hard. We high-fived and I parted with some encouraging words that I don’t think he understood.

The final 11K was a bomber downhill that descended a barren, loose and gravely landscape and became so steep that I ended up sliding on my butt before hopping from side to side, using my hands to navigate every turn. It eventually turned to more runnable, rolling terrain through tundra and cow pastures. I plugged into my iPod and put all my focus on just getting to the line.

Finally after 9 hours 25 minutes, I finished as the first female, fourth overall. Foote had finished first in the men’s race. The finish-line announcer immediately thrust a microphone in my face, asking about my experience. “That was amazing,” I responded, hearing my voice echo all over the finish area. “One of the hardest and most incredible courses that I have ever run.” And then I did a finish-line dance.