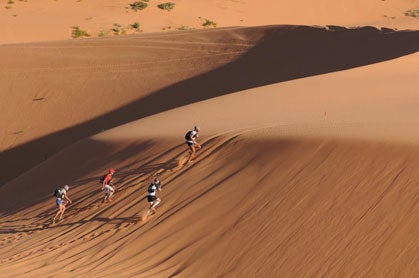 Photo courtesy of the Grand-to-Grand Ultra – The men’s lead pack charges up a sand dune.

Shortly after sunrise Saturday, on a forest road in Southern Utah, flanked by pine and golden aspens, 48 trail runners reached a summit overlooking pink-hued sandstone spires to finish the 167-mile, self-supported Grand-to-Grand Ultra. The inaugural race began with 60 participants the prior Sunday at the North Rim of the Grand Canyon in Arizona.

I was one of those runners who spent the week traversing sun-baked desert plateaus, climbing vermilion cliffs, shuffling through ankle-deep sand and pushing through prickly piñon, cacti and yucca in numerous off-trail stretches of the course, all the while carrying sleeping gear and a week’s worth of food on our backs.

By all accounts, the event—the first of its kind in North America, modeled after international self-supported stage races such as the Marathon des Sables in Morocco—was a success in terms of runner satisfaction and risk management. No significant problems or major injuries arose in spite of the highly technical terrain and remote locations.

The course has a total elevation gain of over 18,000 feet and is broken into six stages with the following mileages: 31.5, 28.5, 47, 25.5, 25.5 and 9. The landscapes consisted of red-rock escarpments, coral-colored sand dunes and a slot canyon sculpted from sandstone. With each stage, the air thinned as the elevation rose from 5200 to 9300 feet.

Also with each stage, excitement built and surprises developed in the women’s race. From the start, two experienced British ultrarunners, Sharon Gayter and Caroline Richards, expected to push each other in a fight for the lead. They proceeded to do just that, frequently passing one another. While Richards dominated at the shorter stages, Gayter gained a significant lead on the long stage (Stage 3, 47 miles).

The women’s duel became more interesting, however, when a couple of stage-race rookies—Heather Mastrianni of Canada and I—finished some of the early stages near the front, along with several additional women nearby. Event co-director Tess Geddes noted afterward that eight of the top 15 finishers were female. “The women were really strong—it was amazing, and it was exciting for us to watch,” she said.

But the big story unfolded in Stage 4 when one woman from mid-pack, Miranda Jamieson, flipped a switch from hiking to running and surged to the front of the women’s field, easily winning Stages 4, 5 and 6 and nearly catching the front men.

Jamieson, a 32-year-old triathlete from Canada who now lives in Florida, explained afterward that she mostly hiked the early stages because of her limited trail and ultrarunning experience. “My whole goal was to finish, period, so my strategy was just to make it through the 47-mile stage,” she said, adding that her longest prior run to this event was only about six hours and without a pack.

Relieved to have the long stage behind her, and wanting to give her swollen heels a break from hiking, Jamieson started running with an energized, forefoot-striking form in Stage 4 and virtually flew over the deep sand and rocky river beds that bogged down the others. Her wins in the final three stages moved her from 27th place overall and 12th female at the end of Stage 3, to 19th overall and 10th female at the finish, leaving many to speculate what her standing might have been if she had shifted to her faster gear earlier in the week.

On the men’s side, a trio of one Spaniard and two Italians—Salvador Calvo Redondo, Stefano Gregoretti and Davide Ugolini—ran together most of the way until Stage 5, when Redondo broke away and developed a 50-minute lead. The trio then crossed the finish together in the final stage. Redondo won with a cumulative time of 34:10, followed by Gregoretti in 35:02 and Ugolini in 36:57. Fourth-place finisher Jo Petersen of New Zealand, with a time of 41:59, made an impressive comeback after he missed a turn on the course during Stage 2 and lost about an hour going in the wrong direction.

Perhaps the most extraordinary participants, however, were the two men who tied for 46th place, KiSuk Song and Kyung Tae Song of South Korea. Kyung Tae, 51, was blinded 30 years ago from a grenade accident during military service. They completed the Grand to Grand by holding onto each other while KiSuk guided every step of the way, finishing in 77 hours 26 minutes.

Runners at the Grand to Grand who have participated in other desert-crossing stage races around the globe gave this event high marks for organization, challenge, scenery and amenities. In particular, they praised the clean Porta Pottis, hot water, medical support and well-constructed eight-person tents at the campgrounds—relative luxuries in the world of multi-day, self-supported races. The town of Kanab, Utah, hosts the event and provided many of the approximately 80 volunteers.

The race attracted 74 registered competitors from 16 countries, 60 of whom actually started. Since the generous cut-off times to checkpoints allowed for hiking most of the way, some chose to hike the entire course, but most alternated running and walking. 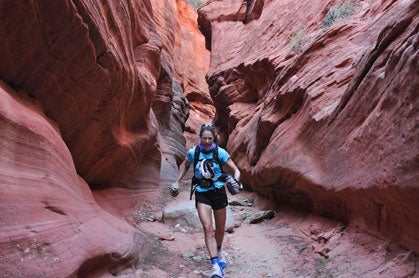 Photo courtesy of the Grand to Grand Ultra – The author runs through a slot canyon.

Event co-director Terry Madl, an ultrarunner who’s completed the Marathon des Sables three times as well as the Badwater Ultramarathon, was largely responsible for the course design. The course skirts the Grand Canyon, Zion and Grand Staircase-Escalante National Monument but does not enter those National Parks due to permitting issues. Instead, it runs through national and state forests, state parks and wide swaths of open space managed by the Bureau of Land Management.

“Every bit of feedback I got is that it’s a high degree of difficulty, along the lines of a Marathon des Sables or possibly even harder, which is kind of what we expected,” Madl said after the race. “We were shooting for something that was pretty challenging, and it was pretty unanimous that folks liked the variety.”

Personally speaking, I more than liked the variety and challenge—I savored it, and I feel tremendously fortunate to have participated in the inaugural year of an event that I predict will grow in size and popularity. It is grand, indeed.

Sarah Lavender Smith is a runner based in the San Francisco Bay Area who blogs about trails and travel at TheRunnersTrip.com. She will write more about the Grand to Grand experience for an upcoming issue of Trail Runner.