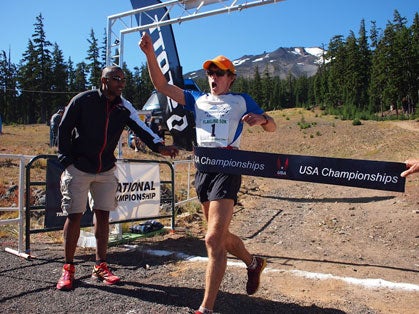 The Pole Creek forest fire in Central Oregon started two weeks before the Flagline 50K on September 22, the 2012 U.S. 50K Trail Championships, giving race director “Super” Dave Thomason heartburn every time the winds changed direction. “Smoke from the fire was making me crazy. When winds were out of the North it felt like you were standing downwind of a campfire” said Thomason.

The fire grew rapidly, and within a few days spanned to 26,000 acres with the edge of the blaze just one ridge line away from the most scenic sections of the racecourse. With smoke encroaching on the nearby town of Sisters, visibility decreased to several hundred feet and residents were advised to stay indoors. According to local runner Mario Mendoza, “I had to run in some pretty nasty smoke most of the days leading up to the Flagline 50K. At times it was so bad that I was sure the race would be canceled.”

South of the fire, air quality on the course varied dramatically, and as race day approached, nobody knew if it would happen. All eyes were on social media updates posted by Dave Thomason.

Five days until the race, Thomason posted on Facebook:

“Smoke, smoke, smoke. Depending on the wind we either have lots or very little.”

The shifting winds meant conditions were fluctuating between apocalyptic and perfect. “I had been up on the course several times the week of the race and air quality was great in the morning but would start to turn ugly after 3 p.m. On the one hand most folks would have finished by 3 p.m. but seeing how fast smoke conditions changed, this kept me from sleeping well,” says Thomason.

Three days until the race:

The 31-mile course is run in the shadow of 10,000-foot volcanic giants Brokentop, Bachelor and the Three Sisters mountains. Starting 6400 feet above sea level at Sunrise Lodge, runners traverse this rolling high-mountain course in a single loop that is snow-free for just a few months each year. The race begins with a smooth, fast, and dusty eight-mile descent before taking runners up the first of two stout 1000-foot climbs. The rest of the course features old growth forests, above-tree-line singletrack, and a creek crossing.

One day until the race, after completing course markings, Tomason posted on Facebook: “Very hopeful for tomorrow. After being up their today and having clean air and sunshine. See you all in the a.m.”

Clear blue skies awaited runners on race day and smoke was undetectable. It wasn’t until one hour before the start, though, that Thomason made the call: Game on.

As the fire burned on distant ridges, favorable winds kept the course smoke free all day. A race director’s nightmare was averted but that didn’t stop Dave Thomason from thinking about what challenges the race could face in future years. “I know we are going to have a snow year at some point so that will be fun to tackle.”