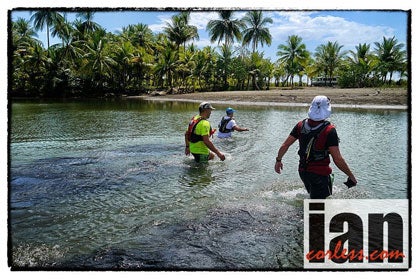 The brainchild of Costa Rican architect and adventure racer Rodrigo Carazo, The Coastal Challenge—in its ninth year—covers 236 kilometers over six days. Starting from Quepos on the coast, the race travels down the coastline of Costa Rica, moving in and out of rainforests and covering a total vertical gain of over 30,000 feet to arrive at the stunning Drake Bay.

Unlike similar stage races like Morocco’s Marathon des Sables, runners do not carry equipment while running other than liquid and essential supplies. The TCC team transfers your baggage each day; a base-camp catering team provides breakfast, lunch and dinner. Nights are spent in campsites along rivers and beaches.

I was fortunate to be invited to not only cover this year’s Coastal Challenge as a photographer/ journalist, but also to run sections of the course myself. My schedule each day involved planting myself at a key advantage point early in the stage, capturing the front runners, then running to the end and obtaining as many images as I could along the way. I would follow athletes, run ahead, photograph, chase, photograph and repeat.

Pre-race chat was focused on defending champion Dave James of the U.S. and Ismael Dris of Spain. James’ strong resume includes records on every stage of the TCC as well as the overall course record, as well as several incredible 100-mile and 100K times. Dris had placed top 10 at the Marathon Des Sables. In the ladies race, Canadian Jen Segger’s last-minute injury and subsequent no-show left a wide-open race for Ligia Madrigal of Costa Rica. 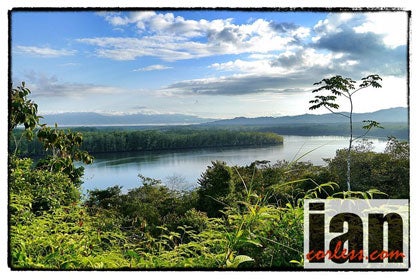 Day 1—33.5 kilometers
Though an easy 10K road section eased runners into the first stage, race director Tim Holmstrom warned runners, “Respect this first day. We see it every year—fresh legs, enthusiasm and a fast flat road … far too many run too hard. This heat and humidity bites you; if it gets hold, it can break you.”

I skipped the initial road section and moved to a technical part immediately after the first checkpoint, running into the rainforest to capture the first competitor’s arrival. After just 15 minutes of running, I was dripping with sweat. But even for a rainforest rookie, I felt in my element … alone, vulnerable and loving every minute of it.

Dave James put the hammer down early; my first glimpse of him was running toward me at around 13 kilometers in, shirtless with a bottle in each hand, running up terrain I’d had to power hike. He looked at one with his environment.

I moved to another section to await other runners. One by one they came by, breathing hard, struggling with the humid conditions. I took off after leading lady, Ligia Madrigal, climbing up through the forest, dense with roots, mud and rocks. The noise of chicarras (cicadas) was deafening, ringing in my head like a multitude of mobile phones.

The climbing gave way to a long descent, then a rope bridge traversing the river. Checkpoint 3 at the end of the bridge was a welcome sight. It was now midday and the heat had intensified.

A final run into the finish at Savegre Valley required runners to navigate boulders, water crossings and a stretch of beach. When runners crossed the finish line, some looked in good shape, but many appeared beat by the heat. Madrigal was one of the latter; having dominated the stage early on, she had succumbed to heat exhaustion and dehydration in the final kilometers, limping over the line in tears.

With rainforest to one side, the river to the other, our camp was in an idyllic setting. My priority after each stage was to upload my images, write a post for the day, then attempt to find a connection to upload to the web—ironic in such a remote and beautiful place.

Day 2—39 kilometers
Breakfast was served at 4 a.m., and the race began again with the sunrise, allowing runners to ease into the heat of the day.

Day two was a shock to those who thought day one was hard. A climb awaited runners as soon as they left base camp—straight up to 660 meters, then dropping down to the first checkpoint at 250 meters before climbing again to 761 meters. Runners battled some dense rainforest before reaching a short section of road and then a final section of beach before the finish line at Dominical. Multiple river crossings provided opportunities to cool off and recover from the day’s heat. 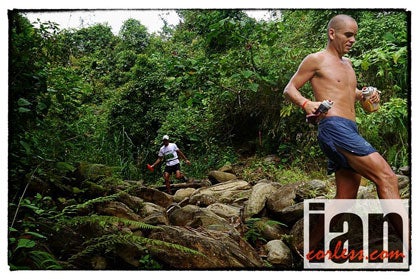 James, with a 46-minute lead on day one, shadowed Dris all day. I captured both of them as they came down through a rocky section of dense rainforest. Henry Monestel and Jose Lopez (both of Costa Rica) pursued the front-runners. First lady on stage two was Tricia Perez (Costa Rica). I ran with her for much of the stage before leapfrogging her to Checkpoint 3 and joining other runners along the beach to Dominical.

Most runners agreed the hardest part of the day was the beach section, with its lack of shade, excruciating heat and energy-sapping sand. The beach bar at Dominical was a very welcome sight … an Imperial beer has never tasted so good.

Day 3—48 kilometers
In my spot near the beautiful Nauyaca waterfall by 6:00 the next morning, accompanied by Howler monkeys, blue butterflies and hummingbirds, I welcomed the sunrise. I never quite knew what might appear in these quiet moments of isolation, but I felt alive.

James was the first to arrive, glancing at the waterfall to his right and then running up the trail hard. Ismael followed 20 minutes behind. Madrigal had dropped from the race, so the women’s race was now down to four. Irene Hale arrived first, followed by Angela Meyer (both of the USA), Perez and Gemma Slaughter (Canada). 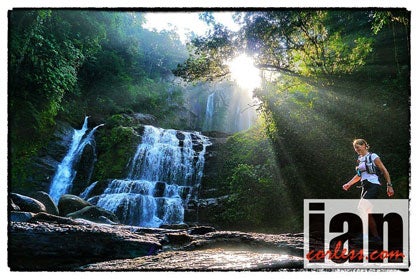 The waterfall on stage 3. Copyright iancorless.com

Rob Harsh of Boulder, Colorado, described the climb to the final summit of the day: “It was long with plenty of bushwhacking. The vines grabbed our feet. The descent was brutal, very steep in sections that shattered your muscles.”

As the runners came down the final climb and started the beach section, the heat and humidity were unbearable. Harsh described it as “hotter than running at Badwater,” and along with other runners, he took a refreshing dip in the water at the end.

A brief section in dense forest followed, full of snakes and spiders, roots and vines that tripped runners. A hot, exposed 4K road section led them into the beautiful beach campsite at Ventanans Beach.

As the sun disappeared over the horizon, we watched humpback whales in the distance.
Day 4—37.5 kilometers

Howler monkeys made their displeasure clear at being awoken at 4 a.m. A short bus transfer was required today to Coronado. Billed as possibly the hardest stage of the race, runners started with a tough scramble up to 998 meters, where the roller coaster course unfolded with lush green pastures, rutted farmland and rolling valleys.

Slaughter said her only goal for the day had been to finish, not necessarily to win. She described her strategy: walk the climbs, run 80 percent of the flats and “shuffle” the downs. “My quads felt like they were being stabbed by knives; it was so painful.” Energized by children who came out along the course to wave and smile at the runners, she pushed hard to the finish at Palmar Sur.

Day 5—47.5 kilometers
It was a remarkable achievement of Carazo and has team to pull off this audacious stage through dense, untouched rainforest. A bus transfer took the participants to the village of Sierpe, where a small boat transferred them across the river.

I took a speedboat down river and retraced in the forest to see the early stages of the race unfold, before running to the finish. Thick clay mud turned to lush forest trail as we ran through mangroves. Lush fields with an occasional farm provided rolling doubletrack. A long stretch of trail finally cleared away to a small village, where I purchased an ice-cold Coke. Wow, I can’t tell you how good that Coke tasted.

Just down the road, a water crossing cleared the way for a couple of road miles and the finish on Drake Beach. James was suffering a little; however, he never relinquished any time and after running all day with Dris, gifted him the stage win. Slaughter, on a high from the previous day, once again dominated the stage for the ladies. Hale and Meyer had decided to stick together, finishing side by side for second and third.

With a campsite that backed on the beach, the atmosphere that evening was one of victory. Tomorrow’s final stage would be a victory lap; the top three in the male and female categories were already decided. Barring some major disaster, James and Slaughter would take the wins.

Day 6—24 kilometers
Every runner welcomed a 7:30 start for the final stage; I, however, was already sitting in a river in the dark at 6:00 to ensure I could capture the early action. The break of first light in the rainforest is a privilege to see. Snakes moved from one bank of the river to the next, birds flew between trees, hummingbirds between flowers. 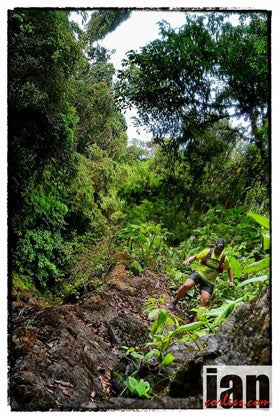 A loud splashing noise in the distance signified that either I was in big trouble from approaching wildlife or that runners were heading my way … the splashing noise increased and then I was surrounded as runners went left and right. James led the way, Dris behind. I jumped in to run the remainder of the stage with Slaughter—running through the river, a rocky waterfall, dense rainforest, more farmlands, another river crossing, in and out of coves on the beach, then finally through trees until the finish line was in sight.

It was a most incredible end to six stunning days. Tam Miller, of Vancouver, Canada, summed it up when she said, “I feel whole and complete and I have no unfinished business.”

The 10th edition of the race will take place at the end of January 2014. For more information, see www.thecoastalchallenge.co.uk

Ian Corless is a creative director and host of an ultrarunning podcast called Talk Ultra, available every two weeks ‘for free’ on iTunes and talkultra.com. In addition to this, Ian is a photographer, writer, reviewer and blogger at iancorless.com. Ian is currently travelling the world capturing stories from some of the most iconic ultras on the planet.