The somber reality of the Barkley Marathons in the moments before the race begins. Photo by Howie Stern

The cruel brainchild of its race director, Gary “Lazarus Lake (aka Laz)” Cantrell, the Barkley Marathons takes place each spring in the punishing mountains of Frozen Head State Park, Tennessee. Now garnering even mainstream notoriety for its near impossibility, the once-obscure 100-mile event, fondly referred to as The Race That Eats Its Young, began in 1986 and, in the ensuing 32 years, has seen a grand total of … drum roll, please … 18 finishes!

With 66,000 feet of climbing, the 20-mile, five-loop event dishes out double the pain and suffering as the renowned Hardrock 100 in Colorado’s San Juan Mountains. The cutoff time for each loop is 12 hours—yes, just 20 miles in 12 hours. But what sets Barkley apart aside from its brutality are its quirks.

Featuring a $1.60 entry fee, the race kicks off (between midnight and noon on the closest Saturday to April Fools’ Day) when Laz fires up a smoke at the famous yellow gate in the campground basecamp, and 40 runners cast off in search of their first “book.” Laz places nine to 11 paperback books strategically throughout the course, and racers must find the books in sequence and rip out the pages corresponding to their race-bib numbers.

And aspirants are not traipsing along a well-marked, flagged course on flowy singletrack. Rather, the route cross- countries up and down the steep, sawbriar-infested hillsides, and racers must navigate by their own reckoning and good ol’ map and compass. If a racer taps out—highly likely—he or she is treated to a live bugle rendition of “Taps.”

Herewith, we feature the photographer Howie Stern’s graphic images that capture the Art of Suffering required to endure Barkley. Says Stern, “The biggest challenge to shooting Barkley is understanding the race and how to capture it in a way that brings forth its difficulty, both physically and mentally. Having run the race myself really helps to bring those elements together to tell the story.” 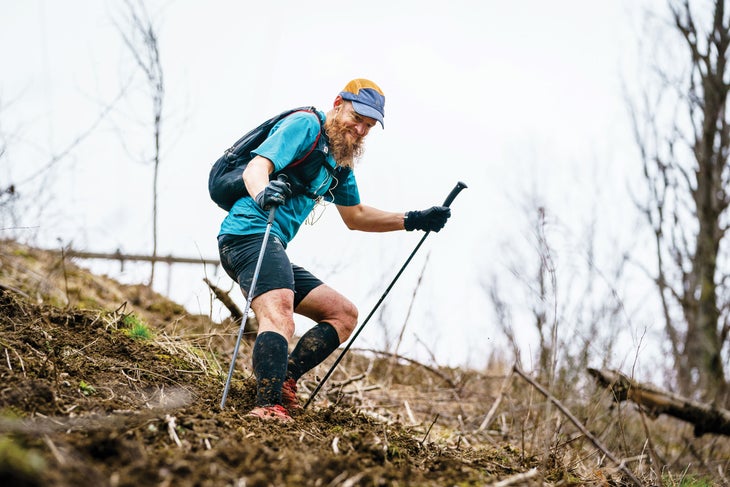 Gary Robbins gritting out the brutally steep and muddy terrain of the Testicle Spectacle. 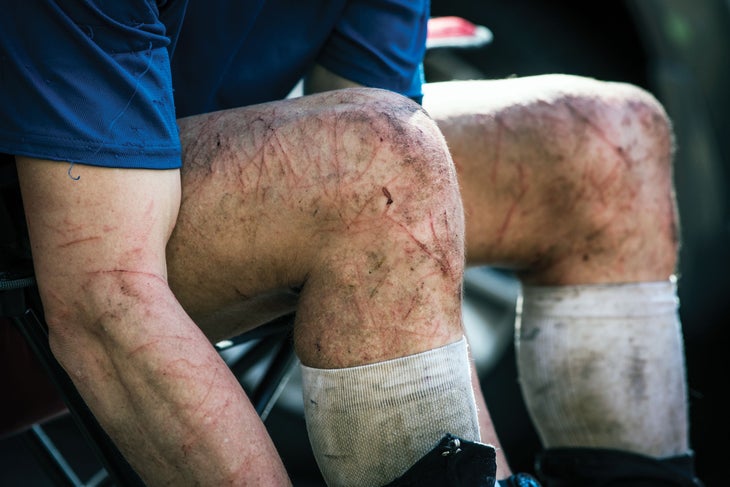 The infamous briars leave behind their tell-tale signature on John Kelly’s limbs.

What’s the first thing you think of when you think of Barkley? Its impossibility. I also think of the mood of the woods—it feels gray and cold. I love it.

Is Barkley important in the running world? Yes, it gives you something to strive for where no one is holding your hand. The Barkley puts you out there in the elements and sees what you are made of.

Best moment? Nailing the navigation on Loop 1 this year. I helped find the new book 5 with the lead pack of runners and was spot on. That gives me a lot of confidence going into future editions should I be fortunate enough to return.

Worst moment? Getting lost in the fog and dark near Indian Knob and then having to take shelter from the rain because I was losing body temperature.

Life lessons from running Barkley? Learning to take each year as a step forward while also legitimately enjoying the hunger that failure brings. 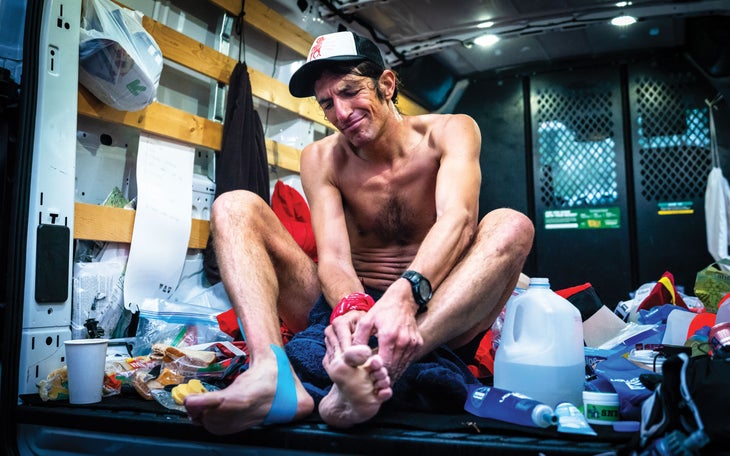 Jamil Coury tending to the damage from a Barkley loop. 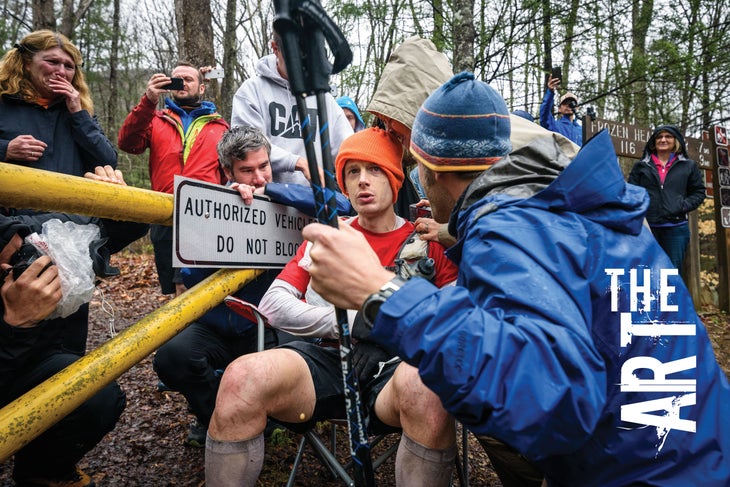 John Kelly successfully went where few before him have gone, the full five-loop Barkley experience. 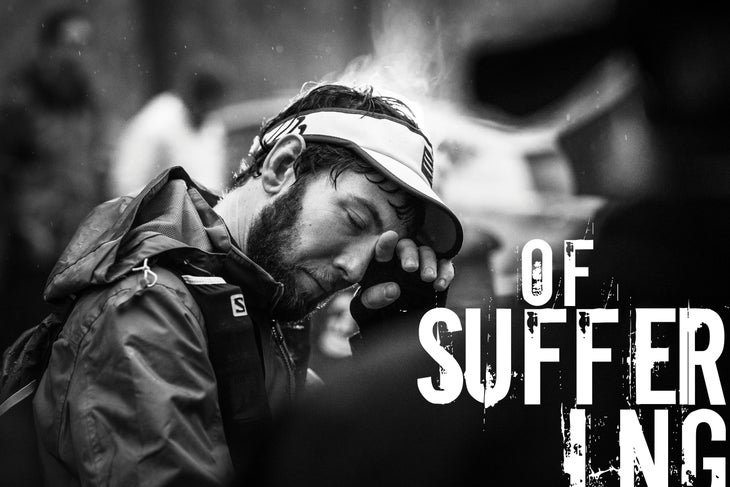 The emotional pain and disappointment of high expectations and a failed attempt to complete even one loop sinks in. 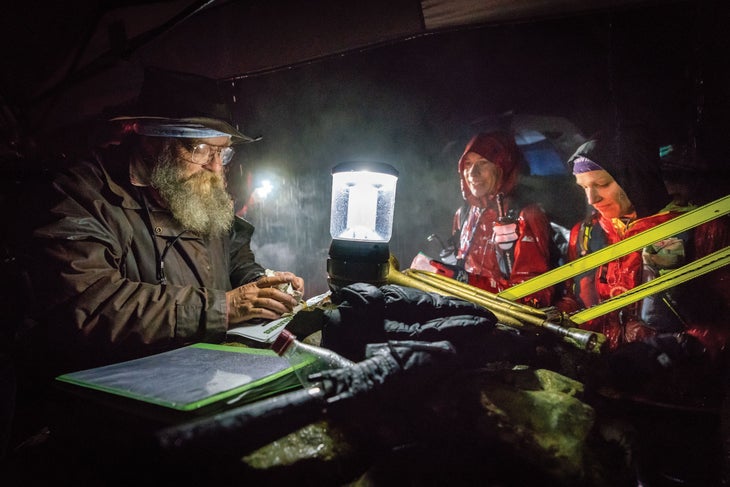 Maggie Guterl and Eoin Keith keep the faith after spending a long day and part of the night in the rain, as Laz verifies they in fact found all of the books on the course.

What’s the first thing you think of when you think of Barkley? The yellow gate—seeing it during the race is either a symbol of victory or a sign of defeat. I can’t run by gates (of any color) without thinking of that gate now.

Is Barkley important in the running world? Absolutely. It gets a lot of hate from purists who say it’s not a “real” race, but it’s just a different type of race that requires a different type of athlete. You need to be both physically and mentally on top of your game at every moment, for up to 60 hours.

Best moment? Ripping that page out of the last book completing the first loop—there’s such a sense of accomplishment in navigating on your own when, at points, you are hopelessly lost.

Worst moment? Falling in the prison water [the race notoriously follows a stream underneath an old prison] and losing the veteran [a racer who has previously run Barkley] who had been helping me navigate the first loop, and realizing I had to find the last three books on my own. But, oddly enough, that led to the best moment!

Life lessons from running Barkley? Failure is how you define it. Paper says I failed. I think I won. 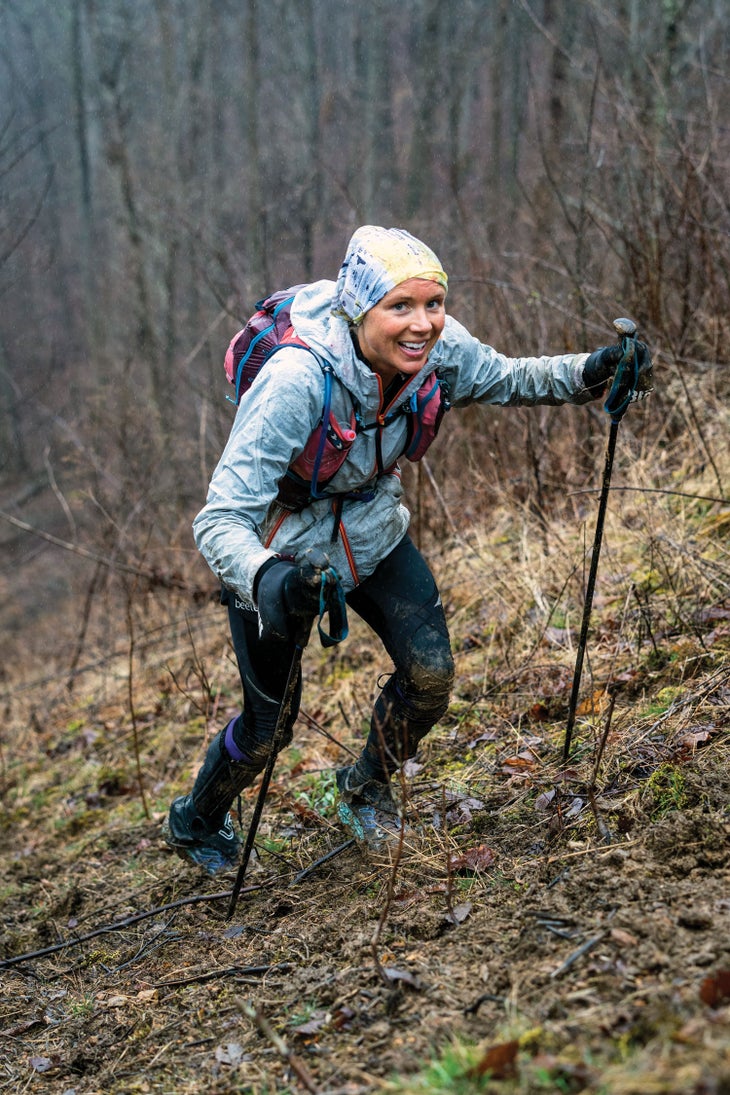 Amelia Boone managing to momentarily stay upright as she works up the slip-and-slide slope of the Testicle Spectacle.