Race aims to bring together the best of U.S. and European racing 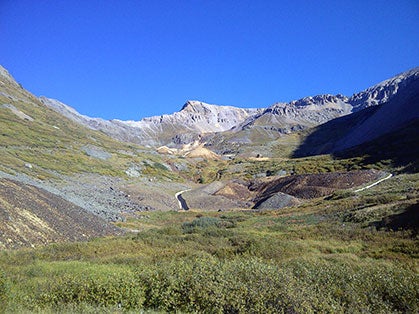 This summer, mountain runners will flock to Telluride, Colorado, to duke it out on the trails that climb steeply out of the iconic, box-canyon town and into the surrounding San Juan Mountains. A collaborative, multi-generational effort, the first-ever Telluride Mountain Run (TMR) will take place on August 10, 2013.

Dakota Jones, 22, of Durango, Colorado and Reese Ruland, 25, of Denver, Colorado, were on a road trip together last Thanksgiving when, says Ruland, they were bored and “did what any normal couple does when boredom strikes—we formulated a business plan, drafted up LLC terms and built what we think of as an amazing alpine race”—the TMR, or T-Rad, as it’s become affectionately known.

Jones conceived the idea of directing his own race while running (and winning) last year’s Transvulcania 83K in the Canary Islands. He dreamed of putting on a mold-breaking race that would combine aspects of America’s laid back, low-fanfare approach to trail races and Europe’s hyper-competitive, mountain-racing tradition.

Says Jones, “For me, the reason to start a race is to do something  new that progresses the sport.” To that end he has had little interest in keeping the course to the standard distances—26.2 miles, 50K, 100K—that define so many races. He hopes to invoke some of Europe’s competitive spirit and enthusiasm for trail-race spectatorship, while keeping a humble approach that respects the environment, and honors everyone who runs the race, not just the elites.

He and Ruland designed a rugged, 55-mile course traversing several national forests in the San Juans. They launched a website to promote the race and secured corporate sponsorships. Entry will be first-come, first-serve, save three lucky winners of the T-Rad Art, Photo and Essay Contests—light-hearted contests that, along with regular race newsletters, have helped stir up enthusiasm. The contests offer a six pack of beer to second- and third-place winners and award first-place winners free entry into the race, as well as a promise to “send your mother a congratulatory letter for having such an interesting and creative child.”

While excitement for the race built in the greater trail-running community, Jones and Ruland had one problem: the Forest Service had little interest in approving permits for the race as they’d designed it.

In the meantime, longtime Telluride local and five-time Hardrock 100 finisher Ricky Denesik, 54, finally acted on his idea of putting on a trail run circumnavigating the Telluride Valley. Fellow locals were interested, but no one wanted to get involved in securing permits. So Denesik took the reins and began chatting with the local Forest Service.

They were open to the race, albeit with restrictions. The course needed to be entirely contained in the Uncompahgre National Forest, and could only follow numbered forest-service trails. The number of participants would be capped at 75. Denesik, who knows the local trail system like the back of his hand, modified his original course proposal until he landed upon something “palatable” to the Forest Service.

About this time, he got a call from Jones, suggesting they join forces.

“I’m a behind-the-scenes kind of guy,” says Denesik. “Reese and Dakota are young and already had [the publicity] all lined up.”

The race is now 38 miles long and passes over 10 passes at 12,000 feet, taking in landmarks such as Gold Hill, Bear Creek, Bridalveil Basin and many mining relics. Runners will battle relentless high country, but unlike in more remote races like Hardrock, will never be more than seven miles from town. The organizers are optimistic that T-Rad can expand for next year—a longer course and more participants—once they earn the trust of the Forest Service.

To allow more participation this year, Denesik secured permission for 150 runners to race an accompanying Vertical Hill Climb on the same day. Starting in town and following the brutally steep first four miles of the long course, the

Hill Climb will be eight miles total, straight up and down, with 4000 feet of vertical gain. Says Ruland, “I think this event might steal the show and really put people in the pain cave.”

WATCH: “Rural Runners” Is A Hopeful Film About Campaign Trails and Mountain Trails