An extraordinary footrace around the world’s eighth-highest mountain 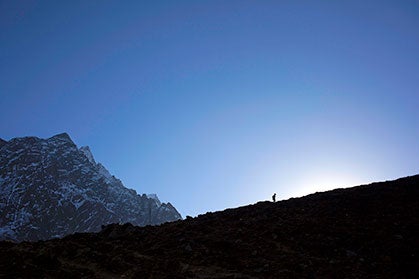 Lizzy Hawker in the trail up to Larkya La, the high pass preceding the final stage. Photo by Richard Bull.

Our race began on the banks of the Budi Gandaki river in Nepal. The inaugural 132-mile Manaslu Mountain Trail stage race—a partial circumnavigation of the 26,000-foot peak of Manaslu—would take 40 runners on a seven-stage (nine-day) jatra, or tough journey, deep into remote regions in the Himalayas.

It was warm at our starting altitude of around 2000 feet. Villages peppered our rocky route along the steep-sided river gorge, where rice paddies were gradually replaced by fields of millet, barley and maize. In the pine forests of the higher valleys, descending trains of pack mules sometimes slowed us runners. Laughing children greeted us in the villages.

Because everything in the high valleys of Nepal is carried in by foot, luxuries disappeared as we went deeper into the mountains. Washing was limited to the cold water of the village tap and electricity was scarce. “Doing without” gave us appreciation for the small things: a soothing mug of hot lemon tea at  a checkpoint, a warm stove on a cold night, a fluttering prayer flag to lift our spirits.

After a relatively gentle first day of racing (16 miles, 900 feet elevation gain), village children showed us the way to a natural hot springs in which to soak our tired feet. The next day, we broke away from the main trail to visit Serang Gompa, a secluded Buddhist monastery at 10,500 feet. Home to 80 monks and nuns, it is tucked away from the outside world, surrounded by icy walls stretching up to 23,000-foot summits.

That night, we shared dinner around a fire under the stars. The squat toilets, relentless bugs and lack of contact with home pushed many runners out of their comfort zones—and the accumulating exhaustion was as much mental as it was physical. Said Chris Ord of Australia, “The Himalayan mountains are my latest love—one that lured me in, then smashed my spirit into oblivion, to the point where a simple step forward seemed impossible.”

We woke up for a blessing from the Rinpoche before heading back out through a forested hillside and descending through isolated villages to the lower valley. We emerged around 10,000 feet, where the narrow forested gorge gave way to wide-open terraces from which mountains rose to lofty heights. 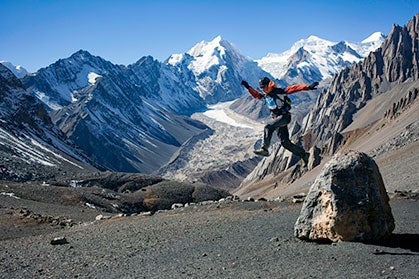 Race winner Upendra Sunuwar on the border between Nepal and Tibet. Photo by Richard Bull.

When we reached the village of Samagaon, Manaslu towered over us. Its distinctive twin peaks caught the morning sunlight beautifully, carving an “M” in the sky, with walls of snow and ice falling steeply away to the terraces below. Its Nepali name means “Mountain of the Spirit;” in Tibetan, Manaslu is known as Pungyen, which literally means “ornamented heap.” As the Lama from Samagaon tells in the book Tibet Diary, “In one sense the mountain is just a heap of earth, rocks and cliffs. But to us it is an ornamented heap of riches.”

On from Samagaon, the race made a side trip to Manaslu Base Camp. With glacial ice towers on one side of the trail, pine forest on the other, it was another hard uphill pull. Descending back into the valley, we reached Samdo, a Tibetan refugee village, and paid a visit to the tiny, half- century-old monastery.

Here, runners took a rest day. For some it meant a short walk up to Dharamsala—“pilgrim’s resthouse”—where we would camp and prepare for an early start up the Larkya La, our high point at 16,847 feet. For others it meant a leisurely walk up to the border point of the Rui La at 16,400 feet to peer into the wilds of Tibet, a stark landscape of glaciated summits rising under a deep blue sky.

The crossing at Larkya La was a non-racing stage to avoid overexertion at altitude, but posed an enormous challenge. The triumph of reaching the prayer flags at the top was accompanied with a beautiful view along the backbone of the Himalayas, an icy skyline of high summits falling steeply to a green valley floor below. We still had nearly 10,000 feet to descend (including 21 kilometers of racing from the last village below the glacial moraine) as we curled around the west face of Manaslu and into the village of Tilije for the finish line. For many, it was the hardest day yet.

In our day-to-day life at home, a week can pass quickly. On the trail, things feel different. In the five days it had taken us to reach Samagaon, the cold, altitude and illness had taken their toll. However, sharing the challenges of the trail helped forge strong friendships. Says participant Zeanna Haroun,of Singapore, “It doesn’t happen very often in today’s world, where we are all very individual, with different lives and paths, that we come together as a group with the same goal, the same destination.”

Richard Bull, the race director, lives in Kathmandu and is the founding editor of trailrunningnepal.org. Lizzy Hawker is five-time winner of The North Face Ultra-Trail du Mont-Blanc and holds the world record for 24 hours (road). (lizzyhawker.com) 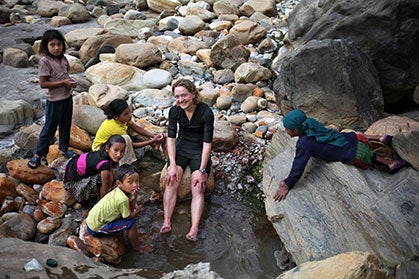 > What to Carry A small running pack to tote warm layers (for after you finish), some food and drink. The rest of your supplies will be carried by porters.

> Food Meals are provided. For the evening meal, traditional food such as dal bhat (the Nepali national dish of rice, lentils and vegetables) is served, as well as pasta, soups, potatoes, bread, fruits and, occasionally, meat or even apple pie. It is also possible to buy snacks in villages.

> What to Wear It is recommended you dress modestly, e.g. cover your shoulders, no tiny shorts. Warm clothes and a good sleeping bag are necessary for higher altitudes.

> Pre / Post Race Kathmandu has seven world heritage sites, well worth exploring. If you want to extend your trip, accommodations to suit all budgets are available.