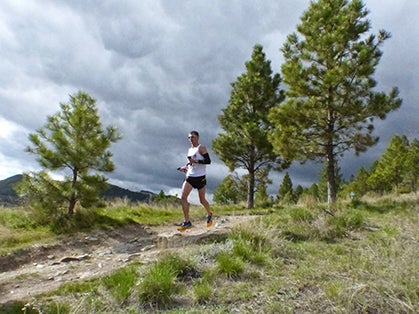 Eventual winner Jim Walmsley in the last mile of the Don’t Fence Me In Trail Run in Helena, Montana. Photo by Tad Davis.

Helena, Montana was the trail-running hot spot on May 10, hosting the Don’t Fence Me In Trail Run (DFMITR), race six of 10 in the 2014 La Sportiva Mountain Cup. Though this 30K race begins and ends in downtown Helena, most of the course is on the local trail system which explores the mountains and pine forests outside the city.

The top four male finishers were separated by just a few minutes and stayed close in the first several miles. Jared Scott, 31, of Dolores, Colorado, an old hand at the DFMITR who finished first in 2011 and second in 2012, placed fourth this year with a time of 2:17:27. Scott says that the competition has gotten harder in recent years as the La Sportiva Mountain Cup and DFMITR have gained popularity. “Right off the bat they send you up Mount Ascension,” says Scott. “Usually I hammer up [that mountain], but this year I wanted to see what would happen if I sat back on the first climb.”

One man who did press the pace was Jim Walmsley, 24, of Black Eagle, Montana, who ran hard from the beginning and eventually won the race in 2:11:34. “[Jim] led that ascent and then never looked back,” says Scott.

Justin Ricks, 34, of Colorado Springs, Colorado, finished third with a time of 2:15:03, catching and passing Scott on the ridge of Mount Helena close to the end of the race. “I knew there wasn’t much uphill left and I knew I would definitely get him on the downhill. The downhill is my strength,” says Ricks, who started the race in seventh and worked his way through the field passing competitors on the descents. “I felt really bad in the first half. I tried to do a crash taper before the race which might have made me feel a little flat.” 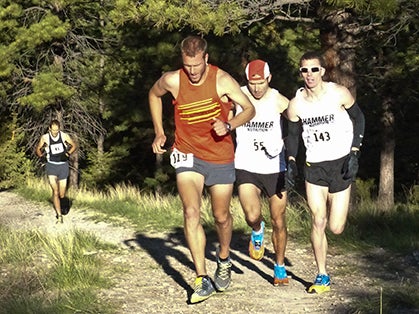 Ricks ran three minutes faster this year than last (where he placed second) and says he is happy with his performance. Like Scott, he was surprised and pleased by the competitiveness this year. Justin Houck, 28, of Mercer Island, Washington, took second in 2:12:58.

The women’s race was equally thrilling. Megan Kimmel, 34, of Silverton, Colorado, defending champion of the past three DFMITRs, was a favorite heading into the event, but faded to fifth place during the race and finished over 21 minutes behind this year’s winner, Megan Deakins, 23, of Mountain View, California, who won with a time of 2:30:48. “Looking back, I had no race in me,” says Kimmel who only recently returned from a trip to Nepal and is transitioning to a new job.

Maria Dalzot, 26, of Bellingham, Washington, secured second place in 2:38:14, edging out third-place finisher, Paige Pattillo, 25, of Ellensburg, Washington, by over 11 minutes. “This race was another big learning experience for me. Navigating the trails alone and pushing yourself when no one is around is not easy to do for 2.5+ hours. I managed to keep the voices in my head positive and my focus never wandered,” Dalzot writes in her race recap. “The trails up there are amazing,” says Kimmel. “[The race] is seamless, and it’s great to have ladies out there getting excited about the Mountain Cup.”

Ryan Woods, 32, of Boone, North Carolina, currently leads the La Sportiva Mountain Cup standings for men, followed by Ricks. Racers are scored based on their finishing position in their best five races. Kimmel retains first place for the women, followed by Dalzot.

Updated Mountain Cup standings can be found at www.mountaincup.com/2014-results. The next race in the series is the Rothrock Challenge next month in State College, Pennsylvania!