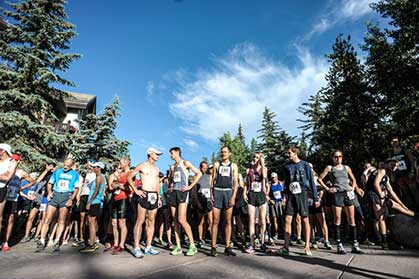 Runners gather in Vail Village at the start of the annual Vail HillClimb. Photo by Hannah King.

With over 2,500 feet of vertical gain over a seven-mile course, the brutal Vail HillClimb in Vail, Colorado, is a favorite of uphill gluttons, meandering out of Vail Village before rocketing straight to the summit of Vail Mountain (11,570 feet).

This year’s race, which took place on July 5, was dominated by “locals.” Coloradoans swept the podium on the men’s side and grabbed first and third place on the women’s. Matthew Kempton, 29, of Denver, who won with a time of 52:12, crossed the line only 80 seconds ahead of second-place finisher, Callen DeLine, 18, of Avon. Steve Mantell, 22, of Fort Collins, secured third place just 27 seconds behind DeLine with a time of 53:39. The top 10 male finishers completed the course just over four minutes apart, with Vail native Eric Hermann, 52, snagging 10th in 56:17. 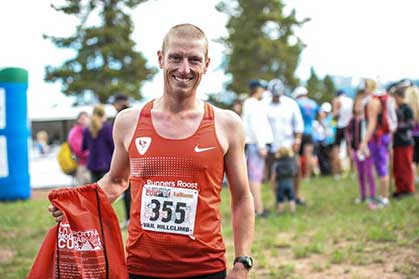 Matt Kempton grinning after his win at the 2014 Vail HillClimb. Photo by Hannah King.

“One person who has really impressed me this year is Matt Kempton,” says Race Director, Steve Croucher. “He goes at it with a nonchalant attitude.” Kempton has won the first three of the races in the Vail Rec District’s seven-race series, and Croucher says he does not expect to see the victories stop there.

“I knew that the steep parts got [even] steeper near the top, so I wanted to be sure that I had the gas to keep going,” says Nuzam. “I’m definitely a stronger uphill runner than downhill so I tried to start out conservatively and pass people along the way.”

Kjorstad too focused on running her own race. “Going into the Vail HillClimb, I was not overly optimistic. I had just moved to Jackson, Wyoming a week prior,” she says. “In retrospect, I definitely raced too conservatively, but damnit I made it to the starting line!” 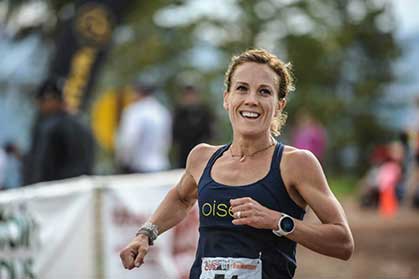 Sarah Kjorstad is all smiles as she reaches the summit of Vail Mountain in second place. Photo by Hannah King.

The HillClimb course is comprised mostly of a dirt doubletrack service road which, Croucher says, gets to the heart of trail-running heritage. The route is reminiscent of a time when backcountry fire roads were the only way to traverse mountains. “You’re climbing an S-turn and you look down and see a hundred other runners behind you. That’s what makes this race special,” says Croucher. This communal atmosphere carries on beyond the finish line as competitors applaud each other, high-five and drink up the view from the top of the mountain.

“We had 404 finishers, and I think that’s a heck of a number, especially since it’s the day after the Fourth,” says Croucher, who thought partygoers might wake up post-holiday in no shape to race.

But the event’s not about speed to every participant. B.J. Smith, 71, of Eagle, Colorado, has competed in the Vail HillClimb at least 35 times, though even she is uncertain of the exact number. “You’ve got to give someone like that credit,” says Croucher who watched Smith scale Vail Mountain on Saturday with a smile on her face. 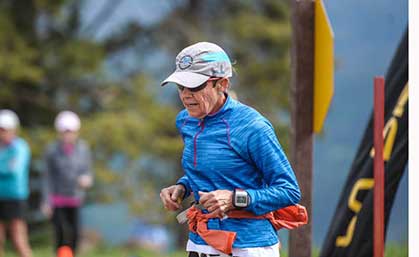 71-year-old B.J. Smith covering the the last section of the course. Photo by Hannah King.

Smith and her husband began running back when Adidas made the only running shoe on the market. “Running gear didn’t exist,” she says. “We wore cotton T-shirts. We would run in the mountains and, if it rained, we’d be soaked and frozen. Nobody else ran in the woods back then.”

With time the sport evolved, but Smith still runs for the same reason—for the thrill of an off-road jaunt. “I don’t understand people who run past my house every day,” says Smith. “The fun part is when you trip and fall and hit your elbows on roots.”

Ryan Woods is the current male leader in the La Sportiva Mountain Cup, gapping Justin Ricks 80 points to 74. Megan Kimmel leads over Sarah Kjorstad for the women, 76 points to 65. The next race in the series, the Table Rock 25K, will take place in Stinson Beach, California, on July 19. Current standings for the La Sportiva Mountain Cup can be found at www.mountaincup.com/2014-results.