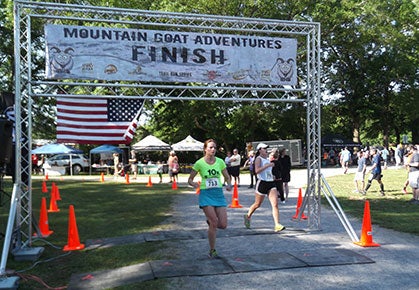 The finish of the Sutallee Trace Challenge, the sixth race of the La Sportiva Mountain Cup. Courtesy Everett Russell/La Sportiva

The morning of the Sutallee Trace Challenge, in Canton, Georgia, opened with blue skies and a slight breeze, giving La Sportiva Mountain Cup racers a break from the rainy weather out West—the last Mountain Cup race was Montana’s Don’t Fence Me In, earlier this month.

At 8:30 a.m., Sutallee racers took off down three quarters of a mile of gravel double track. Racers took off fast, and the front of the pack opened up a gap on the main field before moving into the tighter singletrack that made up the rest of the 10-mile course. The first few miles were well maintained, existing trails, but as racers ran deeper into the woods the trails became less and less worn in. Some navigation challenges ensued, slowing the front of the pack slightly, but all racers managed to stay on the well-marked course—even though the trail was more of a suggestion than a clear-cut path at points. 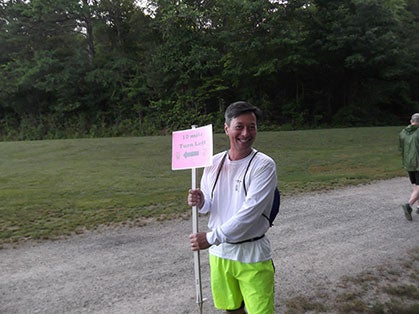 A race volunteer near the start of the Sutallee Trace Challenge. Despite faint trails in sections, well-executed course markings meant no one got majorly lost. Courtesy of Everett Russell/La Sportiva

Emerging from the newer section of trail, La Sportiva athlete Ryan Woods had opened up a lead over fellow La Sportiva teammates Brett Ferrier and Jason Bryant, and maintained his edge until the finish line, which he reached in a speedy 1:08:33. Ferrier wasn’t far behind, coming in at 1:10:17. Bryant finished third, in 1:14:46.  On the women’s front, it was Tara Mooney versus Erin Sutton, who both opened up a large gap over the rest of the field. By the final stretch, Mooney led by 50 seconds, and carried this over the finish line, in 1:23:33. Sutton’s 1:24:25 was good for second place, with Camilla Ferreira Wenceslau coming in third, in 1:31:50.

The men’s Mountain Cup continues to heat up as Woods opened up a larger gap over Matt Kempton, but with three races and the championship remaining things are still too close to call! Meanwhile, Maria Dalzot holds a 19-point lead over Sara Kjorstad in the women’s race. (Dalzot, a registered dietitian, writes Trail Runner‘s online Ask the Dietitian column.) 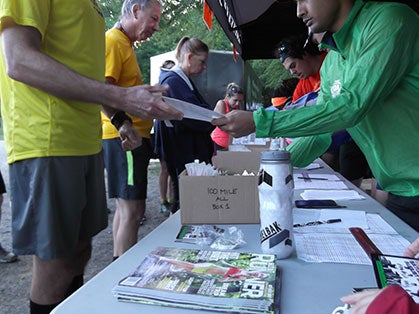 Medals and buckles are nice, but we all know the real prize is that issue of Trail Runner on the table! Courtesy Everett Russell/La Sportiva