Broken ribs and fractured toes couldn’t keep these two speedy, stubborn runners away from one of Pennsylvania’s gnarliest races 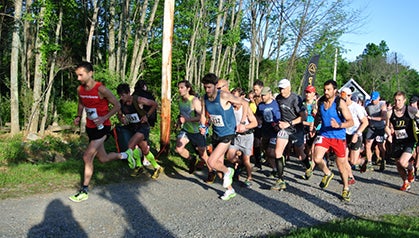 A few weeks ago, David Roche, 25, of Washington, DC, was racing Montana’s Don’t Fence Me In trail run when he suddenly collided with a large rock, resulting in a few broken ribs and a (possibly) cracked sternum. Undeterred, he kept running and still finished in time to see his fiancée Megan Deakins cruise in for the women’s win and a new course record.

Meanwhile, Meira Minard, 40 of State College, Pennsylvania, has been battling foot injuries for the past year that, as a self-proclaimed “trail-loving idiot,” she’s tried to run through. After the pain got unbearable last March, she got an X-ray and MRI, which showed a fractured sesamoid and ruptured flexor tendon in her toe. She took five weeks off from running in hopes of it healing on its own.

Despite their injuries, both runners were determined not to miss last weekend’s Rothrock Trail Challenge 30K in State College, Pennsylvania, the 7th race in this year’s La Sportiva Mountain Cup. Minard has run the race every year since 2010, including two wins and a third-place finish last year. According to her, Rothrock’s race directors, Craig and Jen Fleming, were adamantly opposed to her running the race this year but, says she, “I managed to find some other poor volunteer to take my registration form about 15 minutes before the race.”

Roche, meanwhile, trained right through his injuries from Don’t Fence Me In —”like any compulsive runner would,” he says—occasionally displacing a rib or two on training runs, but evidently nothing serious enough to deter him from entering Rothrock.

While many trail races get described as particularly “technical, “grueling” or “gnarly,” few are as deserving of those adjectives as Rothrock, which, in the words of Minard, “contains just about every type of terrain imaginable, except for straight and flat.”

After a 1,000-foot (in one mile) “warm up” to Spruce Gap, runners avalanche their way down a steep, loose boulder field—the first of many. “There were boulder fields at a 40-percent grade, ropes anchored into the rocks on some steep pitches, and a constantly changing terrain that went from valley bogs to ridge cliffs to ridge cliffs and back, four times,” says Roche. “I probably twisted my ankle 30 times, and it was impossible not to love every second.” 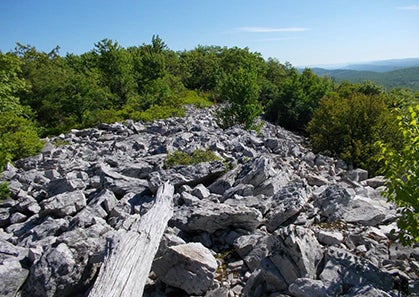 From the Rothrock course: there’s a trail in there somewhere. Photo by James Clapper, courtesy of David Roche.

Roche adds that when researching the race beforehand, he came across one race report from a runner, notably a Barkley Marathons finisher, who described Rothrock as the most intense course he had ever done.

Both Roche and Minard took commanding early leads in the respective men’s and women’s races. One volunteer at the 12-mile aid station described Roche tearing down the hill “flying like a bat out of hell”—so fast, in fact, that he briefly missed the double flag marking where to cross a log bridge to reach the aid station—but not so fast that he didn’t stop to chat with and thank the volunteers at that aid station.

His brief detour didn’t stop him either from smashing the course record by roughly seven minutes, finishing in 2:32:49—and beating his nearest competitor this year, Jason Bryant, 41, of Elkin, North Carolina, by over 17 minutes. Minard, meanwhile, continued to lead the women’s race, running with a group of fast men including her trail buddy, Lance Babb, with whom she says she “took turns falling—so that was nice!”

“I was just hoping to finish without rupturing or fracturing anything else,” says Meinard. “I came away with an ankle sprain and a skinned palm, which is a major success in my book!”

Roche feels similarly satisfied, more thrilled by his survival and (relatively) intact body than by his speed: “[My fiancée] Megan wrote me a loving message from California the night before the race and finished it with something along the lines of, ‘David, I don’t care if you win or lose. Just don’t fall of a cliff and die.’ So my main goal was to live up to her advice.” 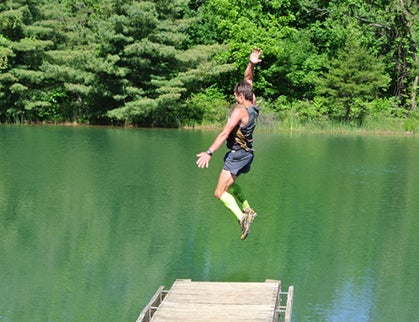 The next La Sportiva Mountain Cup race takes place on July 5 at the La Sportiva Vail Hill Climb in Vail, Colorado. Ryan Woods and Megan Kimmel maintain their overall leads in the Mountain Cup, with 80 and 76 series points respectively.