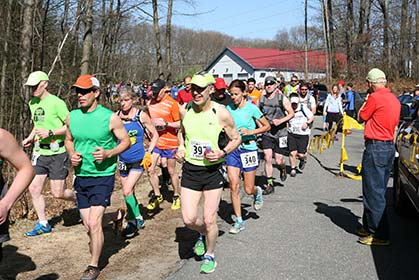 More than 400 runners gritted it out for 12 miles to cross the finish line of the 7 Sisters Trail Race in Amherst, Massachusetts, two weekends ago. The six-mile out-and-back course follows the New England National Scenic Trail over hilly singletrack with nearly 2,000 feet of climbing and descent. Runners are rarely on flat ground; they ascend 600 feet in the first mile and continue on steeply graded terrain until the 1,000-foot descent to the turnaround point. Runners then about-face and climb straight back up the 1,000 feet they just descended to kick off the return trip. 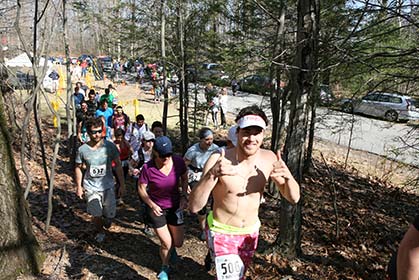 A smile and a thumbs up to kick of the race. Photo courtesy of La Sportiva

The race, now in its 25th year, donates all proceeds to Friends of Mt. Holyoke Range, an organization that buys up land for conservation. This is the second year that 7 Sisters has been a part of the La Sportiva Mountain Cup.

Ryan Woods still holds the overall cup lead. This weekend’s first-place finisher, Hummel, is in fourth place for the men’s cup, while the women’s winner, Davis, is in fifth place on the women’s side.