6 Qs for Maria Dalzot, who set a new course record at last weekend’s Hillbilly Half Marathon 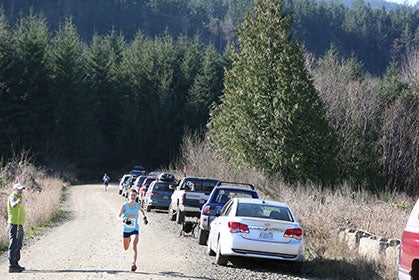 Maria Dalzot cruising to her first-place finish at the Hillbilly Half Marathon in Olympia, Washington, last Saturday. Photo courtesy of La Sportiva

The 2015 La Sportiva Mountain Cup kicked off on Saturday with the Hillbilly Half Marathon, a grueling race through the wooded trails of Capitol Forest State Park in Olympia, Washington. Some 250 runners lined up by the large stump that marks the start line, ready to tackle the course’s strenuous climbs, rocky descents and muddy, rooty trails.

Despite rugged terrain and balmy, mid-60s temperatures, the Hillbilly Half saw some speedy finishes. Maria Dalzot, 26, of Bellingham, Washington, blazed through the race in 1:37:00, beating Megan Kimmel’s 2013 course record—and second-place finisher Ladia Albertson-Junkans, 29, of Minneapolis—by about half a minute.

On the men’s side, Ryan Woods, 35, of Boone, North Carolina, finished in 1:23:21, just 20 seconds ahead of second-place Matthew Kempton, 31, of Denver. Brett Ferrier, 32, of Ogden, Utah, and Trisha Steidl, 38, of Seattle, rounded out the podium on the men’s and women’s sides, respectively.

Dalzot, a member of the La Sportiva Mountain Running Team and registered dietitian who writes Trail Runner’s Ask the Dietitian column, began running competitively with her middle-school cross-country team, before transitioning to trail and mountain races in 2007.

“I have always been a solid climber so I thought that mountain running would play to my strengths,” she says, and she wasn’t wrong: after qualifying for the Junior U.S. Mountain Running Team as a college sophomore, she placed eighth overall at the 2007 World Mountain Running Championships in Switzerland. “I have been hooked ever since,” she continues.

Trail Runner caught up with Dalzot after the Hillbilly Half to chat about the race and nutrition and training strategies. 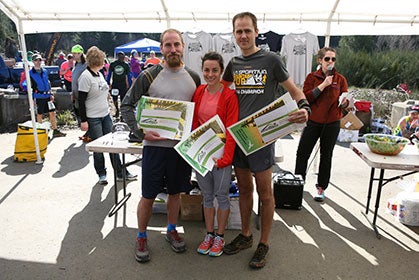 1. What was your strategy going into the Hillbilly Half? Were you gunning for the course record?

Coming off a great season opener [a first-place finish at the Fragrance Lake Half Marathon] two weeks prior to the Hillbilly Half, I had some knee pain that forced me to take a day off and adjust my training. Still, I felt confident enough in my fitness level that I had a good shot at Megan Kimmel’s course record. Megan is one of my trail role models, so going after her course record was a big deal. I wrote the necessary splits on my arm for reference.

Soon into the race, I realized the splits would be out the window and I’d be racing, when Ladia Albertson-Junkans followed me up the first hill with ease. By three miles, she had me by about 15 seconds. There was a huge pile of logs that blocked the path, and even though the flags went to the right, I saw Ladia head to the left. It wasn’t until the turnaround that I knew for sure she had gone the wrong way, and was now about one and a half minutes behind me. From that point, I ran scared as she cut the distance between us, but I was able to hold her off for the win.

2. What training advice would you give to runners training for hard mountain races like the Hillbilly Half?

Train on the type of terrain that you expect to race on in terms of elevation gain/loss and trail technicality. In terms of racing, one of the most important skills to practice is the ability to switch gears from downhill to uphill, uphill to flat, etc.

3. As a registered dietitian, you must think a lot about your nutrition strategy. What do you eat before, during and after a mountain half-marathon?

I think about food 24/7! Before the half-marathon, I ate Expedition Espresso Trail Butter and a banana wrapped in a tortilla with two cups of coffee. For a fast race that is around 90 minutes, I typically do not have to eat anything while I am running, but I always carry a GU with me just in case I feel like my blood sugar is dropping.

After a hard race effort, to ensure I recover as quickly as possible, I try to eat a high-quality protein source like eggs or sushi. I also make sure that I eat plenty of fruits and vegetables, given that my immune system is down.

4. Do you have a guilty-pleasure snack? Or are you able to resist post-run indulgences?

Two or three times a year, after a hard or important race, I love to unwind with really rich ice cream or gelato. I’m talking dark-chocolate ice cream with peanut-butter swirls and a chocolate-dipped waffle cone. I don’t like fruit in my dessert!

5. What’s next for you this season?

Next up, I will be running my marathon debut at the Orcas Island Marathon on April 11.

6. How do you plan on adjusting your training for the longer distance?

The only adjustment I am making is adding a weekly 20-mile long run. Proper nutrition becomes even more important during longer runs, so I have been practicing my fueling and hydrating.

You can read more of Trail Runner’s coverage of the La Sportiva Mountain Cup here.