The La Sportiva Mountain Cup heads to Texas for the second race of the series, the Hell’s Hills 25K 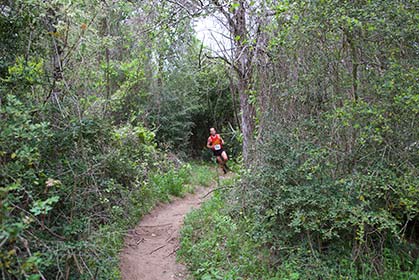 On Saturday, the La Sportiva Mountain Cup circuit made its second stop of 2015: the Hell’s Hills 25K in Smithville, Texas. The race takes place on the winding mountain-bike singletrack of the Rocky Hill Ranch. The loop course boasts little elevation gain, but rocks and tight corners make for technical running. Heat and humidity are typically the real challenges of the course.

The day before the race saw sunny skies and temperatures in the 80s. However, race day dawned overcast and breezy, making conditions unusually bearable. After watching the 50-mile and 50K racers start in the pitch black, 25K racers toed the starting line at 7:00 a.m., heading off into the pre-dawn for a single loop around the heavily wooded course. The race was fast-paced, and racers flung themselves around the course’s twists and turns. Winner Ryan Woods said, “Early in the race I was leaned over hard in the corners, hugging the berms to keep my speed up.”

The men’s race was a tight finish, with only 18 seconds separating first and second place. Defending 2014 Mountain Cup champion Ryan Woods, 36, of North Carolina, ran 1:36:20 for a first-place finish, missing his own course record (1:35:22) by 58 seconds. Thirty-year-old Coloradan Matthew Kempton scooted into second place just behind Woods with a time of 1:36:48. Skyler Cummins, 23, of California placed third with 1:37:26. The top four male competitors finished just over ten minutes apart, with 31-year old Logan Martin of Colorado coming in with a time of 1:46:30.

The women’s race was a Texan-dominated affair. Linda Wagers, 56, of Texas, topped the podium with a time of 2:26:09. Katie Forrest, 28, also from Texas, snagged second at 2:26:33. Another Southerner, Floridian Sheri Poskanzer, ran the course in 2:28:15, just over two minutes behind Wagers, for a third-place finish.

The La Sportiva Mountain Cup next heads to North Carolina’s Catawba River next, for the Tuck Fest Half Marathon on April 18.