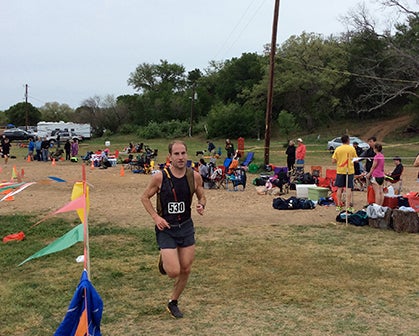 Last weekend at the Hells Hills 25K, the fourth race in the La Sportiva Mountain Cup Series, the heat was turned on full blast—but only by the runners themselves. Runners raced along the singletrack course, winding through wildflower fields and pine forests, and generally avoiding the heat. For the duration of the 25K run, uncommonly low temperatures for this time of year hovered in the mid-60s with a light breeze, allowing for a new course record on the women’s side.

2012’s first-place winner, Ryan Woods, 35, of Boone, North Carolina, came within 30 seconds of his previous course record, finishing in 1:36:16. The race stayed consistently fast, with this year’s field speeding through even what race director Joe Prusaitis calls the hardest part of the course. Second place went to Callum Neff, 29, of Katy, Texas, just 17 seconds behind Woods. Justin Ricks, 34, of Colorado Springs, Colorado, took third with a time of 1:40:10. Notably, 17-year-old local Ford Smith completed the course in an impressive 1:49:19, closing the gap on the elite runners.

Ryan Woods’ win bumps him up into first place overall in the La Sportiva Mountain Cup standings, with Justin Ricks close behind in second. Kristi Anderson‘s second-place finish moves her into the lead on the women’s side, with Megan Kimmel in second. The next Mountain Cup race will be May 4, 2013—the 7 Sisters Trail Race in Amherst, Massachusetts.

For complete results from the Hells Hills 25K, see: