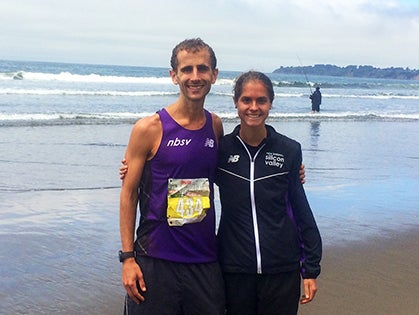 The ninth race in the La Sportiva Mountain Cup Series, the Table Rock 27K, took place on July 19 at Stinson Beach, California, just north of foggy San Francisco. Although this coastal race started at sea level, runners tackled nearly 2,000 feet of elevation gain in the opening 2.3 miles, and several more thousand feet of elevation gain and loss over the rest of the undulating course.

A stiff ocean breeze didn’t keep David Roche, 26, of Sunnyvale, California, from dashing through the mist to nab first place with a course record time of 1:53:42, six minutes ahead of second-place finisher, Justin Houck, 28, of Mercer Island, Washington (1:59:21).

“I knew I had a good shot at winning when I was about two meters away from the finish line,” says Roche. “Justin Houck [is] a great runner coming off a 3:11 trail 50K and 24:27 road 8K. I felt really good and tried to get away from him with a strong first climb and a few 4:35 miles on the downhill, [but] I was running scared the whole time and didn’t turn around to check my shoulder until I was in the finishing chute.”

It was ultimately a simple plan that won Roche the race. “I decided to do my usual strategy, which is to go all-out from the starting gun and hope for the best,” he says. 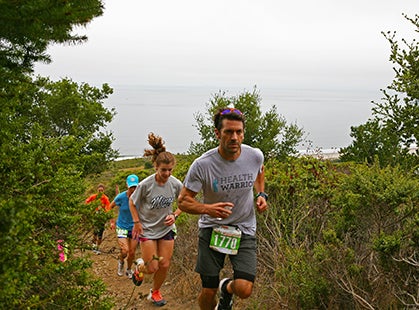 Runners on course, with foggy Stinson Beach behind them. Photo courtesy of Everett Russell / La Sportiva.

“I prefer trail courses that reward running ability and enable me to hit some faster splits,” says Deakins who guessed she was on course-record pace when she checked her split after the first climb.

Even though she attacked the opening miles and was hurting only 30 minutes into the race, Deakins managed to rally. “One of the best parts about trail racing is the ability to come back strong after red-lining on a particular hill or effort,” says Deakins. “Feeling a little bit rough at the four-mile mark in a long race on trails is not the end of the day. That’s the best part about trails—on the track, that would be a different story.” Deakins averaged 5:40 pace for three consecutive miles of technical single track following the initial climb of the race.

“Megan and I love courses with steep uphills and gradual downhills,” says Roche. “On the climbs, everyone suffers a bit and time gaps form, and on the downs we can use our shorter-distance speed to keep moving ahead.” Both Roche and Deakins will travel to Italy in September as members of the US Mountain Running Team. The trip will double as a honeymoon.

A student at the Stanford School of Medicine, Deakins must keep her training flexible to accommodate her studies. She couples hard weekday morning runs with easier afternoon sessions. She schedules long runs, hill repeats and races for the weekends, and always takes one complete rest day each week. “For [the Table Rock], I did some easier miles on Thursday and Friday and also significantly increased my ice cream intake to be ready to go at the start,” she says.

The winning pair got engaged on trails near the Table Rock course in August of 2013 (Roche proposing with a cherry Ring Pop after a 12-mile run), so it is only fitting that they came away with a set of victories. “I love getting to share the whole racing experience with David because I know that we have the same philosophy on racing and running,” says Deakins. “He appreciates the surrounding trail beauty, and oddly enough, just like myself, the feeling of screaming legs.”

The next (and final!) La Sportiva Mountain Cup race takes place on August 2 at the Jupiter Peak Steeplechase in Park City, Utah.