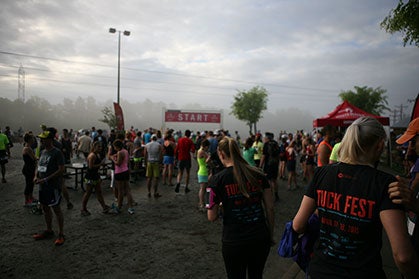 Racers mill about in the pre-race muck. Photo by Quinn Carrasco/La Sportiva

Mud, inch worms and relative humidity higher than any of my test scores in college: those three things were out on the course this weekend along with hundreds of runners and spectators at the Tuck Fest Half Marathon.

After several days of heavy rains, the competitors in Charlotte, North Carolina, toed the starting line in the parking lot of the US National Whitewater Center. Fog hung low over the race course as runners secured their bibs neatly with safety pins. To throw in a twist, the race director announced that he had hidden sticks with La Sportiva stickers on them throughout the race course, and anyone who found one and brought it back would win a free pair of La Sportiva mountain-running shoes. As if running a muddy half-marathon in the woods wasn’t enough incentive to get out of bed that morning! 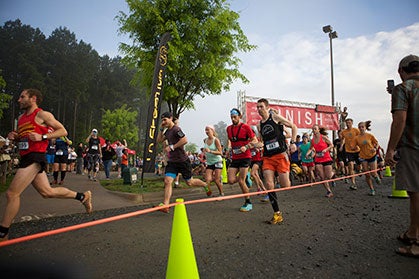 And they’re off! Photo by Quinn Carrasco/La Sportiva

The gun went off and racers hurled themselves down the course. La Sportiva athlete Ryan Woods had a strong lead from the start as he led the pack of runners eager to challenge themselves on the windy trails of the USNWC. With over 20 miles of trails cutting through the lush forest, the runners enjoyed breathtaking views of the Catawba River, opulent foliage plump and green from the recent rain, tall oak trees and scampering critters.

Mud was everywhere; as runners came through the halfway point, you could see the telltale signs of carnage on the switchbacks. Dirt caked the legs of runners up to their waists as they hurled themselves back into the forest for a second lap. Some runners even stopped, citing the extreme conditions to be too much for them to handle as they walked back to clean themselves up before heading off to enjoy the rest of the weekend. For most, the mud was an enjoyable twist that made them realize that they couldn’t rely on their road-running shoes to get them safely from start to finish. 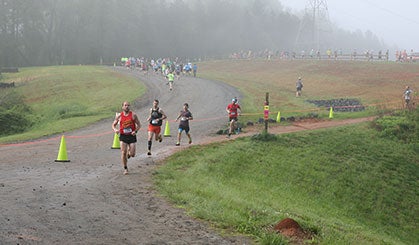 As the quarter-marathoners started trickling into the finisher’s area, everyone watched with bated breath, looking for the first half-marathoners to pop out of the woods. The first runner out was none other than La Sportiva athlete Ryan Woods, the current Mountain Cup leader. Several minutes later, Matt Haley came flying out of the woods. Third-place Devin Darrell was just a few minutes behind. Check the results at MountainCup.com to see the rest of the top finishers and the updated results.

Other than hosting a beautiful trail race, Tuck Fest was a weekend full of activities that included mountain biking, kayaking, deep water soloing, SUP racing, live music, Carolina BBQ and so much more. Although this may not have been the most technical course on the Mountain Cup tour, the US National Whitewater Center put on a great festival. The final numbers aren’t in, but I wouldn’t be surprised if some 10,000 people attended the festival over the weekend, despite the looming storms. If you’re in the area next year, make sure to stop by and say hi to us at the La Sportiva tent in the Vendor Village. 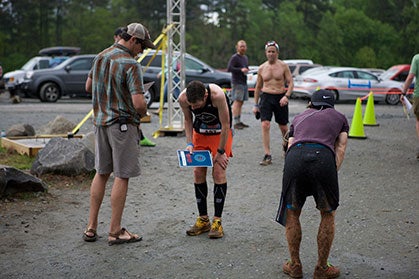