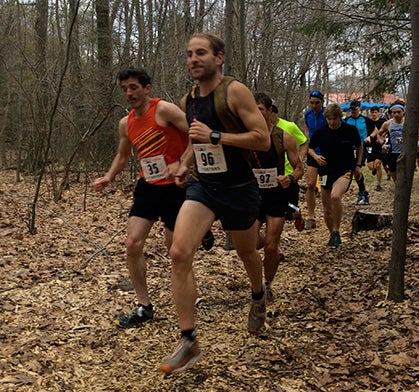 Twenty-three years ago, roughly 100 runners showed up to race the inaugural 7 Sisters Trail Race, a 12-mile out-and-back course in Amherst, Massachusetts. Owing at least in part to the beauty of that particular stretch of singletrack along the New England National Scenic Trail, the race has since grown to over 500 participants.

Due to 7 Sisters’ growth in recent years, runners began this year’s race in waves, with the elites leading the charge. Woods took an early lead and, at the half-way turnaround, realized that he had opened over a three-minute gap on the next racer. He controlled his pace on the return leg, maintaining his lead but ensuring he didn’t blow up in the final technical miles of steep descending.

Woods crossed the line in first in a time of 1:54:03, followed shortly afterward by Bryant, who excelled on the technical and steep singletrack. Woods said the course was one of the “toughest 12 miles I’ve ever run. It hit us early and didn’t let up!”

On the women’s front, the familiar face of Megan Kimmel, 33, of Silverton, Colorado, toed the line and cruised to an easy victory for the women, coming in well ahead of her competitors. Second place went to Kelsey Allen, 30, of Sterling, Massachusetts.

With this most recent race in the books, Woods managed to extend his Mountain Cup lead over Justin Ricks and Megan Kimmel once again returned to the top of the women’s board. The next stop on the series takes place this weekend in Helena, Montana, giving some western racers a chance to up their points total.