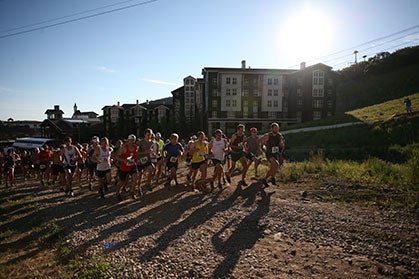 And they’re off! Photo by Quinn Carrasco/La Sportiva

Park City, nestled in the heart of the Wasatch Mountains, has more than 400 miles of singletrack that wind their way through three ski resorts and an additional 8,000 acres of preserved open space. It’s a fitting home for the Jupiter Peak Steeplechase, the La Sportiva Mountain Cup Finals for the last six years.

The morning of the race, the air was cool and competitors began to trickle through the registration booth as they picked up their race bibs and timing chips. Runners were already warming up on the hill at the start line to get their body ready for the first eight miles, which gain over 3,000 feet. As the lines at the bathrooms expanded and contracted, more and more people gathered at the start to calibrate their watches and mentally prepare.

A minute or two before 8 a.m., Charlie Sturgis, co-race director with Linda Karz, got on the loudspeaker to welcome everyone to the event and thank the sponsors for the money, time and donations. After a short speech, the clock struck 8 and the horn blared: The racers were off!

The race follows a steep gully, straight up the ski slope. Wide-open slopes quickly turn into single track, so racers were forced to jockey for position early or risk getting stuck in line amongst the trees. Around mile 6, competitors turn a corner and the race’s namesake peak appears in the distance. Hands and feet were required by most to climb the side of the peak; the grade gets as steep as 50 percent in places. Half a mile to the top and racers were greeted at the Skullcandy aid station by bumping music and food and drinks. King and Queen of the Mountain (first male and female to the top of Jupiter Peak) win $100 cash and a neat bluetooth speaker. This year, Matt Kempton was King and Marta Larsen Queen. 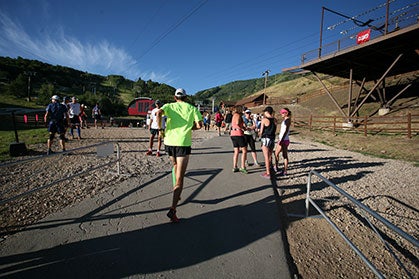 Warming up before the lung-busting start. Photo by Quinn Carrasco/La Sportiva

The next seven miles are all downhill. Beautiful singletrack winds its way down from the high alpine, through tall trees and across ski slopes. With tired legs and lungs struggling to extract oxygen from the air, racers plunged back toward the base of the mountain. The well-maintained trails of Park City are great for going fast and the runners used this to their advantage as they opened their stride and watched the miles drift by.

Waiting at the finish line, we scarfed down breakfast at the acclaimed Silver Star Cafe before the first runners came through. Shortly after hearing that the leader had just left the last aid station, we could see a figure making his way down the final stretch. The winner of the 2015 Jupiter Peak Steeplechase was Tayte Pullman with a time of 1:50:49. Shortly behind him, with a time of 1:52:25, was Matthew Kempton with Noah Brautigam in tow.

At 2:22:31, Sarah Kjorstad came running through the finish line to take first place in the female category. Up next was Marta Larsen, Queen of the Mountain, with a time of 2:26:23. Finally, Anna Rudolphi took third place with a time of 2:30:41. 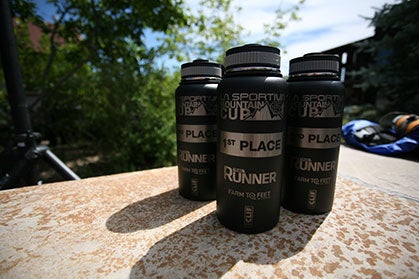 The key to any race: finisher’s swag! Photo by Quinn Carrasco/La Sportiva

The Jupiter Peak Steeplechase finish-line area is on a Cul De Sac right next to the Silver Star Cafe. Finishers get a free beer and many people stick around for the huge raffle held after the awards are handed out. A hose to shower off and a table covered in delicious recovery snacks made it easy to cheer on the rest of the runners as they came in after the elites.

As Jupiter Peak was the final race in the 2015 La Sportiva Mountain Cup, the overall series awards ceremony took place right after the race’s trophies were handed out. The final results are posted on MountainCup.Com.

Thanks again to our sponsors Trail Runner magazine, Clif Bar and Farm to Feet! The La Sportiva Mountain Cup is happy to partner with these great companies.