… be sure to wear your fast shoes. Last weekend’s TNF 50 Championship just outside of San Francisco is the latest manifestation of a newer—and faster—ultra scene 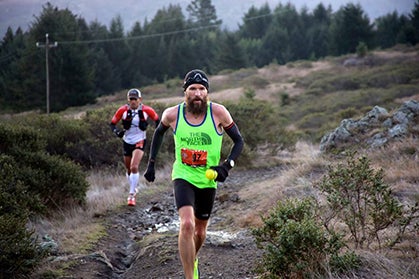 Never mind that Chris Vargo, of Colorado Springs, grew up swimming and was a serious cyclist who only recently turned to running. With a 1:08 half-marathon PR, he’s surely one of the fastest, most talented runners on the starting line of any given 50-miler. Right?

And there’s Oakland’s Magdalena Boulet, the 2008 Olympian with a 2:26 marathon to her name. Never mind that, before last weekend, she’d never run an ultra. With the right training, she’d just about be a lock to win whatever race she chooses as her debut, especially if that race is in her backyard, on trails she runs regularly.

At The North Face (TNF) Endurance Challenge 50 Mile Championship in Marin County (just north of San Francisco) last weekend, however, Vargo and Boulet were just two of a couple-dozen runners who might conceivably win on any given day. Soon after the inaugural race in 2007, the event began to take the shape of a de facto end-of-the-year championship race. Each year, it has grown increasingly into that role, talent-packed with runners with wide-ranging skill sets vying for $10,000 top prize.

“The course is runnable and fast but mountainous enough to draw in that crowd too,” says Dakota Jones, of Boulder, who finished second at the race in 2011 and ran it for the fourth time Saturday. “It has aspects that make it acceptable to runners from all different backgrounds.”

Boulet, for one, recognized that her road-running background was both an asset and a liability on the course, which mixes several flat, runnable sections with several thousand feet of vertical gain and loss. “I was very grateful to see some of the flat sections,” she says. “Going into this race I believed the elevation gain was playing to my strengths because I love running uphill, but my weaknesses are the downhills, which I haven’t learned how to run aggressively.”

She would utilize those climbs and flat sections to finish second among women in 7:31:12, 10 minutes behind Littleton, Colorado’s Michele Yates, who has won trail races at every distance from 10K to 100 miles. Vargo was third overall, in 6:33:33, behind Flagstaff, Arizona’s Rob Krar and former University of Colorado runner Cameron Clayton. 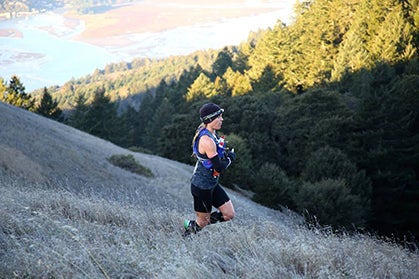 Michele Yates on her way to winning the women’s race. Photo by Galen Burrell

“I’ve been trying to run the most competitive races, because that’s the only way you’re going to get faster,” says Vargo, who improved 14 places from his 2012 finish. “If you tackle these races where the next guy is an hour behind you, then what’s the point? You can’t possibly push yourself hard unless you have people around you pushing you harder.”

TNF San Francisco embodies the infusion of fast, road-and-track-type talent into ultrarunning. Besides Boulet, Krar was a middle-distance specialist in college who subsequently dominated at shorter trail events before recently making the foray into ultras, while Boulder’s Sage Canaday, who was widely expected to compete for the win but withdrew due to illness, is a 2:16 marathoner who has won a slew of 50K to 100K races this year. And they have to contend with seasoned mountain runners like Jones (who was also felled by the flu—he finished an admirable 98th in 9:40:14), 2011 winner Mike Wolfe, of Missoula, Montana, and two-time winner Miguel Heras of Spain. It has made the event an exciting one to predict, follow and dissect.

Jones says that the prize money and the beauty of the course have “a snowballing effect and a positive feedback loop that helps the race grow and makes it exciting each year.”

Boulet says she expects participation in ultras (and trail races in general) to continue to increase in both quantity and quality as the sport grows more visible and race organization reflects increased demand—each trend, perhaps, fueling the other.

“I think [trail running] is becoming a lot more attractive because people are putting more resources into races, and bringing more prize money,” she says. “People realize it doesn’t matter whether you race on the roads or the track, because a lot of us spend a lot of time on the trail no matter what we’re training for. You’ve been putting in all this time and the transition is pretty easy.”

The strength of TNF’s race organization, according to Jones, is capitalizing on that diverse passion to create a world-class event.

That the race is held in bustling, sunny San Francisco at a time of year when much of the U.S. is falling below freezing certainly helps draw competitors as well.

“I think it’s the perfect place for a race this time of year,” says Brett Rivers, owner of San Francisco Running Company, a new running specialty store that sits just off the TNF course in Mill Valley. “Plus it’s a major metro area, and yet you have all this preserved space, which is pretty incredible.”

“It makes San Francisco, in our minds, one of the best trail-running towns in America,” he continues, noting that the city’s robust economy and proximity to major outdoor recreation opportunities has helped draw a slew of talented runners—people like Dylan Bowman, who placed fifth at the race Saturday, and Rickey Gates, who was 26th—to the Bay Area.

Actually, Gates just followed his girlfriend out here, he explained to me the Tuesday after the race as he led me on a meandering run through San Francisco’s hilly streets and hidden strings of singletrack. “That’s about the only reason for a trail runner to live in a city,” he said. “But if I had to pick a city, this is a pretty good one.”

Trail running is a tradition in the area, says Rivers, laying claim to the nation’s oldest trail race, the Dipsea. “But,” he explains, “having exposure to a race like TNF has gotten a lot more people in the community into trail running.”

“It’s great to be a part of this community,” adds Jorge Maravilla, San Francisco Running Company’s General Manager, who finished seventh Saturday. “We have one of the best trail systems in the country. It’s great that the TNF race has evolved to become so big, that we get to host all these runners from all over who want to challenge themselves on our hills.”