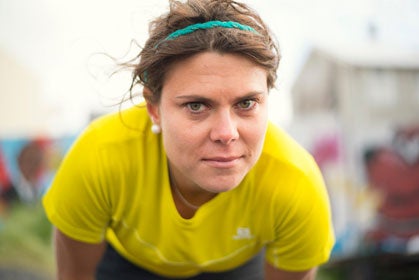 Lucrezi on an easy run in Reykjavik, Iceland, the day before winning the Laugavegur Ultra. Photo by David Clifford.

Awakening to bright daylight in my room at the IcelandAir Hotel Marina in downtown Reykjavik, I panicked—had I missed my bus ride to the start of the Laugavegur Ultra Marathon? However, a quick glance at the clock calmed me down. It was still only 3 a.m. Iceland’s northern latitude means the summer sun doesn’t ever dip far below the horizon, and the night sky is never fully dark.

A rugged 55-kilometer race through the southern highlands of Iceland held each July since 1997, the Laugavegur Ultra crosses everything from sand to snow to icy rivers. During our bus ride from Reykjavik through stunning lime-green-moss-covered mountains, the race director Svava Asgeirsdottir briefed us about weather conditions on the course—a wintery mix of snow, sleet, rain and strong winds would dash my hopes of soaking up vitamin D from bluebird skies. After our four-hour bus ride, we arrived in Landmannalaugar, and 300 runners moseyed to the starting line. 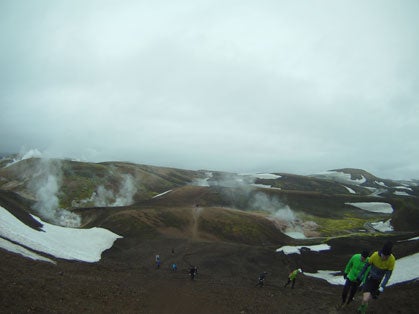 We started up steep, technical singletrack. After a few kilometers, the trail widened, but felt treacherous, covered with sharp basalt rocks. To stay warm amid heavy snow and sleet, I pushed hard up the next climb but worried I would trigger a flare-up of my recently injured hamstring.

After the climb six to eight kilometers of undulating snowfields lay ahead. I hoped for Styrofoam-style snow but instead faced a slushy mess. I told myself, “It’s OK—it is just part of the Icelandic experience.” Plus, I knew a downhill was coming up.

At the race’s highpoint at Mt. Hrafntinnusker (3600 feet, about 1600 feet higher than the race’s starting point), I sat in first place in the women’s race, and snapped a mental picture of the rolling mountains covered in bright-green vegetation and high waterfalls dropping into roaring rivers. My gawking stopped when the rain picked up and chilled me back into reality.

I hoped to bomb the upcoming descents, but was thwarted by steep loose gravel and sand. I tried to let my body relax and allow gravity to do its job, but I knew there was no hope for “happy” quads tomorrow. Also, focusing on foot placement was crucial to avoid a scalding bath in the steaming trailside hot springs.

A long stretch of flat and slightly rolling, sandy terrain allowed me to open up my stride and relax. Until this point, I’d felt plagued by uncertainties: would my body hold up? Would my hamstring act up? How far back was the second-place female? I cranked up some Robin Thicke on my iPod and let my “road training” go to work. 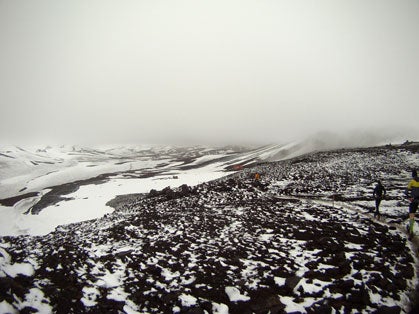 With about five kilometers to go, a frigid, rope-aided river crossing provided soothing relief to my achy legs. Finally, I rounded the last corner, elated to see the finish line, where I was greeted by friendly cheers, a warm blanket and a hug from Svava.

The race’s weather was the worst in its 17-year history. Many runners suffered hypothermia and were pulled from the course. In such tough conditions, I was grateful to have won, and even achieved the third fastest women’s time ever.

The beautiful scenery and terrain combined with the amazing embrace of the Icelandic people and a well-managed race make the Laugavegur Ultra well worth the trip. I plan to return in 2014.

When not managing ad sales for Trail Runner magazine, Gina is most likely frolicking in the wilderness in search of amazing vistas or trying to perfect the batter-to-blueberry ratio in her gluten-free blueberry muffins.