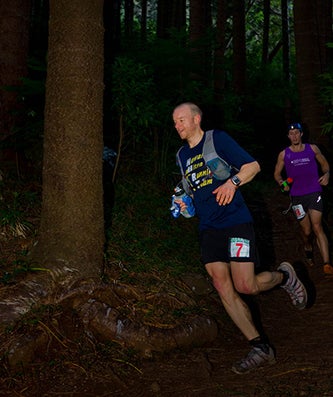 Gary Robbins out on the HURT course
Photos by Justin Lottig

Hawaii’s HURT 100-Mile Endurance Run never fails to live up to its name. The race winds along narrow forest tracks, exposed ridges, over roots, rocks and mud pits, and skirts intimidating vertical embankments. There are 20 stream crossings, and HURT boasts 24,500 feet of elevation gain (and subsequent loss). Beginning at 6 a.m. on January 19th, 121 runners from nine countries had 36 hours to run five 20-mile loops through a semi-tropical rainforest in the mountains above Honolulu.

By 6 pm Sunday night, a record 53 runners had crossed the finish line, with four finishing in under 24 hours. Course-record holder Gary Robbins, 36, from North Vancouver, British Columbia, finished in 19:35, breaking his own 2010 course record. On a training run along the HURT trails in May of 2011, Robbins re-broke his foot and had to be rescued by helicopter—though no bandage could heal the dashed hopes of the ultrarunner who had seemed on the fast track to success. But Robbins wasn’t down for long. Returning to HURT this January, he sliced 37 minutes off his old course record, also marking the fourth consecutive year that Canadians have won the men’s race.

2011 female winner and active duty Navy Officer, Hannah Roberts, 26, originally from Honolulu, captured her second HURT victory, finishing in 25:41, a three-hour personal best (though still nearly two hours off Canadian Tracy Garneau’s course record). In her five-year racing career, Robert has accumulated a resume that includes a Badwater 135-mile finish in 2012 as well as wins in the Zion 100, the Cascade Crest 100 and the Peacock 54. Of her performance last weekend, says Roberts, “I was able to stay alert and upbeat most of the night, and, instead of worrying about blowing the lead, I enjoyed it and felt pretty confident that my legs would hold up.” 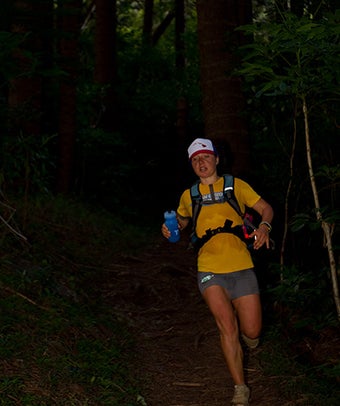 The 2011 and 2012 champion, Jason Loutitt, 38, of Squamish, British, Columbia, finished second in the men’s race, in 21:39, a PR by 48 minutes. Battling through a slump late in the race, Loutitt says the day was a struggle, but one he eventually overcame; “I had to get some motivation from others to not drop after hitting the wall at 80 miles. I look at it as a turning point in my life.”

Loutitt continued to fight it out in the final few miles against eventual third-place finisher Nickademus Anthony Hollon, 22, of San Diego, California, who finished in 21:43.

The second- and third-place women clocked top-10, all-time finishes as well. Mel Bos, of Kelowna British Columbia, came in second at 26:50 despite having to recover from a wrong turn on the course. Candice Burt, of Bellingham, Washington, was third in 28:35, an admirable effort considering she rolled her ankle early in the race.

“There is nothing like running in front of a hometown crowd … It is a very infectious and positive energy,” says Roberts.

Says race director Stan Jensen, a number of factors set this island 100 apart from other ultras: “The aloha spirit that starts with the low-key briefing on Friday, the blowing of a conch shell to start the race, the aid stations stocked with tasty food of many varieties and staffed with friendly volunteers (some in pirate costumes) and the awards banquet Monday night, with unique, locally-designed awards and photos/videos from the race.”

He also says this year featured the best course conditions in years, which led to the fast times and high finishing rate.