“The list of the top times at Hellgate is actually a Who’s Who of Ultrarunning,” 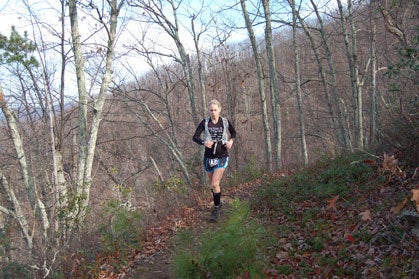 Amy Albu at mile 42 of the 2012 Hellgate 100K, on a long stretch overlooking the James River, climbing towards the Blue Ridge Parkway.
Photo by Blanks Blankinship

“The list of the top times at Hellgate is actually a Who’s Who of Ultrarunning,” says Sophie Spiedel, seven-time veteran and third-place finisher in the 2012 race. “The Hellgate field [always] has a good number of veterans, and we consider ourselves part of the Hellgate family with David Horton [race director] as our leader.”

This year, the hours leading up to the race start had a “somber feel” says Spediel, a result of David Horton’s impending seven-bypass, open-heart surgery. Evidencing Horton’s dedication, eventual third-place finisher, Troy Shellhammer wrote in an email, “Difficult though the race was, a bit of perspective was provided by [Horton’s] impending heart surgery. It’s a testament to how special this race is to him—and how important he is to the race—that he scheduled major surgery for the Monday after the race.”

Speidel continues, “On the day of the surgery, many, many runners of Hellgate and other David Horton events posted photos on Facebook of themselves at Horton race finish lines—he has so many supporters.”

Says accomplished area runner Eric Grossman, describing a moment of silence as the runners toed the line that Friday night, “The normal commotion of the start line gave way to complete quiet. While running ultras may be something people do for recreation, it would be hard to overstate the impact that Horton has had on peoples’ lives.”

Horton’s signature Hellgate 100K, held in the Blue Ridge Mountains near Natural Bridge, Virginia, is unlike most races. Its distance, GPS measured at greater than 66 miles, “delivers the same (if not more) epic feel of running a 100-miler, and is just as tough,” says Spiedel.

Horton, whose resume boasts over 70,000 cumulative miles, 110 ultra starts, 38 wins, an Appalachian Trail speed record and the third-fastest transcontinental crossing of the United States, is also race director of a number of other well-known and deservedly feared races, including Mountain Masochist 50-Mile Trail Race and the Holiday Lake 50K.

“Hellgate is classic Horton,” says Grossman, “There is no other event like Hellgate. Horton created it to inspire humility.”

Its unique challenges include the December race date and the midnight start time, the latter of which was implemented, Horton has said, to insure that all runners, no matter their speed, will spend the same amount of time in the dark. Due to unpredictable late-season weather conditions, the nature of the course varies greatly from year to year.

Another unique aspect of Hellgate, however, is what Grossman calls its “intimacy.” Hellgate is semi-invitational; Horton hand picks the field based on runner applications and experience. “Entries are capped to keep the numbers low—140 runners this year. Horton knows you. And he wants you to face your demons, even if it takes ‘Forever’ to do it,” says Grossman, referencing a notoriously challenging section of the race known as the Forever Trail. The race includes a pre-race family style meal, lodging at a comfortable bunkhouse and a great post-race party, including bonfires, bowls of chili and birthday cakes with friends old or new.

In 2012, the race’s 10th year, temperatures soared. Start temps hovered around 45 degrees and by midday Saturday, had risen to a humid 70 degrees. “Perfect for Californians but not-so-perfect for the East Coasters who have no acclimation!” says Spiedel.

Updating Horton’s Facebook page, his wife, Nancy, wrote, “I cannot begin to express our gratitude for the many prayers and so many comments & emails! It’s very humbling to see the photos and hear the stories. You have truly been a blessing! David is doing well. The doctors are amazed at how quickly he has come along.”