In 1963, John F. Kennedy issued a challenge to his military personnel: Run 50 miles in under 20 hours, a standard Teddy Roosevelt had set for his own military in the early 20th century. Non-commissioned military personnel, even civilians, took part in the 1963 “JFK 50-Mile Challenge” in Washington D.C., along with numerous similar locations across the country. On November 17th, that tradition continued with record-setting vigor.

Renamed the “JFK 50-Mile Memorial” in the wake of Kennedy’s assassination, the race has weathered the fluctuating popularity of ultrarunning. Of the many events spurred into existence by Kennedy’s original challenge, the “JFK 50 Mile Memorial” is the only one to have been held every year since. Celebrating its 50th anniversary this year, the race is now the oldest and largest trail ultra in existence. Fittingly, the recent running of the event saw both impressive first-timers’ debuts and tremendous improvements in course records across the board. 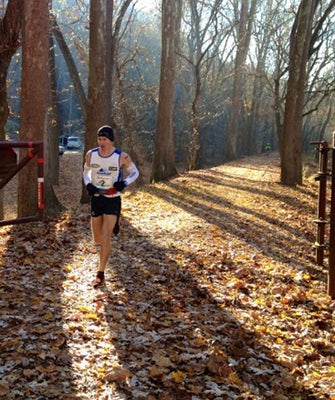 Max King leading the 2012 JFK 50 at mile 22.
Photo Courtesy of the Riddle family/iRunfar.com

This year’s race
Oregon’s Max King lowered the previous men’s record set by David Riddle in 2011, from 5:40:45 to 5:34:58. King completed the towpath marathon section in approximately 2:44. Admittedly exhausted by the third and final section of the race, he said he “clicked off the miles rather painfully, but still managed a decent clip”—he never went above a seven-minute-per-mile pace.

King cinched the win with an over three-minute margin over second-place finisher and first-time 50-miler, Trent Briney. Briney, whose marathon personal record is an impressive 2:12 (a minute faster than King’s), also bettered the old record by three minutes. David Riddle came in third, one of five men to finish the race in less than six hours. The runners credit the competitive showing with pushing them to record-setting times.

Though last year’s women’s champ, Cassie Scallon, did not return to the race, the women’s field was rife with talent. Ellie Greenwood, 33, a seasoned ultrarunner, fought for the lead against 26-year-old newcomer Emily Harrison, a 2:32 marathoner from Front Royal, Virginia, who used this year’s race as her ultrarunning debut.

Greenwood, who lives and trains in North Vancouver, excelled on the trail. She was the first woman off the AT, emerging ahead of many men, but soon lost her lead to Harrison—a lead she didn’t recover until the 50K mark. “[Trailing] Emily from miles 21 to 31 was a little disconcerting,” Greenwood says, “but I knew I needed to wait it out and not go too fast too soon.”

Overcoming some mid-race stomach issues, Greenwood picked off the 10th-place man with only the final stretch of the race to go. She held her position and came away with a victory, a top-10 finish and a new course record of 6:11:59, easily overthrowing the 2009 record of 6:29:21, set by Devon Yanko. Harrison came in under the previous course record as well, clocking 6:17:16.

Of her accomplishment, Greenwood says, “I went into the race knowing Devon Yanko’s course record was a good one and hoped I might be able to crack it, but didn’t expect the margin that I had!” 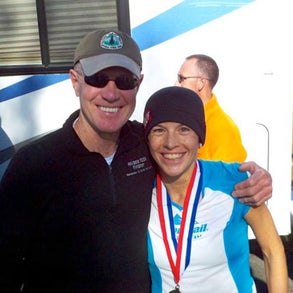 Ellie Greenwood with Dr. David Horton after the race.
Photo by Andy Mason, Courtesy of iRunfar.com

A historical course
The 50.2-mile course is a combination of roads and trails, including stretches of the Appalachian Trail (AT) and the C&O Canal towpath. Within the first 5.5 miles, the course gains about 1100 feet, which it later loses at mile 14.5. It passes some of the most significant locations of the Civil War, retracing the path 11 soldiers traversed in 1963 to pay homage to fallen soldiers. Only four of those original 11 finished that first race.

After a short paved climb, the route follows a technical and strenuous section of the AT, ending at mile 15.5; it then spends a beautiful if monotonous 26.3 miles on the C&O Canal towpath. It winds past the Civil War sites of South Mountain, Maryland Heights, Harpers Ferry as well as the Battle of Antietam, where 22,000 men died on a single day in 1862. The final 8.5 miles bring runners across rolling country roads to the finish line in Williamsport, Maryland.

The race is intended to test and honor those in military service, so it is no surprise, then, that one of the most prestigious prizes is the “Kennedy Cup.” Each year the four branches compete for the accolade and it is awarded to the top-finishing military team. Teams can consist of up to 10 runners, and are measured by adding together the top five finishers’ times. The lowest score wins. This year, in a field half composed of active and retired military personnel, the Cup was won by a group of Air Force personnel: Brian Dumm, Elissa Ballas, Jason Brosseau, Mike Wasson, Anne Portlock and Elisa McGhee. Their combined time was 34:46:45, almost seven hours faster than the second-place team.

Reflective of the esteem with which military men and women are viewed by race coordinators and participants, race directors Mike Spinnler and Tom Shantz told The Herald Mail they never turn away a member of the military who registers to run; Shantz summed up this philosophy saying, “Without them, we don’t even have a race, or anything else for that matter.”

The legendary race fills up early, and, with a field limited to 1000 runners, the chance to toe the line is highly sought. In fact, between 8000 and 10,000 hopeful applicants were rejected this year. The reason for the strict limit is the section of the trail run on the AT. A dispute between the JFK directors and Appalachian National Scenic Trail Superintendent Pamela Underhill has escalated ferociously in recent years. Permission to use the trail is never guaranteed, Mike Spinnler says, adding that, “One year, the permit was secured 10 hours before the race began.”

In an email Spinnler shared with The Herald Mail, Underhill is quoted as saying, “Growing aspirations for the race render it no longer even remotely compatible with the AT.” She also threatened to deny future permits for use of the trail altogether.

Controversies aside, Spinnler was thrilled with the race’s outcome this year, saying in an interview with The Herald Mail, “The level of competition here has never been better in the 50-year history of the JFK. … I honestly believe that Max King is the best 50-mile runner on the planet.”

Having fired the starting pistol on race day, Teddy Roosevelt IV was at the finish line to shake hands with an exhausted King, who apologized for not standing up to greet him. Roosevelt replied that King’s accomplishment and, indeed, the event itself, is what “makes us all proud to be Americans.”