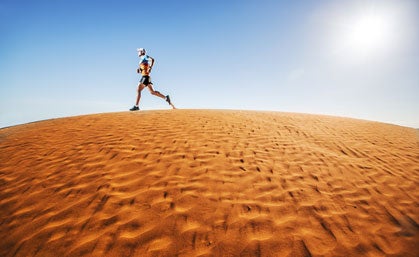 Greg Donovan is not a man known to do anything in half measures. Running the New York Marathon in 2002, the Australian endurance athlete raised a staggering $150,000 for the education of children whose parents were among the 3000 people who lost their lives in the terrorist attack of September 11. And he completed the 26.2-mile feat with a stress fracture in his leg, no less.

So when his 14-year-old son was diagnosed with Type 1 diabetes five years ago, Donovan vowed to do “everything he could”. While most people expected him to go to inordinate lengths to help, just how far he would go—literally—is extraordinary. 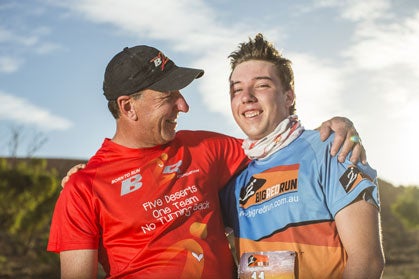 Greg Donovan and his son Steven. Photo by Chris Ord.

It was the icing on the cake for Donovan’s big year of running for the cause. The Big Red Run was his fifth desert race in 18 months, having completed all four of the Racing The Planet desert races in 2012 along with a team of four other runners. That’s a whopping 778 miles, not taking into account the training required for this super-human challenge. His charitable efforts, and the energy which they generate, touch all that cross his path.

So it was no surprise that the inaugural Big Red Run was infused with a tangible benevolent spirit, as 58 dedicated athletes from Australia and Asia ran their hearts out against the backdrop of the Simpson Desert. 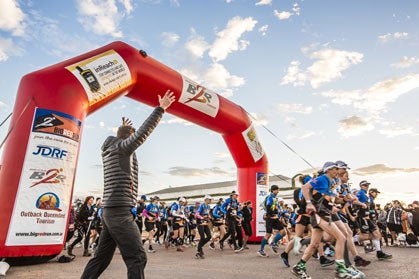 And they’re off! Runners head for 250 kilometers of central Australian desert from outside the iconic Birdsville Pub, Queensland. Photo by Chris Ord.

Following in the footsteps of the great desert races before it, the Big Red Run offered a six-day running challenge with a luxurious twist: runners only had to carry daypacks, and friends and family could join in the adventure, welcoming runners back to camp each day. A separate marathon was held in conjunction with the event, offering another option for those keen to participate and contribute to the cause.

The combination of efforts resulted in a unique event, bringing together a special community of runners in the great Aussie Outback. 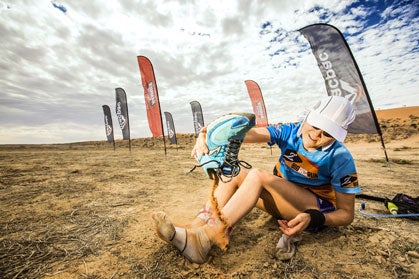 Part of the daily grind: Winner Jess Baker empties her shoes of the desert sand that wreaked havoc on so many runners’ feet. Photo by Chris Ord.

But perhaps the true champion of the event was Mark Moala, an Australian-Tongan who set out to inspire his family and Tongan community, despite having never run further than 16 miles before taking on the Big Red.

After six days gutting it out, Moala crossed the line last to a rousing ovation from the crowd and fellow competitors. He’d barely slept the night before, being the last to finish the previous day, after 53 miles in the desert. Legendary Australian ultrarunner Pat Farmer—known for running more than 12,500 miles from the North Pole to the South Pole—bear hugged Mark at the finish, and told him, “You’re my hero, mate. You inspire me.” 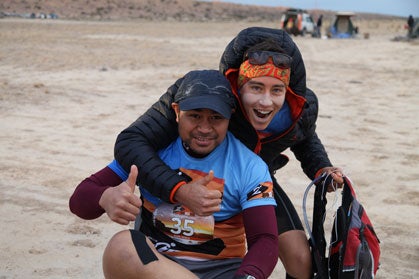 Mark Maola with the man who got him into his first ultra, Matt Donovan, Greg’s older son. Photo by Chris Ord.

It’s an understatement to say that every runner who took part was an inspiration, with $150,000 raised from the event.

Runners completed a marathon a day for three days. Day four was 19 miles before the “long day” of 53 miles, while the final day was a five-mile dash to the pub in Birdsville, a town of 120 people—a fitting finish to what will surely become an iconic Australian event. 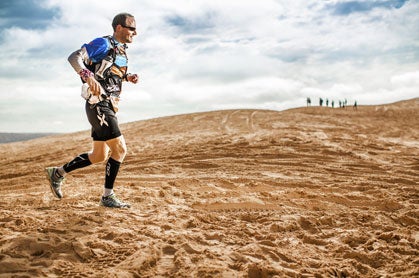 A small gathering looks on as a competitor crests Big Red, the day’s finish line 500 meters away, down the other side. Photo by Chris Ord.

For information on the 2014 race, visit www.bigredrun.com.au