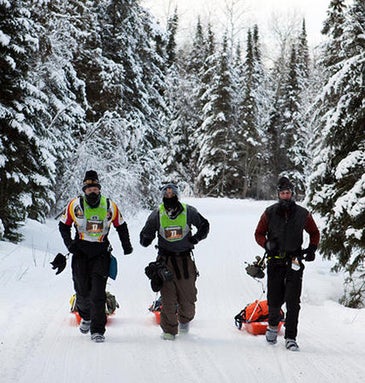 The finishers are a distinctive bunch—easily recognized by their icicle-laden eyelashes, mustaches and exposed skin. A cutoff-time mandated 60 hours of human-powered exertion in temperatures typically ranging from 30 to 50 degrees below zero characterize the Arrowhead 135, which traverses 135 wintery miles across northern Minnesota, from International Falls near the Canadian border to Tower. For comparison’s sake, note that the Antarctic Ice Marathon, run a few hundred miles from the South Pole, has an average temperature range of 14 to minus-4 degrees Fahrenheit.

It’s no surprise that locals have taken to referring to the Arrowhead area as the “Icebox of the Nation,” even, as the race website attests, renaming International Falls: “Frostbite Falls.” Race Director David Pramann and five-time Arrowhead finisher noted that racers must prepare for “a tremendous variety of unpredictable conditions.”

Even so, those harsh conditions haven’t kept the intrepid from taking on, … no, flocking to this adventurous event. The inaugural race in 2005 featured 10 entrants. By 2013, there were 135 athletes from 21 states and 6 countries filling the race quota, competing in one of three categories: ski, run or bike. Runners from around the world—from Brazil, France, Australia and Canada—toed the line as this year’s race, which began January 28th at 7 a.m. The dark morning air was a pleasant 24 degrees Fahrenheit, though racers faced a large winter storm that was well underway; it would dump 12 inches of snow on the trail by the race finish.

Just over 14 hours later (14:20), with temperatures settled solidly into the single digits, a new record was set by bike competitor Todd McFadden, a Minnesota native. The first skier, Mark Scotch of Wisconsin crossed the finish line after nearly 39 hours. Forty two runners set out to tackle the distance, and only seven were still on the course by the final checkpoint, 35 miles from the finish. Parker Rios of Wisconsin claimed the victory in 45 hours 40 minutes. The second-place runner, John Storkamp of Minnesota, completed the race in 51 hours 33 minutes. Eric Johnson of Utah took third in 54:37. Only four other runners finished the race, the final finisher crossed the line a mere 16 minutes before the cut off. No female competitors made it past the 70-mile checkpoint. Though the finish rate (49 out of 135) may not sound impressive, Pranaam called this year “the best and most competitive Arrowhead yet.”

The race traverses the Arrowhead State Trail, a multi-purpose trail used primarily for snowmobiling in the winter. The majority of the trail is wide and well groomed, although the race takes place during what the race directors somewhat masochistically say is “hopefully the coldest time of year.”

“You can freeze your tail off if not careful and then we would feel very, very bad and the race likely would not happen next year and we would have to notify your next of kin,” says the race’s website.

Racers are required to carry mandatory gear that includes a sleeping bag rated to at least minus-20-degrees Fahrenheit (though a colder rating is strongly recommended), an insulated sleeping pad, a bivy sack or tent, a fire starter, a stove and pot, a consistent supply of at least eight ounces of fuel, a consistent supply of at least 3000 calories of food, approximately two liters of insulated water and a headlamp. There are three checkpoints, roughly 35 miles apart, and a total of nine shelters, from seven to 14 miles apart. Drop bags with non-essential items are flown in via small ski plane to checkpoint locations.

To keep fees low, the event aims to break even financially. Any proceeds, however, are donated to the Special Operations Warrior Foundation Charity, providing college scholarships to children of US Spec Ops Soldiers killed and wounded or Minnesota Safe Families, a charity working to prevent child abuse.

New in 2013, the top runner (and cyclist) receives a free guaranteed entry into the Granddaddy of Ultras, the 2014 Iditarod Trail Invitational. The Invitational is a completely self-sufficient 350-mile foot (or bike) race from Knik Lake, Alaska, to McGrath, Alaska. Runners who finish the 350-mile race receive four points toward qualification for The North Face Ultra-Trail du Mont-Blanc.

The Arrowhead 135 is part of a small but daunting category of races covering 135 miles. The Badwater Ultra is a well-known mid-summer race across Death Valley, where temps can top 130 degrees. The Brazil 135, which took place January 17 to 18 this year, is run on a notoriously difficult Brazilian pilgrimage path and boasts approximately 30,000 feet of climbing and 28,000 feet of descending. The Badwater Ultra, the Brazil 135 and the Arrowhead 135 make up the Badwater World Cup, a challenge requiring competitors to finish all three races in the same calendar year. Few attempt, much less complete, the challenge. “One-hundred-thirty-five miles is a great distance,” says Pramann, “You cannot fake it at 135 miles.”