A smart phone and a dumb runner seek silence 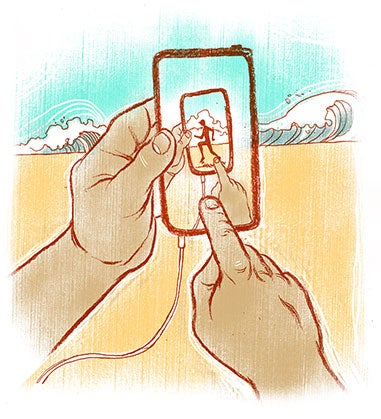 The chirping finches, the sad back-and-forth call of the foghorns beneath the Golden Gate Bridge and the whisper of the sea breeze through the cypress: The nasal voice of Ira Glass introducing “This American Life” obscured them all.

Weaving through a nine-mile network of trails within the compact city of San Francisco,  I was also spared the shriek of a fire truck, the shouts in my direction of an unkempt man and a deafening ensemble of after-market exhaust pipes and oversized subwoofers.

Glass laughed, a stunted, awkward bark, as I carried on blissfully unaware, if only for a bit, of the city’s madness.

Last summer I finally joined  the masses with the purchase  of a wallet-sized monolith of  information—the iPhone. I soon  realized that as long as I had a  charged battery and was within  reception, I could treat my ears  and mind to a short vacation  from the bustling city where I  live. The added perks of never  getting lost, always finding the answer and photographing my runs quickly earned my new device a permanent spot in my back pocket.

I loaded my phone with an array of apps that timed and mapped my runs, improved my photography, supplied news and promised to make me smarter with daily deliveries of thought- provoking quotes.

When I grew tired of listening to music, I graduated to podcasts, and quickly found that, even running in the middle of San Francisco, I could exist vicariously anywhere in the world.

Running has always been more than just a sport: It has served as my therapist, solitude, company and, at times, punching bag. Once the thought of plugging in for a run would have seemed as foreign as listening to a baseball game during a church service. However, as a friend said: “Technology moves much faster than wisdom.”

I left Golden Gate Park and crossed Highway 1 as Glass finished a story about a rest-stop worker in Michigan and started in on one about a man’s close relationship to his parrot. Running up Ocean Beach, I found  a dead seagull and a dozen fragmented sand dollars washed in with the tide. I photographed the bird, augmented it with one of Instagram’s many filters and, when finally it looked more fantastic than real life, fed it to Twitter and Facebook.

I was farther down the beach when Glass’s voice was interrupted by the familiar tone of an incoming call.

I tapped the red “Ignore” button and carried on.

A text came through from my girlfriend asking if I needed anything from the store.

After sending off the text, I stood staring off into the vastness of the Pacific Ocean. I watched the rolling waves crash in, listened not to their distinguished boom but to the voice of Glass: “Greetings, podcast listeners …”

My phone buzzed to alert me of my incoming daily quote. This one was from the Alsatian artist Jean Arp:

“Soon silence will have passed into legend. man has turned his back on silence. Day after day he invents machines and devices that increase noise and distract humanity from the essence of life, contemplation, meditation.”

I pulled the buds from my ears and the sound of the waves, seagulls, traffic and airplanes took over.

And in the collective sound, I gained a sensation created not by shutting things out, but rather allowing it all to flow in, unfiltered.

My surprise encounter begged a single question—in a world spilling over with information, can we maintain the wisdom to know when to unplug?

The Optimist’s Guide to Climate Change