Watching is better than you think

One of the biggest downfalls of trail running is that it’s not a spectator-friendly sport. You never see tailgating parties, … 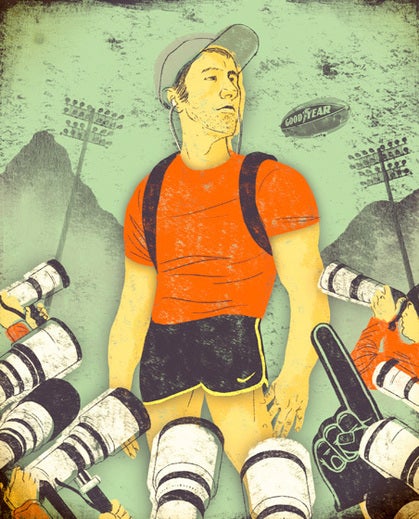 One of the biggest downfalls of trail running is that it’s not a spectator-friendly sport. You never see tailgating parties, cheerleaders or couch-potato beer-drinkers lining the stands at a trail race. The only way to get a good view of a trail race is to pay the entry fee and run it, which is a real buzz kill if you’re a beer-drinking spectator.

But even if we race, our own drama is all we really experience, or perhaps that of the person right beside or in front of us. At the end of events, posted results allow us to marvel at the winners’ times, but we never see how they did it, how they suffered or how they thrived.

In June, I was able to spectate the inaugural Vail Pass Half Marathon at the Teva Mountain Games (I was saving myself for a 10K the next day), and I’m here to say wow. It was fun.

The race was 13.7 miles, starting in Vail, Colorado, and topping out at about 10,100 feet on Vail Pass, with nearly 3000 feet of elevation gain. It was run mostly on bike paths and side streets that parallel I-70, a major highway, so I thought I could follow the action.

To fuel up for the experience, I ate a bowl of oatmeal on the hood of my car parked at the start line, and guzzled green tea from a jug. I unloaded the Huffy mountain bike I found at the end of someone’s driveway with a “free” sign on it, and was ready to spectate.

Rolling through the crowd like a redneck at NASCAR pits, I checked out the competition. Matt Carpenter, Simon Gutierrez, Rickey Gates, Joseph Gray, to name a few. Big names were in the house, cash money was the prize, and these guys like to win.

“Should be a good race!” I mumbled to no one in particular as the gun sounded.

I’ve been behind these guys in a lot of races, but I never realized how fast they were going until I tried to keep up with them on a bike. Simon led the pack through the first mile and the poor old Huffy’s gears were grinding off metal chunks keeping pace.

After just six minutes, the lead pack of seven had already distanced itself from the rest of the field by nearly a minute. Simon, Matt and Rickey led the charge.

At that point I turned around and pedaled back to the start, cheering on runners I recognized in the swarm: Duncan Callahan, Charlie Wertheim, Megan Lund, Cindy O’Neill.

I threw the Huffy on the roof of my car and raced up the road with my wife to the three-plus-mile mark. We power slid into the median just in time to see Rickey and Matt churn ahead, with a little gap on Joseph and Simon, and a big gap on everyone else.

We hung out by the stream there, running back and forth to cheer the runners, and staying long enough to see the women’s leader, Megan Lund, cruise by with a comfortable lead. Then we hopped back in the car and drove up the highway to the 10-mile mark for a half-time snack bar and some speculation. It was too tight to call.

We staked out a good viewpoint in the sunshine and waited until Rickey, then Joseph, then Matt came by, all less than a minute apart. We ran alongside them offering support and taking pictures, but got winded. It was still anyone’s race, but Matt had that look, the one a lion might get when he just spotted a weak gazelle and decided to attack.

Barreling into the finish area, I re-enlisted the Huffy to gain a view of the last mile’s drama. I cranked downhill to see Rickey round the corner first, but Matt was closing in. Joseph had fallen victim and seemed out of it. The old master, Matt, made a push that would’ve broken many, but a smiling Rickey held on for the win. Matt was second, Joseph third, Simon fourth. Megan dominated among the women.

The very next day I ran a technical 10K trail race (Spring Runoff) with all these same runners. I saw them at the start, and I saw them at the finish. But this time Matt apparently won, Joseph was second, Rickey was third and Simon fourth.

They supposedly crushed everyone else in the field, even those who didn’t race the day before. I say “supposedly” because I didn’t see them do it. And when the full results came out in the paper and online the next day, none of those top four men were mentioned. On the women’s side, the top four—Brandy Erholtz, Laura Haefeli, Megan Kimmel and Megan Lund—weren’t mentioned, either, inadvertently reduced to a typographical error.

If we had more spectators and reporters, this kind of thing probably wouldn’t happen. But I’ve found it takes a lot of effort to be a trail-racing spectator, so you’d better get in shape.

Bernie occasionally wins his age group when Matt and Simon are omitted from the results.