Can that be run or—ow!

Three buzzards sailed down for a closer look. “I’m not dead yet,” I yelled, gesturing a crusty middle finger. … 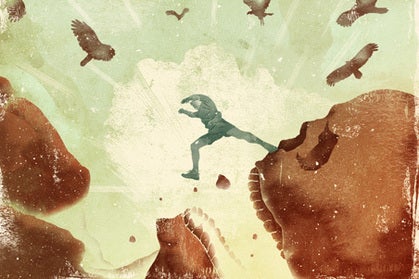 Three buzzards sailed down for a closer look. “I’m not dead yet,” I yelled, gesturing a crusty middle finger.

My knees were still bleeding, but my knuckles had dried. I tore off a piece of napkin, stuck it to a knee wound, and impassively watched it turn red as I pulled out my dinner. Sardines again.

I should’ve nailed the drop onto that hoodoo. The seven-foot flight was too much for a one-legged running landing, and I collapsed headfirst over the edge, completely missing the next hoodoo. I fell five feet onto hard dirt for a close-up view of Goblin Valley, Utah. Again.

The trot back to the car gave me time to assess the runnability factor of what I had just tried. On a scale of one to 10, I gave it a three. I could’ve run it on a better day.

The experience of running across the tops of hoodoos seven to 10 feet high still ranked a 10 in my thoughts, right up there with running across stone arches and cliff ledges. But finding the right combination of rocks proved to be more difficult than finding arches and ledges that worked. Miscalculations could result in brain surgery or, worse, not being able to run.

I recovered on the hood of my car at sunset, watching the reddish-brown waters of the Dirty Devil mix with the emerald green waters of the Colorado River below. Somewhere upstream a storm had made the mountains bleed, and the water just kept running.

Sardines are good from the can, scooped out with a knife. I could feel energy swimming back into my veins with every bite, healing my wounds. The buzzards kept circling, catching the rising thermals of the sun-baked cliff and the curious smells emanating from my person. They looked hopeful.

The next morning, after spending the night under millions of flickering stars, perched on a 300-foot cliff ledge in Glen Canyon, I was feeling hopeful too. My wake-up run had me rock-hopping along the rim of Lake Powell, soaking up the sunrise like a donut in coffee, my knee barely swollen.

The next stop on my road trip to Saint George, Utah, was Hickman Arch in Capitol Reef National Park. The trail was fairly easy, but running through the sandy sections felt like snowshoeing. I couldn’t find a way to the top of the arch, so I ran through it, spicing it up by finding several pointy boulders to hop across. They were totally runnable, even if they didn’t look it.

The Dixie National Forest sucked me in that same afternoon. Log jumping through aspens on fallen aspens was irresistible.

When I got to Bryce Canyon National Park that night, I saw more trails than shoes in my closet, and they were all runnable. I found myself re-sharpening my log-running skills by navigating the top of the log railing containing the rim. (I shouldn’t recommend that, but I’d give it an eight).

After running to Inspiration Point in Bryce for sunrise the next morning, it was a short drive to the Cedar Breaks National Monument, where meadows and streams called to me. I found myself boulder hopping from rock to rock to reach a runnable beaver dam bridge that offered easy access to the forests beyond. Sometimes it’s hard to find someplace that’s not runnable, but I stopped running to watch two bucks jousting.

Running all these places three days before the Saint George Marathon was probably a boneheaded idea. It’s not what experts would recommend. But it was too hard to pass through great trail-running territory without sampling it.

“So, you’re running conservative then?”

“Too much stuff going on. ”

I’d raced over 55 miles in five different trail races in the four weeks leading up to the marathon. And I just told you how I tapered.

I finished with a 2:52, hopped in the car, drove to Vermillion Cliffs National Monument and went for another three-hour trail run/walk. The next morning, I was on mountain trails above Telluride for another three hours, all the while searching for more places to call runnable.

This is how I know I’m a trail runner: not being able to resist. Running roads often has me daydreaming. But if I want to wake up and feel alive, there’s nothing like trying to run where nobody’s run before.

Bernie sews his own stitches.