The cold penetrates to my core. I am lying underneath my giant Forest Service map as a rogue thunderstorm bathes the canyon, an intense deluge that lasts about 30 minutes. … 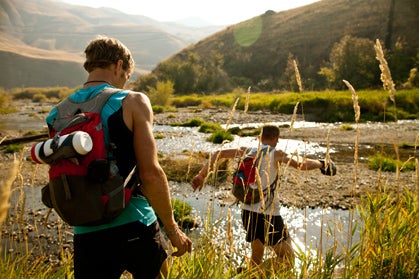 The cold penetrates to my core. I am lying underneath my giant Forest Service map as a rogue thunderstorm bathes the canyon, an intense deluge that lasts about 30 minutes. Ty Draney, my good friend and ultrarunner extraordinaire, who is under the other map that we brought, sounds like he is getting some rest. I am incredibly envious that he is able to doze off, as I am shivering far too hard to coax my body into even a light sleep. The rain quickly passes, and I endure the shivering for another 10 to 15 minutes. Then I crack. I wake Ty and again we force our depleted bodies to move.

Several years before I found myself sleeping under an oversize map, I worked on the Middle Fork of the Salmon River as a raft guide. That summer I often pondered what it would be like to travel through the heart of the Frank Church Wilderness along the river on the trail. I didn’t run at the time, and it seemed impossible—80 miles of travel along the river followed by another 40 or so to get back to civilization. Yet the seed had been planted.

Then, a year ago I brought up the idea of running the Middle Fork to Ty, who is always up for adventure. We planned on hitting the trail in July, but due to an exceptionally large snowpack that persevered into late summer, the Bighorn Crags, incredible granite peaks and alpine lakes in Idaho’s remote Frank Church Wilderness, were impassable. Undeterred, we postponed until late September, hoping to catch a break in the weather before old man winter returned. 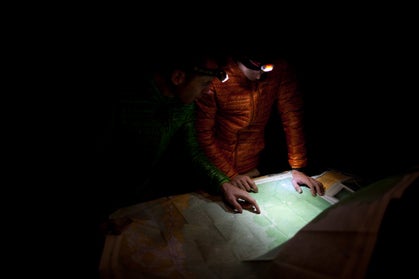 In the interim I contacted Save Our Wild Salmon, an environmental group that works to preserve and restore wild salmon habitat, about teaming up and using our run to draw attention to their incredible work. On the surface it may not seem like there is a connection between running over 100 miles and salmon swimming over 900 miles to spawn, but we found many similarities during the run, most having to do with following a difficult route. The public partnership with Save Our Wild Salmon did add some pressure to the run; now it wouldn’t just be two guys going for a really long run mostly unnoticed; if we failed, we would fail publicly.

The last weekend in September Ty, Handsome Matt, a photographer, shuttle driver and all-around nice guy, and I drove to the Middle Fork’s trailhead. We arrived just before dark, shot a few pictures and went to bed, anxious for what lay ahead.

Just after dawn Ty and I set out doing our best to moderate the pace. Rather early in the day it became obvious that something was “off.” It was taking too long to get to well-known landmarks along the river, even though we were moving quickly. I now realize that I had erroneously based our mileage on the miles traveled while on the river … not the trail. Extra mileage would subtly be added for the next 80 river miles.

Despite running all day, even in the afternoon when it was very hot, we were severely off our planned pace. When darkness settled in we pressed on until river mile 61, where we stopped at a popular river camp to get some rest. A friendly rafting group was there, and they shared their fire and a few tube steaks. We slept well in the sand by the fire for a couple of hours.

Eager to finish before sunset on our second day, we left the river camp at 3:30 a.m., the soreness from the the previous days’ miles quickly fading away as we ran through the early morning darkness. A couple of hours later we were drawn into the bright lights of the Flying B Ranch, a remote hunting lodge with a buffet breakfast. It was quite the sight to have two scrawny, brightly clothed runners rubbing shoulders with 20 or so camoflauged elk hunters! Sticking out like sore thumbs, we focused on calorie loading for the miles to come. The overindulgence at breakfast forced a slow pace for a while but paid dividends later in the day. Just after 9 a.m., with 80 river miles behind us, we started ascending into the Bighorn Crags, and into unknown territory.

Not long after leaving the river we took a wrong turn and unknowingly traveled quite some time in the wrong direction until the trail vanished. We searched, brainstormed trying to match topography to the map, and fumbled onward. Over five hours later we were on the right track, just over a mile from where we had made the error. It was frustrating, but what can one do when in the heart of a roadless wilderness area? We pressed on, undeterred.  The beauty of the Bighorn Crags took our minds off of the fact that we had planned on finishing before dark. The sun was low in the sky and we still had more than 20 miles to go. 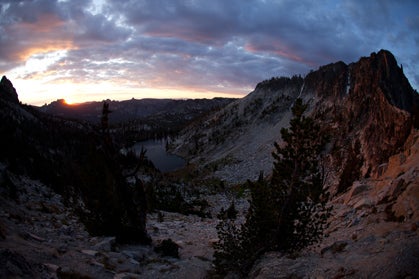 A bull elk bugled as the sun set. The serenade boosted our spirits and we rallied, picking up the pace. Then the trail ended. We figured it was just overgrown so we pushed on, finding hints of where a trail had been every now and then. Once upon a time it was a good trail, our map said so, but now it was an overgrown and eroded mess, nearly impossible to follow. We slowly navigated downstream, constantly climbing over downed trees, wading back and forth across the thigh-deep stream, and forcing a path through thousands of wild-rose bushes.

Around midnight a thunderstorm forced us to seek shelter under our maps. A few hours later we could not find a route downstream in a narrow portion of the canyon and again, hunkered down for several hours. Exhausted, we sat shivering, anxiously awaiting the sun to illuminate our path. It was two of the longest hours of my life. 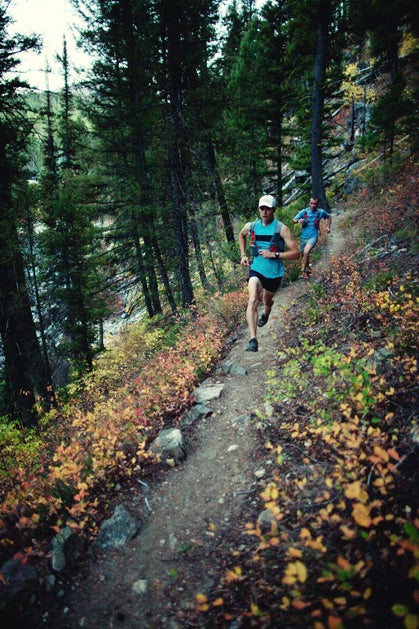 Finally, with the sun low in the sky, we found the way forward, which unfortunately led to several more hours of bushwhacking. Around 10 a.m. we heard a yell and then we saw him, Handsome Matt, who had come to meet us and guide us out. We were more than 12 hours behind schedule. The last few miles blurred together. After a final creek crossing we were at our truck, 52 hours after starting the journey of what turned out to be nearly 140 miles, an epic adventure during which I garnered more respect for the truly wild places of the earth, and I learned a great deal about how to dig deep.

Wild salmon born in a mountain stream, travel downstream all the way to the Pacific Ocean, and a few years later, make the return trip, upstream, to where they were born. The disappearing Snake River salmon will travel an amazing 1000 miles and 6000 feet in elevation to return to Idaho’s Redfish Lake, where they will spawn and die. To find out more, visit: www.wildsalmon.org.

Luke Nelson is an elite ski mountaineering racer and mountain runner who lives in Pocatello, Idaho, with his wife,Tanae, and daughters Brynlee and Chlöe. Check out his blog.

Matthew Irving is a photographer in Salt Lake City, Utah. When he isn’t shooting photos, he spends most of his time shooting and editing video for Camp 4 Collective.