Enjoy the drive … however it arrives.

Last month the miles came effortlessly. I could fall out of bed and immediately run eight miles. My feet glided over the trail. … 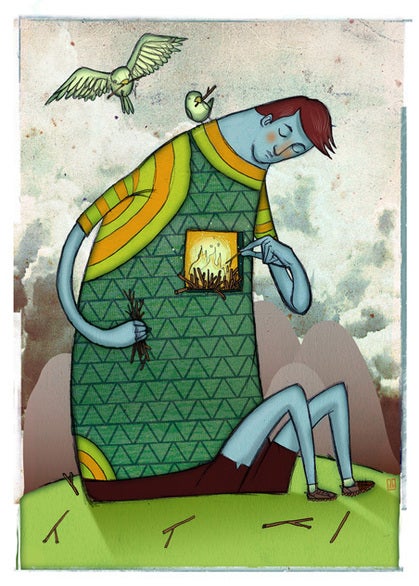 Last month the miles came effortlessly. I could fall out of bed and immediately run eight miles. My feet glided over the trail. I even maintained my dignity on the local, heart-pumping climb up Bear Peak, normally a red-hot spike in my gut, quads and calves.

Yet late last summer every mile felt uphill. I could not wrap my head around running even two miles. Every morning my snooze alarm worked overtime. I’d procrastinate my run until after work, and then fall victim to watching Family Guy re-runs.

Why is it that some seasons the level of motivation runs as high as spring run-off and, in others, my well of mojo is as dry as the Mojave?

Books have been written, songs sung and ad campaigns run on the Fire Within. Heart. Guts. Cajones. Hunger. Courage. Impetus. Tenacity. Human Will. Drive has more names than a pro wrestler. Yet its origins remain a mystery.

Some say that you either have it or you don’t. That’s an oversimplification. Like when people throw up their arms and say, “It is what it is.” If you’re so willing to surrender to perceived fate, then your area of expertise is not motivation.

I’ve seen other trail runners experience breakthroughs, boosted into a higher orbit by some previously hidden drive. They seem to discover another gear, and we suddenly see them in a different light.

Life events can be the spark to light the powder keg of a trail runner’s pent-up potential. Adam Ray of Oakland gets that. He and his wife recently divorced, and he quickly discovered a deeper relationship with the trail.

“Being suddenly without your marriage awakens the drive to run with wild abandon,” says Ray. “At times that I ran like poor old Richard Pryor when he set himself on fire. I craved the simplicity and clarity of mind that comes with training and racing.”

Another life event that’s brought runners closer to the doorstep of greatness is childbirth. Helen Cospolich of Breckenridge, Colorado, found a bottomless well of motivation—and a new appreciation for trail miles—after the birth of her daughter in 2005. “Running became my `me time’ and I cherished every minute of it,” she says. Being a parent, she says, “changed how I felt about the sport in general. I was incredibly inspired and excited. And I was motivated to get back to my pre-pregnancy fitness.” Cospolich didn’t tip toe back into competition, either; she won the beastly Leadville Trail 100 in 2008, just three years later.

On the flip side, saying goodbye to somebody can also be a powerful motivator. Diane van Deren of Sedalia, Colorado, saw her son leave for war in Iraq and turned to singletrack for solace. “When Mike was in Iraq I found that running the trails was a great way to escape from the worry and unknowns he was enduring. The trails were my safe spot and took my mind to a sense of peacefulness.”

With her son trying his best to avoid IEDs thousands of miles away, Van Deren ran thousands of miles herself. It paid off, as she won Illinois’ 2007 McNaughton Park 150 Miler and the 2008 430-mile Yukon Quest foot race in frigid Alaska. Upon finishing the latter, she was thrilled to receive an email from Mike saying he was fine, and proud of her.

As for me, I’m not experiencing any of these life-changing events, which may just disprove my theory. My day-to-day routine has been drama free, as I move forward with the head-bobbing monotony of a drum circle. Perhaps my Fire still smolders from previous life events, like that campfire that radiates heat long after it’s put out. If that’s the case, I should throw in some kindling. Race season is upon us and the field is ablaze with divorced, unemployed and empty-nested speedsters. And I’m most certainly not giving birth any time soon.