I’m cursed. I know this because after researching it on the internet, I found irrefutable evidence. Wiki Answers said, … 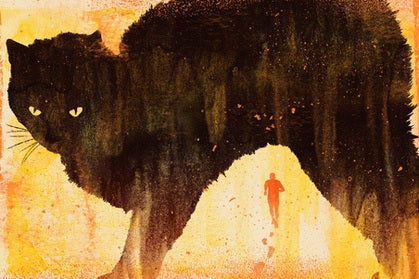 I’m cursed. I know this because after researching it on the internet, I found irrefutable evidence. Wiki Answers said, “If you believe you’re cursed … you are.”

I knew it! It’s just like the time I believed I was a trail runner, and then I was one.

My bad luck is way beyond the realm of random chance, but, until recently, I didn’t realize misfortunes had benefits.

The realization emerged on a recent trip to Boise, Idaho, to race the Dry Creek Half Marathon. On the way there I went to Antelope Island to see bison. It was a beautiful day and I was getting great photos when a cantankerous brute decided he’d had enough. He singled me out, and chased me all the way back to my car.

Some might call this bad luck, but I’d been thinking all week that I should do some speed work. The adrenaline shot also kept me wide-eyed till Idaho, so I didn’t risk dozing off at 70 mph.

Then, though it had been sunny for weeks, the clouds rolled in on race morning, and the rain blew in sideways as temperatures plummeted. You’d think this was bad luck, but no. The course that would’ve been smooth and fast became muddy and technical, which worked to my advantage since it felt just like snowshoeing. Speedy is not how I typically run races, but I can slide through slippery terrain like a river otter.

I finished second and thought the storm was over when the sun reappeared at the finish. But going home, I drove straight into a blizzard near Salt Lake City. The windshield wiper broke climbing up Soldier Summit pass, the wiper fluid ran dry and, when I stopped to scrape the window off, the ice scraper broke. Picking it up I noticed a big oil puddle forming under the car. My brakes were smoking down the pass as I coasted to save the dry engine from seizing. My face froze driving with my head out the window to see, and the water dripping in shorted out the window, leaving it stuck wide open in the blizzard.

At the bottom of the mountain, in Price, the sun popped out again and I patched up the car. With bad luck abating and adrenaline soaring, the only thing to do was run. It felt as natural as a fight-or-flight response. I respond to stress by running.

Visible from the highway, a dirt trail headed west into the San Rafael Swell, and I ran till the trail vanished, then I ran some more. I was flying!

That’s when I found an old mine. I looked in. Then I found another, and another, and another … It was fun exploring abandoned mines until I walked into the one with the upside-down crosses hung from the ceiling, several scrawled with “666.” A big wooden dynamite box lid hung there too with “HE IS HERE” in black letters upon it. Four pitch-black tunnels led away underground beyond the display. It was way more effective than a “No Trespassing” sign.

Hairs stood up on the back of my neck, and before I could catch the creepiness, I was 10 kilometers east.

Arriving home I opened the mail and discovered my renters had bailed while I was gone, leaving me $2000 in the hole. And when I went to the unit and found damages in every room, like broken windows, foot-sized holes in walls and doors and carpets ruined, I ran hard. Eighteen miles flew by, as I barely noticed I was running.

The next day I was sore but the stove quit working and was blinking “F3” like a tornado warning. That’s when mom called to tell me dad had fallen and broken five ribs. I couldn’t get there because of my car, but I ran another 18 good miles. Then the toilet overflowed and my plunger cracked. The kitchen faucet broke and wouldn’t shut off at the same time the drain seal failed. The answering machine broke, the TV receiver quit, the garage door rolled off its track and my computer fried itself.

They say bad things come in threes. Maybe they’re right. I made a list and counted 33 of them in three weeks. But for every thing that went sour, my runs got longer or faster. Over 300 miles in three weeks. I’m getting close to a PR, so I hope the bad luck continues.

Bernie is a wishful thinker.