Running in the winter sounded like fun … in the summer.

“Do not go outside today unless you have to,” ordered the weather woman as I zipped a jacket over an insulating vest, … 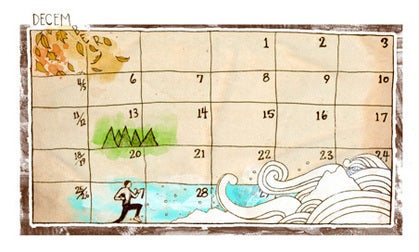 “Do not go outside today unless you have to,” ordered the weather woman as I zipped a jacket over an insulating vest, which was over a base layer. The dog was nowhere to be found: moments earlier, when I let him back inside after his morning pee, he hid. Man’s best friend—or fair-weather friend?

I hit “start” on my watch, pulled on my mittens, and stepped into the sub-zero, pre-dawn air.

Several months earlier, I had practically crawled back to the car, with both big water bottles bone dry, after a trail run in triple-digit heat, wishing I could be transported into the Siberian winter.

Be careful what you wish for. The morning’s cold literally took my breath away. Did I need a fourth layer?

My breath crystallized in mid-air, and my frosted eyelashes blinked trying to clear the tears, in vain.

According to the Internet, which we know to be completely accurate and trustworthy on all things, the body has two main reactions to extreme cold. First, it shuts down loss of water through perspiration to decrease heat loss due to the evaporative cooling of the skin.

But my body did not get that memo. As I ran, my sweat soaked upward through my layers until it froze against the inside of my outermost shell. Soon, my limbs and torso felt as rigid as Iron Man in a starched shirt.

Second, the body will try to generate heat by increasing metabolic activity often through involuntary muscle activity. Translation: it shivers. As the snow crunched under my feet, I staved off the shivers. On some level, I was trying to outrun the cold.

The increase in metabolic activity reaction does make sense, though. After a cold-weather run, are you ever so hungry that you could eat a deep-fried horse? I am, and I’ve been a vegetarian for 18 years.

The intense cold of deep winter brings challenges that are foreign to warmer, more hospitable temperatures.

Once, only three miles into a 20-mile snowshoes race in the Rockies, I slowed to sip from my hydration pack and got nothing. The entire hose was logjammed with ice. I had to tuck the tube and entire bladder into my jacket and wait for it to thaw, which it did. Around Mile 18.

Another time, in the late miles of the Wasatch 100, I could not stop for rest even though my body craved a break like a claustrophobic craves Big Sky Country. The day’s sweltering heat had surrendered to the bitter, damp cold of the high mountains and, whenever I stopped or slowed down, my body shivered and shook spasmodically. The cold that I had so craved during the long day was almost my undoing that night. When I reached an aid station with a campfire, I stood so close to the flames that I charred the lower third of my jacket.

Snow, while beautiful when viewed through a window from the toasty confines of a couch, makes life hard on the trail runner. The word “post-holing” comes to mind. And winter is the season that I become a tree hugger, and not in the Al Gore sense. Embracing our timber friends is the best way to stop an icy slide that might send you careening into rocks. Plus, let’s not forget navigational challenges conjured by snow. In that same 20-mile snowshoe race, a different year, the front-runners followed each other across a frozen lake as snow blew sideways. Following the leader generally works fine, unless the leader goes off course in a whiteout. The pack arrived on the opposite shores at least a mile from their target, and no longer the leaders.

Cold gnaws at the runner’s bones. It is not angry, like a hot wind that baked me while running in Death Valley (and turned my water bottle into a soft, gelatinous form). It is evil and omnipresent, like the darkness of a crypt.

After five miles of strides over Styrofoam snow, I arrived back at home, as victorious and humbled as Lynne Cox stepping out of the Arctic Sea.

Two doors down, a car moaned, stopped and moaned again, straining to start. My body began to shiver. I wished more than anything that I could run in 100-degree heat.

Garett Graubins is saving up for a treadmill.