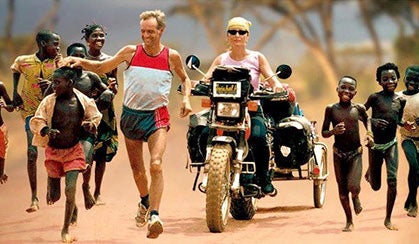 Photo courtesy of the author.

Editor’s Note: Serge Roetheli, a Swiss endurance runner, ran over 25,000 miles on his trek around the world, traversing 35 countries on six continents. His (then) wife, Nicole, accompanied him by motorcycle as they worked to raise awareness of the plight of children in developing countries.

Read on for an excerpt from his memoir, ‘The 25,000 Mile Love Story.’ Learn more about the book here. 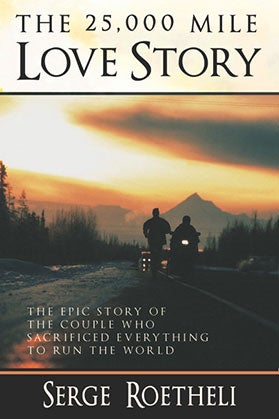 “Travel is fatal to prejudice, bigotry, and narrow-mindedness, and many of our people need it sorely on these accounts. Broad, wholesome, charitable views of men and things cannot be acquired by vegetating in one little corner of the earth all one’s lifetime.” —Mark Twain

Is it any surprise that running feels so natural? More than a million people run marathons every year. They lace up their shoes, pin on their numbers, and trek out on onto the pavement to boil out the 26.2 miles because something in their mind, body, and soul just feels right when it’s striding and free. Even when it’s bleeding, cut, twinging in pain, or cramping, the body is free and it is trying. And inevitably—if you keep going—you will always catch your stride.

There are many animals that are excellent runners. They’re shaped individually for swiftness. But humans are built for endurance. Harvard anthropology professor Daniel Lieberman said, “Humans are terrible athletes in terms of power and speed, but we’re phenomenal at slow and steady. We’re the tortoises of the animal kingdom.”

I don’t mind being the tortoise, though—to take the whole experience in with persistence and might. To see something all the way through rather than to give out in a bright, mad burst. In a way, we humans are suited for the big picture rather than the little one. The rule is simple and unchanging: Always keep going.

By the time we hit Switzerland, I could feel it in every part of my legs. They knew the trek was coming to an end. One stride after another sprang forward, and I was aware of the pavement bouncing off my toes, if perhaps only with slightly less enthusiasm than they had nearly five years ago. Each of my legs had by now plunged me forward over 33 million strides on this journey. But I was still moving forward, the springy tendons in my legs functioning like large rubber bands, stockpiling energy and then releasing it so I could bite off portions of the road. I should have been tired of running by then; I should have hated it even. But 18 miles under the belt that last day and there was no heaving, no great exasperation. My arms moved backward and forward, compensating for each other with each swing.

No, I would not say I was tired. The only thing I felt that day was able. 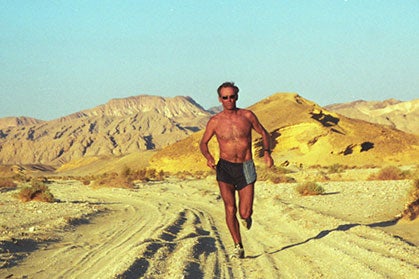 Photo courtesy of the author.

We turned a bend in the road and I saw what was the first glimpse of our hometown on the horizon. It’s such a strange feeling to return when all you’ve done for half a decade is go. You’d think I’d be relieved. And in a way I was. Whenever you leave a place, you are giving something up. People, memories, comfort, a sense of abiding security. Home is the warm blanket, the timber in the fire, the foundation that makes everything new and insecure grab a firm hold and grow. I love where I am from. And its reassuring silhouette reminded me that Nicole and I belonged somewhere. We no longer had to live out of an overnight bag, plunking down tents, and rapping on doors for meals. We no longer had to beg or be in need. We could hang up pictures and sleep in fresh, clean sheets. We, in a word, belonged.

Would it be possible to hide the pride I had running toward that corner of the world we were privileged to call home, watching the Matterhorn with its chiseled peak flexing in the sky? In Switzerland, I knew what to expect—the Aletsch Glacier, the longest in all of Europe. The railway lines that claw up the mountainside. The submerging contentment of the hot springs. The magic of the small towns and the people who inhabit them—those who are not distracted by the rapid success of the world, but who are enthralled by the success that has existed for years upon years in the valleys and on the mountains. I had seen too many people on this trip who were skimping by, hand to mouth, dwelling in shortage. Clothes worn down to bare threads, the fibers caked in mud. Houses built of scrap metal, cardboard, and wood. Piecemeal poverty and war dots the world like dandelions. It would be selfish not to feel blessed.

All the same, though, just as much as Switzerland is my home, in a way, the road had become just as familiar and comforting. The strangeness had become reassuring. And I had to wonder what life would be like waking up in the same bed—my bed—two days in a row. What would it be like not to push my mind and body to such a degree that it writhed not only in pain, but in satisfaction? How would I exist without the road? To leave this behind felt—in some parts of my heart—uncertain and wrong. Strange even. For me, running is second nature, as everyday as getting a cup of coffee, checking the mail, turning down the covers.

I looked straight ahead, the mountains jutting like sandcastles straight into the sky. I could hear my feet treading, left after right. A built-in metronome, they were the dedicated clockwork that kept me going. Sometimes when I think about it, I can’t believe all the places they’ve taken me. Through the Sahara, darting along the Great Ocean Road, sifting through the bustle of Times Square. Cape Town. Sydney. Portugal. Argentina. I have smelled, touched, seen, and heard the world wake up, witnessing the sun peel into a new sky each day, transcending time zones, languages, and customs. Running can take you anywhere. Running is, in a word, universal.

Leonardo da Vinci wrote that feet were “a masterpiece of engineering and a work of art.” And the man was right. It’s a madhouse down there—each foot is constructed of 28 bones, which is equal to one fourth of all the bones present in the human body. Not to mention the 107 ligaments, 30 joints, and 19 muscles. And all of those separate, unique pieces work together to move us forward, creating an unthinkably efficient, powerful, and strong composition. Our feet are our own integrated locomotives.

More than that, though, no two feet in the world have the same blueprint—not even your own. And they’re always altering, adapting to your height and weight, whether you’re standing or sitting, moving or pausing. Our feet are intuitive. They understand us. They want to help us get from point A to point B—whatever we decide those points might be, whether it’s a block away or worlds apart.

People might gawk at the feats of the Lance Armstrongs of the world. And there’s reason to, of course. But, like most modern-day endurance athletes, he hasn’t once mounted a bike or launched a feat without the diligent, watchful eye of his team who constantly screens, assists, and pampers. His training, schedule, and eating regimen are tackled with an uncanny precision. A Band-Aid always in wait for the most freshly developed paper cut. He has sponsors, physical therapy, the most advanced equipment, and techniques.

While I … well, I had Nicole. The beautiful, strong, courageous Nicole who rode beside me patiently, who could massage my feet to health, and who could scold me into persistence. She carried me in a way no amount of modern technology or knowledge ever could.

When I felt as though I should be wasted, as though my feet could not possibly carry me another inch, she recharged me. She got me back onto the road and surged me forward with all the simplicity and ease of a raging current.

It should be no surprise to me that two of the most natural human instincts—love and running—have propelled me through these six continents, these 25,000 very long miles. That they have intertwined to make the impossible possible. But if I have learned anything from these five years on the road, it is that while the world can be remarkably small, it is always infinitely vast in its miracles and beauty.

Editor’s Note: Serge writes that though he and Nicole separated after their “World Tour” together, his memoir is nevertheless a love story—”a love for the world’s roads and all the people who inhabit them.” In the epilogue, he writes, “People wonder how a couple that has been through so much can fall out of love. They think the World Tour tore us apart. But in the end, they’re looking at it in the wrong way. It is quite the opposite. The World Tour is what held us together for so long. We were bonded by a journey, by a hope and a style of life, and when that road came to an end, we gradually realized that ours had, too … I look back on our 18 years of marriage with a distinct feeling of thankfulness and pride.”

5 Reasons Why Athletes Can Embrace Aging