This cardinal rule was meant to be broken

Trail running, like all sports, has cardinal rules. For example: Thou shalt never don new apparel or use new gear on Race Day. … 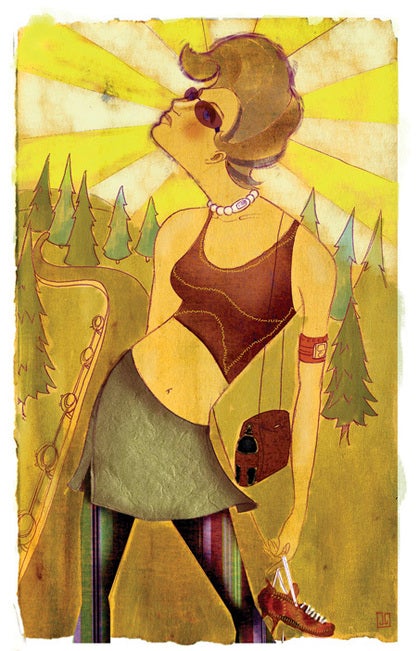 Trail running, like all sports, has cardinal rules. For example: Thou shalt never don new apparel or use new gear on Race Day. If it’s a sin to violate these off-road commandments, then I will someday land in hell—or a Texas road race in July, which I imagine is the equivalent. I first broke the rule several years ago, and I’ve done it many times since.

It was at the 2001 Western States 100 that I decided a splash of yellow would perfectly complement my ensemble. Yellow is bright. It screams summer. And, as I learned when I wore brand-new, super-high-split-cut-yellow shorts, it also attracts bees. Considering all the stings I suffered that year, plus the poison oak rashes, 100 dusty, sweltering miles was surprisingly tolerable. I somehow ran a buckle-worthy time while being mistaken for a pollen-packed flower.

For those who wear the same putrid white top (with faded blood stains over the nipples), salt-encrusted cap and socks with threadbare Achilles, you’re missing out. A fresh Race Day outfit can put cayenne pepper in your step or improve your chances of landing on the pages of Trail Runner (insider tip: photo editors love bright colors that explode off a page).

Maybe Alabaman Robert Youngren was aiming for a magazine cover when, in 1998, he dyed his hair a different color for each race—the Western States, Vermont, Leadville and Wasatch Front 100 milers—in the Grand Slam of Ultrarunning. And the 24-year-old didn’t stop there. He also dyed his socks, shirt and, occasionally, his shoes to match. My personal favorite: the noxious green that made him look like Green Lantern from DC Comics. It must have worked; he became the youngest action hero ever to complete The Slam.

If you try to wear anything new on Race Day, headwear is a safe bet 99 times out of 100. Frontwards or backwards, what can go wrong? Be forewarned about visors, though. Lately this version of sun protection has grown popular for reasons known only to my editor and the good Lord (one and the same when I need to get paid). These props of Satan are best left to the tennis courts. I donned one for a desert race in 2005 and paid the price with a sunburnt scalp that itched and peeled for a week.

From sun protection to warmth, always consider functionality when choosing your Race Day apparel. For example, don’t wear German lederhosen just because it’ll be funny—while others might laugh, cowhide is not breathable and you will not enjoy the crotch rub that occurs. Trust me.

Functionality—and the weather forecast—dictated a last-second wardrobe addition at the 2006 Wasatch Front 100. The weatherman warned of intense midday heat, so I accessorized my outfit with what became the best apparel decision I ever made: a chili-pepper-decorated bandana—and no ordinary bandana, at that. The back of it contained a spacious pocket and sponge that, when stuffed with ice cubes, helped me to endure the hot, punishing mid-afternoon miles that eat their Wasatch young.

Regarding functionality, “skorts” confuse me. Oddly, many runners are taking to these shorts-miniskirt hybrids. My wife loves hers. She claims it performs as well as shorts and she likes how it looks (I heartily agree, for the record). However, skorts do not look good on any one male trail runner, and I have seen a few wearing them at races in the same way that every college frat guy cross dresses at some point. Please, men, leave the skorts at home in the closet with your other skeletons and secret lusts — unless you have Scottish ancestry or truly believe that they help you to run better.

Finally, I must point out one disclaimer to the Functionality Mandate. The rule does not apply in late October, when runners enjoy license to dress for Halloween. That’s what I once did for a 5K. Inspired by a Far Side cartoon (punchline: “Bummer of a birthmark, Hal.”), I painted a red target on a white cotton tee and clipped novelty deer antlers to my head. This was as non-functional as you can find. I pranced to a pretty quick time, though. Only afterward did I wonder if it was hunting season.

Garett Graubins once wore a blonde afro wig and rainbow tights on a quick three miler. In doing so, he managed to outrun campus security.

I Found the Perfect Running Kit for Fall’s Variable Weather

Our Editor’s Favorite Gear in October