Ultramarathon runner Eric Spector, 71, of Palo Alto, trains on Owl Trail in Muir Beach, California, on Wednesday, October 3, 2018. On November 3rd, Eric will run Rio de Lago, a 100-mile trail run with 13,500 feet of elevation gain as he tries to qualify for the 2019 Western States 100 Mile Endurance Run, the granddaddy of ultramarathons. CREDIT: Ramin Rahimian for The Wall Street Journal 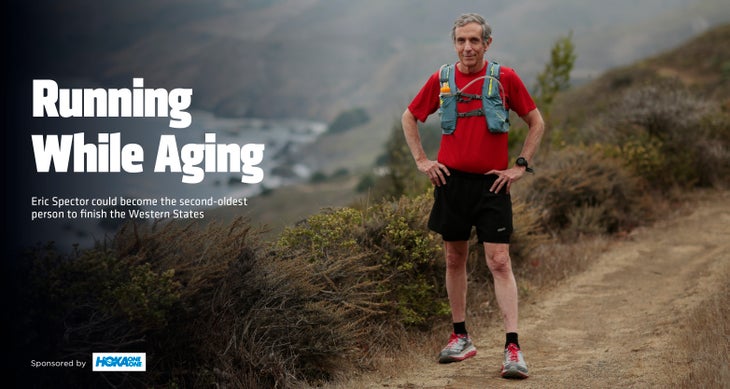 For more than 40 years, running has been a fixture in 72-year-old Eric Spector’s life. When he started, it wasn’t a slow progression of 5Ks, 10Ks, half-marathons and then longer races. No, his first race was the New York City Marathon.

He was in his early 30s, working more than 60 hours a week in his New York City startup. Fifteen pounds overweight, and overworked, he became inspired to run after two former classmates from Harvard Business School came to the city to do the marathon.

It was a warm day in October, and he got to run through the city streets with sun glinting off high windows while spectators cheered him and fellow racers on. He finished in 3:26, feeling great and with a smile on his face. Neither of Spector’s classmates, who initially inspired him, ever ran a marathon again, but, “I was hooked,” he says. 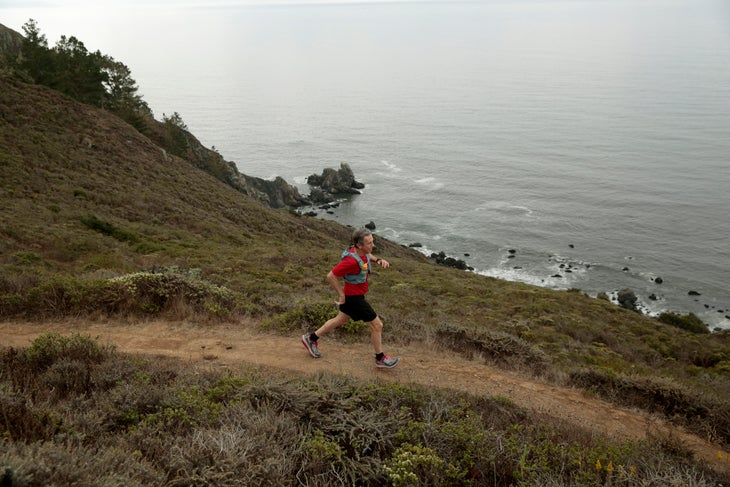 That first race sparked a life-long obsession with fitness and running that has brought Spector, who lives in Palo Alto, California, an envious opportunity: Now in his 70s, this summer, he could be the second-oldest person to finish the Western States Endurance Run, the world’s longest-running 100-mile race, which weaves through the Sierra Nevada mountains of California. In 2018 Nicholas Basset finished the race at age 73, a shy three months older than Spector will be on race day in 2020. The race is notoriously hard to get into since it only accepts 369 racers, and thousands more apply for the random lottery to toe the line. In 2020, a record 6,664 people hoped to be picked.

In each of the three years Spector has qualified for the Western States’ lottery, he’s attended the live drawing held at Placer High School in Auburn, California. The event is a gathering of ultrarunners, where the excitement sends the crowd into hoots, hollers and applause when the names of hopefuls, many of whom have been vying for the race for years, get pulled from the lottery bucket. This year, Spector returned to watch spots doled out, hoping that the measly less-than-five-percent chance would work out in his favor.

Before the lottery started, he was introduced to Jim Walmsley—who won the race the past two years and holds the course record with a time of 14:09.; Walmsley feigned agreement with Spector that he had a paltry chance of getting a spot in the race … then said, “I’ve got news for you; you’re going to run in 2020.”

“I was looking at him like, ‘What are you talking about?’” Spector says, “’The lottery hasn’t even started yet.’” That’s when Walmsley told Spector that HOKA ONE ONE, the race’s 2020 presenting sponsor, had awarded Spector its sponsor entry.

Spector started wearing HOKA ONE ONE shoes when they first came on the market in 2009. He had just started ultrarunning and found the increased cushioning and support very helpful. He quickly took to the Stinson model, and hasn’t used a different shoe since, despite trying other models and brands periodically.

Spector was delighted to get a bib number. “Western States, to me, is like the Super Bowl of ultras,” he says. He knew he had a limited chance to get in, not just because of the competitive lottery, but also because he assumes he has a narrow time frame to continue running ultramarathons. Although it will be his first time running at Western States, he’s preparing to finish strong.

Spector is already familiar with 40 miles of the course, because, in 2017 and 2018, he paced other racers in the second half of the course. This February, he’s doing a 20-mile training run to see more miles of the trail, and, in March, he’s running the Ruck a Chuck 50K, which follows part of the Western States trail.

“I will have some experience with the course, but likely not all of it, by race day,” Spector says. “It’s helpful, but the reality on race day is that you have to adapt to the conditions that day – the weather might be 70 degrees hotter than when you ran the canyons in training, for example, or many miles could be snow-covered. Adapting your plan to the conditions and your body’s feedback is what counts.”

“I was looking at him like, ‘What are you talking about?’” Spector says, “‘The lottery hasn’t even started yet.’” That’s when Walmsley told Spector that HOKA ONE ONE, the race’s 2020 presenting sponsor, had awarded Spector a special entry.

Warding Off the Aging Process

After Spector’s first marathon in 1979, he‘s run over 20 marathons in the US (including Boston twice), and several abroad, including even Shanghai and Montreal. . In 1988, he moved his business to Marin County, California. There, he discovered the oldest American trail race, the Dipsea Race, which covers 7.5 miles on single track in the Bay Area, and decided trails were the ideal running venue. It wasn’t until he turned 61, in 2009, that he started running distances longer than a marathon, and finished the Way Too Cool 50K, which ends in the town of Cool, California.

“Running is invigorating, when you are in shape,” Spector says. “And trail running takes you outside, so you can enjoy everything nature is throwing at you.”

Spector follows the latest science-based articles touting the benefits of staying fit and posts them (now over 350) on his twitter account, @fitatallages. The articles recount studies linking exercise to lower risk of heart disease and dementia, and improved neuron development and mood, to name a few benefits.

“Why would you not exercise, when the evidence is so overwhelming about its physical and mental-health benefits?” Spector says. “You stay more alert, and have more energy. It’s just a no-brainer to invest in your own health.”

Spector spends time swimming and biking in conjunction with running to maintain his fitness without overtaxing specific muscle groups and joints. Along with trail races and ultras, he’s finished a handful of triathlons, including an Ironman when he was 65. Plus, he always pays attention to developing his core stability. “Core drives form, form drives efficiency, and efficiency drives speed and endurance,” he says. 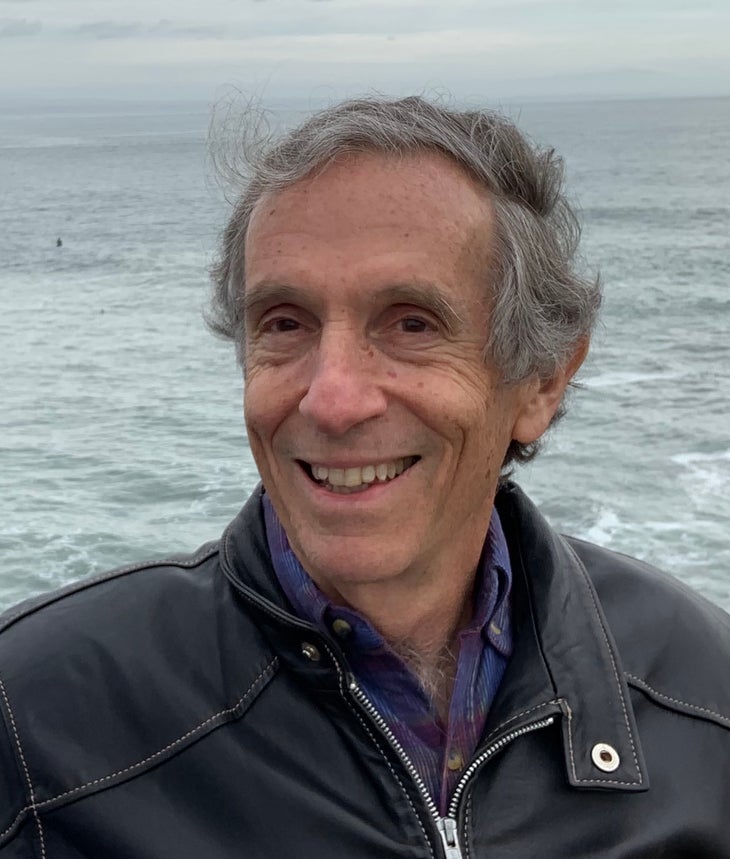 Runners start paying closer attention to age groups as they get older, Spector says. He holds age-group wins in 50K, 100K and 100-mile races. “We have a little advantage at that point,” he chuckles, “given fewer competitors.”

He rattles off age-category records for various races, with many statistics memorized. “Ray Piva set the [70-and-older] record at Western States 22 years ago, in 1998, with a time of 28:09. He was a pretty storied runner in the Northern California scene back then,” Spector recalls. Piva was 71 years old. “No one has touched that record since.”

Some of the challenges of running over 70 include a lower capacity to process oxygen, which diminishes muscle performance and speed. At Spector’s age, planning becomes even more necessary, because he has to accommodate more recovery time between long runs in order to avoid injury. It can take up to twice as long to heal an injury, such as a fracture or muscle pull, than for someone in their 30s. Spector says warming-up and cooling-down exercises have also become more crucial for him.

“Doing exercises before and after you run are important for all athletes, but for older athletes it’s a defensive must,” he says. “When you’re younger you can gut your way through something when you’re really tired and things are falling apart. But for an older person, in these long ultras, you really have to pay attention to the posture and mechanics.”

And Spector has experience with ultramarathons gone wrong. In 2016, he ran his first 100-miler, the Javaelina Jundred in Fountain Hills, Arizona. Temperatures exceeded 104 degrees in the Sonoran desert, and heat exhaustion ultimately led him to drop out at mile 91. It was his first DNF in all his years of running.

Two years later, at age 71, he made his second attempt at 100 miles in the Rio del Lago 100 Mile Endurance Run, and secured the record for the oldest person to finish that race.

“I was not nearly as well informed in 2016 about what was important to running and finishing an ultramarathon. And if you miss any of the important items, chances are lower that you will make it to the end,” he explains. All those things—pacing, adequate fueling, proper hydration, electrolyte balance, not falling or getting injured—are even more essential for older athletes.

And when Spector isn’t racing, he finds joy immersing himself in the running community. He regularly volunteers at aid stations and as a pacer. He’s volunteered at the Rucky Chucky Western States aid station two different years. This spring, he’s volunteering at an aid station for the Quicksilver 100K, a South Bay, California race. Pacing and helping at aid stations is Spector’s way of contributing to the camaraderie of ultrarunning, where everyone looks out for one another while on trail.

The ultimate reason Spector finds joy running longer and longer distances? “If you find a sport that you love and it feels good and brings fitness, then you just need continue to stick with it for the long term.”