The secret to motivation? Google it.

In the winter of 1999, a portly man de-motivated me from many intended evening runs. No, not the bearded one in a red suit. … 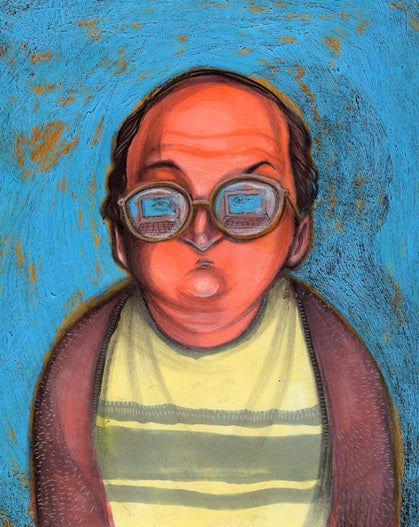 In the winter of 1999, a portly man de-motivated me from many intended evening runs. No, not the bearded one in a red suit. This character went by the name of George Costanza. I’d slump into the couch after work, click on the boob tube, and watch him, Jerry, Kramer and Elaine go about their angst-ridden shenanigans.

The local Fox affiliate had the audacity to show “Seinfeld” reruns back-to-back-to-back on weeknights. Beginning at 5:30 in the evening, my couch took on the gravitational pull of Jupiter. “Get Uranus over here, boy,” it would beckon. “You’ll only go running when me, Newman and the Soup Nazi say so.”

By the end of that winter, I resembled Costanza, too. And I had an ambitious race calendar on my plate. Something had to give.

It was spring when I discovered the Internet. I had thought it would be a passing fad, like Tae Bo or the Taco Bell Chihuahua. But I finally caught up to the times, thanks in large part to my employer or, more specifically, my employer’s Internet connection.

It began innocently enough, as I checked race results from the past several years. Then I found first-person race recaps. Soon I was a burgeoning student of races coast-to-coast. It was always easier to read hard copies, so I’d hit the “Print” button, hustle over to the network printer, and hope that my documents weren’t hidden within my superiors’ annual reports or client memos.

Although this hide-and-seek charade likely hurt my own annual performance reviews, I found motivation in those online recaps, and it sparked my training when I needed it most. The pounds came off quickly and I felt like I was once again the master of my domain.

Since then, the Web has evolved, “Seinfeld” has gone the way of “I Love Lucy,” and my running, not coincidentally, has progressed. My Costanza-esque spare tire has stayed away, and I credit the constant stream of motivational sparks by way of my Internet browser.

On YouTube, a quick search for “trail running” yields footage from training runs, gear reviews and tips from some of the sport’s pros. If I’m headed out for a long training run, the key words “ultra running” are guaranteed to fire me up. The best video I’ve found is a montage of running highlights set to Cold Play’s “Viva La Vida” (www.coachingendurance.com).

Blogs are loaded with more first-person race accounts, photos, race reports, and videos than are possible to read. And I should know. I dive into recaps of epic runs across the Grand Canyon, around Mount Rainier, or on the Colorado Trail. When the leading ultrarunner Anton Krupicka notes his 200-mile weeks, my measly 60-mile-per-week goals suddenly become very realistic. The same rule applies when he writes things like, “3700 feet of ascent in five miles has become routine for me.” My local 2,000-foot climb shrinks to an anthill. Karl Meltzer’s blog (www.karlmeltzer.com) regularly lists odds for the big races, stoking Race Day excitement like a Vegas sports bookie or espn.com. Who knew that it was possible to get motivated by runners living thousands of miles away?

Most race and corporate websites have caught up with the times, too. Many races host live webcasts or offer Twitter updates. Companies host video libraries (check out The North Face), hype up their events and foster online communities where cyber-surfers like myself can discuss everything from footwear to nipple chafing.

I often joke with my trail-running pals that all of this online motivation can be a distraction during the work day, when thoughts wander too easily to the next weekend’s race or high-country training run. One friend, an attorney, was even warned by her employer to cut back on “non-client-related Web use.”

Other friends, whom I’ll leave nameless, admit to Googling themselves every now and then. I guess they’re trying to find motivation from their past race performances and results. I personally try to avoid that motivational tactic, though. Maybe it’s an old wives’ tale, but I’ve heard you can go blind if you Google yourself too much.

That actually sounds like a good plotline for a Seinfeld episode.

If his current employer reads this story, Garett Graubins only checks race reports, blogs or trail-running sites if they happen to be work-related. Honest.