One Friday afternoon at work at the Fleet Feet store in Bend, Oregon, I mentioned to my boss, Rod Bien, … 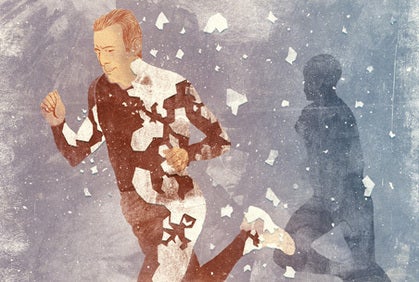 One Friday afternoon at work at the Fleet Feet store in Bend, Oregon, I mentioned to my boss, Rod Bien, about plans for an 18-mile trail run the next day.

“Hey! I’m doing 20 up at Smith Rock tomorrow. Why don’t you join me?” Rod replied excitedly.

Oh crap. I consider myself a decent runner, but definitely a mere mortal compared to Rod Bien, a professional ultrarunner who has finished over 50 ultramarathons, including two sub-20-hour finishes at the prestigious Western States 100-Mile Endurance Run. Perhaps more impressive is that he once ran 30 miles one day and another 20 miles the next day … on a treadmill.

My legs went rubbery at the thought of trying to keep up with this endurance fiend for 20 fast miles, but I was afraid to turn him down. I searched my mind for a believable excuse before blurting, “Uh, it may be too ambitious for me to run that far with you.”

My fate was sealed. That night, while packing my gear for the run that would surely kill me, I grabbed my maximum-caffeine energy gels, figuring I needed every possible advantage. Lying in bed that night, my mind ran through various hypothetical scenarios, none of them good.

You see, Smith Rock is a runner’s nightmare. One exemplary trail section is called Misery Ridge, a three-quarter of a mile series of calf-killing switchbacks on loose cinder rock. Smith Rock is located in Oregon’s high desert, where the trails weave around bulbous outcroppings and tall and orange-hued rock spires and scraggly juniper trees and sage brush dot the landscape.

If Rod’s pace didn’t do me in, then Smith Rock’s poor footing and rugged terrain surely would. A classic over-analyzer and pessimist, I went to sleep that night anticipating the worst.

My pessimism deepened when I awoke on Saturday morning to freezing rain and ice-covered ground. But neither Rod nor I was going to bail, even if it were hailing fire balls. We began with a two-mile gradual climb up a singletrack trail that instantly put me into oxygen debt. My nose hairs froze and feet spun out on the ice as I jumped from rock to rock, trying in vain to achieve some kind of rhythm.

After just 20 minutes, my hands were as numb as if they were submerged in an ice bath. I worried about frostbite and the possibility of amputation. If only I could’ve married before becoming an amputee, I thought. I wondered why Rod wasn’t complaining about his hands. Then I noticed the half-inch-long “booger-cicle” hanging from Rod’s nose. I stifled a laugh and relaxed a little.

We descended into a 100-foot-wide slot between sheer red-rock walls that Rod called Cougar Canyon, where mud glommed onto our shoes like wet cement. Rod recounted the story of running here a few years back, when he came upon a freshly killed cow. The cow’s right-shoulder skin was pulled away from the muscle and fresh blood gushed from the wound. Rod realized that he had interrupted the feast of Oregon’s most-feared predator. Not wanting to be a second dish, Rod took off down the trail, screaming like a little girl to scare off the unseen cougar. Listening to this harrowing tale, I added a fear of becoming cougar kill to my list of worries.

As we continued, my athletic disadvantages became apparent. Rod’s VO2max and lactate threshold exceed to mine and he runs more than I do. We were averaging an eight-minute-per-mile pace, but, on this terrain and 3000-foot elevation, the effort resembled six-minute-per-mile pace. Can I run 20 miles at six-minute pace? No. Something had to give. Rod offered a few colorful analogies for what we were feeling.

“This is when my legs start to feel marinated,” he said.

“My legs skipped marinating and plunged straight into the deep fryer,” I replied.

“This run is kind of like an onion: the hills peel you away one layer at a time until you have nothing left.” I only hoped that I was a bigger onion with more layers than I thought.

We began to ascend what Rod calls (cue slasher-movie music) … The Scar. The Scar is an 800-foot near-vertical climb with no apparent trail. For balance, I grasped at rocks and tufts of dead grass. By now, so few oxygen molecules were flowing to my brain that I accepted my fate, much like the Titanic musicians who continued playing their instruments in the face of certain drowning. Don’t think about the pain, don’t think about Rod, just move forward, I said to myself.

As we ticked off the miles and 1000-foot climbs, blood, sweat and tears flowed from me while Rod remained impervious. Eventually I saw the car. Oh, sweet baby Jesus, we were done! At first I was relieved. Then I started to feel like a big deal. You might as well call me Survivorman.

“So, do you consider that a typical training run?” I said on the drive home.

“Yup. It doesn’t get much better than that,” Rod replied.

Rod suggested we stop for a bite to eat. While devouring handfuls of tortilla chips bathed in guacamole, sour cream and cheese chunks, I felt an unusual sense of peace. To be honest, running lately had become a chore. To achieve faster race times, running had become a means to an end, an obligation or ritual. I no longer enjoyed the experience of running.

But today I was like a beat-up, worn-out race horse that was suddenly released from the stable to run wild and free with a mustang. It may have been just another run for Rod, but it was a breakthrough for me. I ran with the best, finished on my feet and discovered that my onion does have many more layers to it. My running will never feel the same.