Traveling to trail race, or trail racing to travel

I woke up this morning and realized I may be having too much fun. … 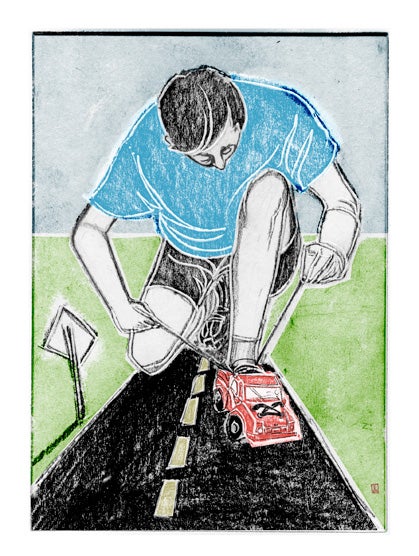 I woke up this morning and realized I may be having too much fun.

And what, you may ask, is my problem?

I’m a huckin’ runner, an easily distracted individual who negates responsibilities and throws caution to the wind just to run. It’s an impulse, like spotting a trailside boulder on a run and catching big air off it, just for fun. It gets to be habit over time.

It all started years ago. I met this woman who was a runner, so I became a runner, too, and we’ve been running ever since. Now I find my days are consumed with running. When I’m not running, I’m cross training. I write about running, do paintings of runners, take pictures of runners and plan vacations around running. I run for my money and give others a run for theirs.

In return, running has given me deformed toenails, colossal calluses, frostbite, torn tendons, a limp on rainy days, a marginal bank account and an unrelenting desire for more of the same.

Last week my girl and I decided on Wednesday afternoon that we were going to drive 1200 miles to Minnesota to compete in another championship race (the U.S. National Snowshoe Championships) on Saturday morning. We packed Wednesday night, and were on the road early Thursday.

Our charted course followed grasslands along the Platte River. The great snow-geese migration was underway and we witnessed thousands upon thousands of honking birds overhead. It was so beautiful I barely noticed when, at a lakeside rest area, a glob of goose poop splattered my leg from a quarter-mile up.

Like a pair of high-plains drifters (with stained pants) we rolled our four-wheel wagon northeast, singing country-western songs, soaking up scenery and imitating radio D.J.’s for entertainment. “On the trail again, goin’ places that we’ve never been…”

We found out-of-the-way trailheads on cottonwood creeks and slept in the back of the car. It wasn’t The Ritz, but I for one enjoy going to sleep looking out at twinkling stars while listening to a rushing brook, restless geese and howling coyotes.

We arrived in time to preview the courses on Friday, and raced Saturday, then reconnected with trail-running friends and acquaintances from all over the country.

I noticed nearly everyone was smiling. We were having fun being runners on that beautiful sunny day in the Minnesota woods, on another great adventure; and adventure is what brought many of us to running in the first place. Exploring new forests and seeing new trails has never gotten old.

That’s why we left faster than lunch from a supermodel after awards and took an off-kilter route home. We explored the sun-baked Badlands of South Dakota on a casual afternoon run and saw bison, coyote, deer and a thousand-pound gopher at a roadside tourist trap. We spent the evening at Devil’s Tower, Wyoming, running in the fading light at sunset.

We met an adventurous couple from Alaska who came south to be the proud new owners of the restaurant at the Devil’s Tower entrance. They let us camp in their back lot, and we swapped Alaska stories from past running trips.

We were up before dawn, hiking deer trails east of the Tower where we saw a field full of real gophers as well as whitetail deer grazing below. By midday we were on the grass prairies with hundreds of high-speed jackrabbits, pronghorn and truckers. By early evening we were back home in bed, discussing running plans for next weekend.

Another trail runner, Peter Maksimow, passed along this gem of a thought from his 14-country tour of Europe last year: “Life is now.”

It’s about living in the moment, because sometimes you just need to get out there and bite off a big, juicy slice of life and not worry about the stuff dripping off your chin, or the stain on your pants. Trail running takes you places, and sometimes getting there and back really is half the fun.