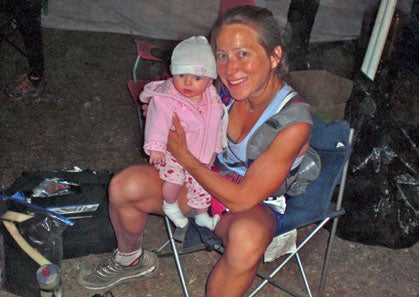 The author and daughter Amelia at the 2013 Rocky Raccoon 100 Miler.

I was torn last year when I learned I would not be able to run the Hardrock 100 in July 2013. I had earned one of the race’s coveted 140 spots and it was painful to give it up. I had good reason; I was pregnant, and my consolation prize—my daughter Amelia Louise—was well on its way.

Instead, I signed up for the 2013 Rocky Raccoon 100-Mile Endurance Run, which would take place just four months after Amelia was born. The joy was in the training process—as many miles as the doc would allow during pregnancy, the climbs up to 14,000 feet with my pal Brian at eight months pregnant, the stroller runs with Amelia after birth and the few trail runs with my husband, Scott, when we had grandparents watching Amelia.

How does one train to run a 100-miler just four months post partum? After the experience of childbirth, the thought of running an ultra seemed almost trivial. The experiences are similar, however—the pain is quickly forgotten, and you begin planning for the next one.

While training for Rocky Raccoon, I ran with purpose. Gone were the days of spending weekends on the trails to train, replaced by stroller runs on flat gravel or pavement. That, in itself, took great mental power, as I generally refer to running in the city as urban suicide.

Nonetheless, it was time with my daughter that I cherished. As quickly as she is growing, she’ll be on trail with me soon enough.

Like other races, I lined up at the start of Rocky Raccoon well trained, mentally prepared and with a plan. Unlike other races, though, I could not anticipate how my body would respond to the fact I was nursing (pumping) on trail. In hopes of keeping up my milk supply for Amelia, I was planning to pump every four hours.  I must say it was a bit easier to feed Amelia in-utero.

The pump first came out at mile 20, and that is when the commentary from the other runners, volunteers, and spectators started flying. I became a celebrity among mothers and fathers who understood what I was doing.

As a European, I am not ashamed at being slightly exposed. We often talk about bodily function—well, more often bodily dysfunction—on the trail, so to me, this was no different. Actually, pumping was a far more controlled process than other bodily maladies that can afflict us unexpectedly in later stages of a race.

Pump assembly took about five minutes each time, and forced me to walk so I estimate I lost about 20 minutes every 20 miles. I also took time to play with Amelia at each turn-around. She gave me the inspiration to not worry about what others were thinking, and the energy to tackle the next 20 miles—more than any grilled cheese or peanut-butter pretzel could ever offer.

Runners were amazed, baffled, inspired and, in some cases, perhaps grossed out. Some probably thought I had gone well past the point of reason, but we all know that part of the joy in ultrarunning is the challenge to endure, to push past the point of comfort and even exhaustion.

The first three laps (60 miles) felt great. I was well on track to finish sub-24 hours. At one point, I tripped on some roots and pulled my groin. The fall hurt and I cursed like a sailor. But I got up, thinking of Amelia’s smile, which kept me pressing forward.

I kept up a strong pace until mile 92, but nutrient depletion eventually reared its ugly head. I got dizzy coming into DamNation aid station, then blacked out for a bit. I had to wait until my blood sugar rebounded.

An hour-and-a-half later, I finally headed back out of the aid station, and it felt like rigor mortis had set in. Everything in my body had stiffened. I cried. I had run so well for so long, had pumped five times and pushed through a pulled groin, lost unexpected time at the aid station and now this!

But I had not come 92 miles to not finish the race. I put my sights on the smile I would see on Amelia’s face at the finish line. I could sit down with her and just revel in the accomplishment. This inspiration kept me moving. Of course, so did others on trail. That is the beauty of ultrarunning; even in the darkest moments of despair, you are never alone.

After the race was over, the race director, Joe, presented me with a Rocky Raccoon 2013 award for “Most Miles Breastfeeding”—which now sits on my mantle at home. I had placed first in the “breastfeeding division!”

I still want to run Hardrock, of course. Hopefully the lottery will be good to me in years to come and I will get my chance to run that rugged course in the San Juans that I love so much. However, my finish at Rocky means more to me now than a Hardrock buckle. Amelia and I finished this race together.

Now, all you new mothers—go run and fear not; the mind will take you places you never imagined and the body will follow suit.